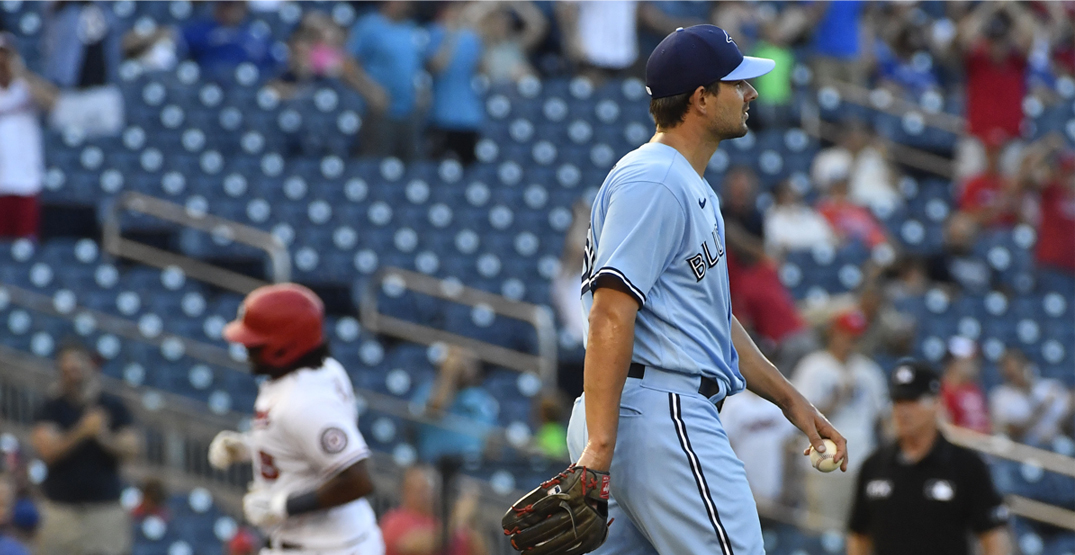 Being a Toronto Blue Jays fan in 2021 might qualify as cruel and unusual punishment.

It’s been thrilling to watch one of the deadliest lineups in the American League punish opposing pitchers. It’s also been agonizing watching the team squander late game losses, blow extra inning games, and to witness their bullpen implode in gruesome fashion.

“Roller coaster” doesn’t begin to describe the spectrum of emotions experienced this season.

At the end of the year, a loss is a loss, but the most painful games are the ones where a team is only an out or a strike away from completing a victory. The Blue Jays have experienced their fair share of those heartache-inducing losses.

To help laugh through the pain in true Joker fashion, let’s rank the Blue Jays’ most tortuous losses of the season. To paraphrase and alter an infamous Darren Rovell tweet, “I feel bad for this team, but this is tremendous content.”

Pushing a game into extra innings is tough enough, but when it happens in your home ballpark, it feels like momentum should be on the side of the home team. For the Blue Jays in extra innings at home, not so much.

For a while there, the Blue Jays’ rebuilt their shaky bullpen on the fly, and it looked like their relievers might turn the corner. But in August, they’ve reverted to their old ways.

The Blue Jays added Brad Hand at the trade deadline as some veteran left-handed stability for the back of their bullpen, but he’s been unreliable in several high leverage spots. His latest implosion was an appearance against his old team, the Nationals, when Hand surrendered two home runs.

A walk-off walk might be the most anti-climactic way to celebrate a victory, and conversely, if you’re the team issuing that free pass that scores the game-winning run, it’s one of the most painful ways to lose.

That’s exactly what happened to the Blue Jays in Seattle a little over a week ago. Clinging to a 2-2 tie, the Blue Jays went to their new lefty reliever in Hand, who walked in the winning run on four straight pitches.

Let’s also mention that Breyvic Valera attempted to score the go-ahead run on a pop-up to the third base side. On the field, the umpire ruled Valera safe at home, only to have the play overturned by replay.

I fell asleep and missed the end of the game, but you're telling me this is conclusive enough to overturn the play on the field? Even with replay, it's still debatable. pic.twitter.com/LwG85Fvta7

So, instead of clinging to a one-run lead, the Blue Jays’ bullpen melted down in the bottom of the frame and allowed the hometown Mariners to celebrate a much-needed win against their closest Wild card competitor. Talk about a gut punch of a loss.

If you’re noticing a pattern of certain relievers involved in these meltdown losses, you’d be correct. Tyler Chatwood authored several of these blow-ups himself, and his five walk performance against Cleveland was one of the worst of the season.

Chatwood came in relief of Steven Matz and escaped the sixth inning, but Blue Jays manager Charlie Montoyo elected to bring his reliever back out for the seventh inning, and that’s when the wheels fell off.

He issued four consecutive walks, allowing the tying run to score, and by the time Montoyo went to the bullpen again, it was far too late as Cleveland capped off the walk-off victory courtesy of a Jose Ramirez sacrifice fly.

Typically, out-hitting the competition 16-8 would be more than enough of a margin to secure a victory, but not in this case. The Blue Jays hit the ball all around Fenway Park during this 6-5 loss, stranding a season-high 13 runners on base.

In fact, the Blue Jays are one of only four teams this year to collect 16 hits in a game game and lose (they’ve done it twice this year). Alex Verdugo’s walk-off single was the final nail in the coffin for the Blue Jays that fateful day in Boston.

It’s never a simple affair whenever the Blue Jays play the Rays, and this was the quintessential tough loss for Toronto against one of their division rivals.

Clinging to a 4-2 lead in the ninth inning, the Blue Jays had a bullpen meltdown for the ages as Chatwood and Travis Bergen combined to walk four straight Rays batters. Bergen alone walked in the tying and eventual go-ahead run.

It might be a bit of recency bias given that this was the freshest dagger of them all, but the Blue Jays’ 5-3 extra innings loss to the Tigers yesterday felt like the worst of the season.

The Blue Jays were one routine throw away from winning the game, but the typical sure-handed Marcus Semien bounced a throw to first base, which allowed the Tigers to tie the game.

As it went into extras, the Blue Jays tied the game in the tenth inning, the Detroit pulled out ahead courtesy of back-to-back doubles in the 11th inning. Quite the stark contrast from two weeks ago when the Blue Jays were riding high from that 9-2 homestand.

To make matters worse, Kirby Snead had two outs against the Tigers and was one out away from handing it over to the Blue Jays’ offence to send the fans home. To make it even worse, this was a winnable game against a beatable team at a crucial juncture of the schedule.

And that’s why Sunday’s loss was the most agonizing of the season for the Blue Jays.