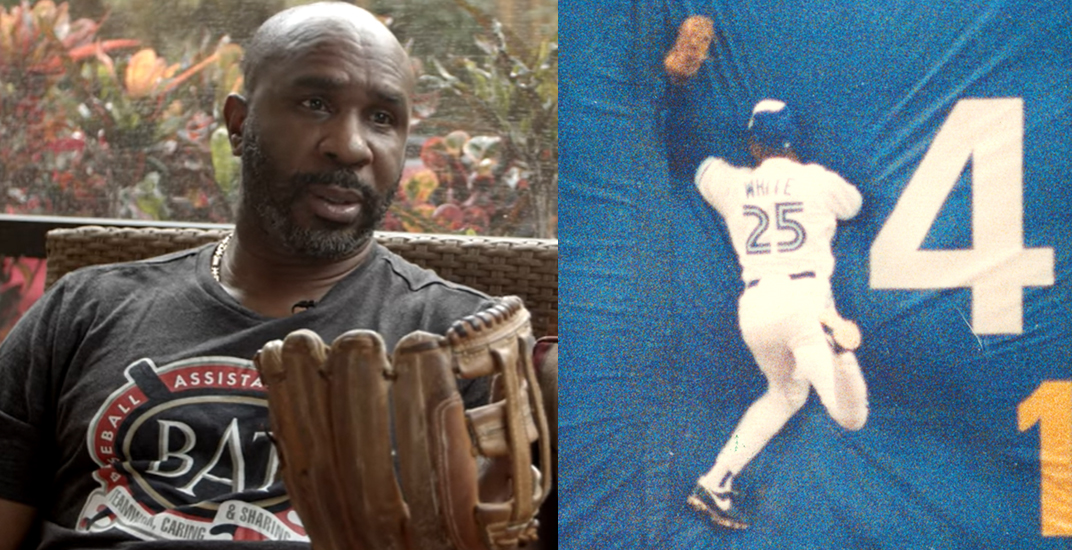 You can own an exclusive piece of Toronto Blue Jays history, albeit for the price of several thousand dollars.

Former Blue Jays outfielder Devon White is auctioning off several items from his extensive collection, including the only glove he used during his 17-year MLB career.

“This glove has gone through war with me,” White told Heritage Auctions in the video below.

This very glove was used during a play affectionately referred to as “the catch” from Game 3 of the 1992 World Series. It’s the catch that triggered the would-be triple play by the Blue Jays against the Atlanta Braves.

Nearly 29 years after one of the most famous moments in Blue Jays history, White recollects how the play unfolded from his perspective in centre field.

“I just got on my horse and went back and wasn’t thinking about much,” White told Daily Hive. “I’m like: ‘If it’s in the park, I’ve got to catch this ball.'”

The former Blue Jay made the catch look effortless, but arguably the most impressive part of the play was the fact that White had the presence of mind to hit the cut-off man and get the back to the infield as soon as possible to double up the runners.

“I tell everyone, it’s the throw after; I had to hit the cut-off man,” White said. “I’m a basketball fan, and you can shake somebody and make a great move, but if you don’t finish the play, it doesn’t mean anything. You’ve got to make the basket. The throw was the basket to me.”

The glove followed the five-time Gold Glover throughout his career from 1985 to 2001, and it even predates his MLB career because White started breaking the glove in during his minor league days. This was his game glove, it never saw practice, and he only used it during warmups and games.

From the exterior, the glove looks like a piece of equipment that’s nearly two decades old, but it was handled with care over the years. White put a lot of time and effort into keeping his glove in pristine condition, treating it with Saddlesoap every offseason and putting a baseball in the pocket during the winter. He also forbid his teammates from putting their hands on his mitt.

Plenty of would-be rallies and runs were snatched away with this glove worn by 7x Gold Glove centerfielder Devon White, the only glove he used during his entire career! It has heavy wear, repairs and the gold Rawlings label reserved for Gold Glove winnershttps://t.co/8t3tc1o9jW pic.twitter.com/fqwtqSEaYd

All these years later, rather than allowing these items to collect dust in his attic, White wanted to put these items up for auction and let someone else to receive some joy out of these pieces of memorabilia.

“It’s not like I look at them every day; they’re put away,” White said. “I’ve accomplished those tasks. I’ve won them, and I’ve worn them. It’s time to give it to a person who’s really interested in memorabilia, especially in Canada. They can tell the story of what they saw and where they were at the time.”

Besides the glove, fans can also bid on White’s 1992 and 1993 World Series trophies with the Blue Jays, his 1997 World Series ring with the Florida Marlins, his 1989 and 1991 Gold Glove Award trophies, and several game-used bats and game-worn jerseys.

One interesting fact about the World Series trophies is that these were purchased by White in 1992 and 1993, not given to him. Back then, players had to pay out-of-pocket if they wanted these pieces of memorabilia after winning a World Series. They’re hefty pieces of hardware and White estimates they weigh around 20 to 25 pounds a piece.

“Both the glove and the World Series trophies, those are my darlings,” White said.
“Those are the ones that were tough to part with, but I think some of the fans and collectors out there will really appreciate those things.”

A portion of proceeds from the sale of this memorabilia will benefit the Canadian Cancer Society. Bidding on the Devon White Collection ends this Sunday February 23 at 9 pm ET / 6 pm PT and prospective buyers can place bids online through Heritage Auctions.