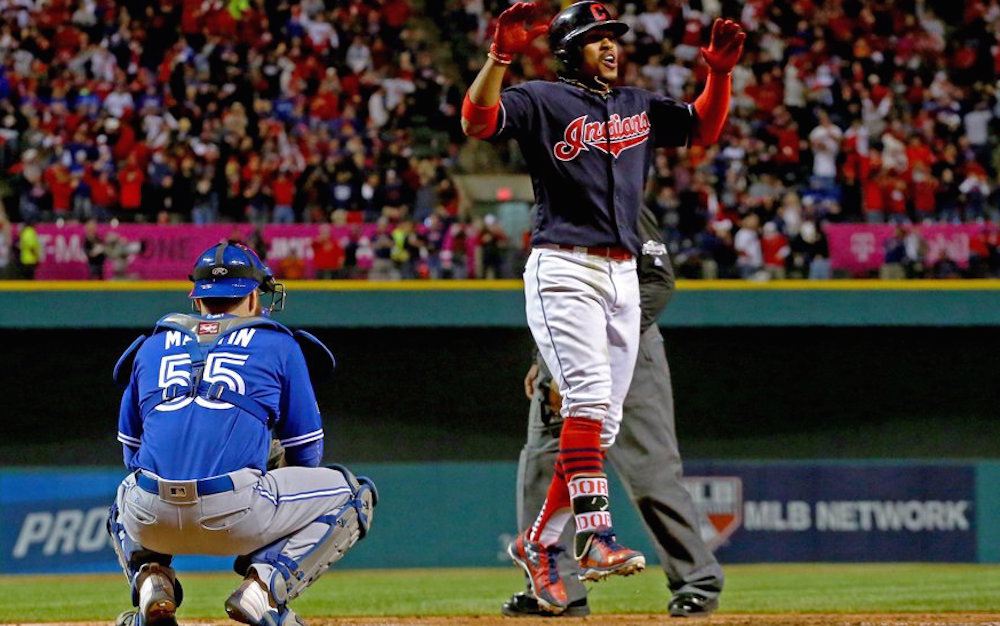 The Toronto Blue Jays dropped a pitcher’s duel in Game 1 of the American League Championship Series, losing 2-0 to Cleveland.

For the Blue Jays, it’s their first loss of the 2016 postseason. Cleveland by contrast is undefeated in the playoffs, improving their record to 4-0.

The Blue Jays got runners in scoring position with regularity in the first four innings. Unfortunately, they couldn’t cash in.

By comparison, Cleveland was unable to get a runner in scoring position until the fifth inning.

Edwin Encarnacion followed up a Josh Donaldson single with a double in the first inning. That put runners at first and third with one out. Jose Bautista and Russell Martin both failed to drive in the opening run.

In the second inning, the Jays got a one-out single by Michael Saunders, followed by a walk by Kevin Pillar, to put runners at first and second. Devon Travis hit into the inning-ending double play.

With two outs in the third inning, Encarnacion and Bautista both got on base with a single and a walk, respectively. But for the third straight inning, Cleveland starting pitcher Corey Kluber was able to get out of a jam, striking out Martin.

Toronto stranded another runner, Saunders, in the fourth inning as well.

Devon Travis returned to the lineup for the first time since Game 1 of the ALDS. Unfortunately, he didn’t finish the game.

Travis left in the bottom of the fifth inning, appearing to reaggravate an injury while covering first base.

Cleveland gets on the board

Cleveland got on the board first in the sixth inning.

After Jason Kipnis walked, shortstop Francisco Lindor connected on a one-out Marco Estrada changeup for a two-run home run. It was just the fifth hit of the game for Cleveland.

The last good chance for Toronto to get on the board came in the eighth inning with the meat of the Blue Jays lineup coming up.

Donaldson led-off the inning with a single, the first hit off Miller. Nice start.

Cleveland used three pitchers for a tidy evening on the mound.

Kluber pitched 6.1 innings, giving up six hits. He got into trouble early, but was able to get himself out of a jam multiple times. He was relieved by Andrew Miller, who struck-out five of the six batters he faced. Cody Allen came in to pitch the ninth, and was perfect to finish off Toronto.

Estrada was excellent for the Blue Jays in a losing effort.

His one mistake cost him, but he gave up just six hits and one walk on the evening.