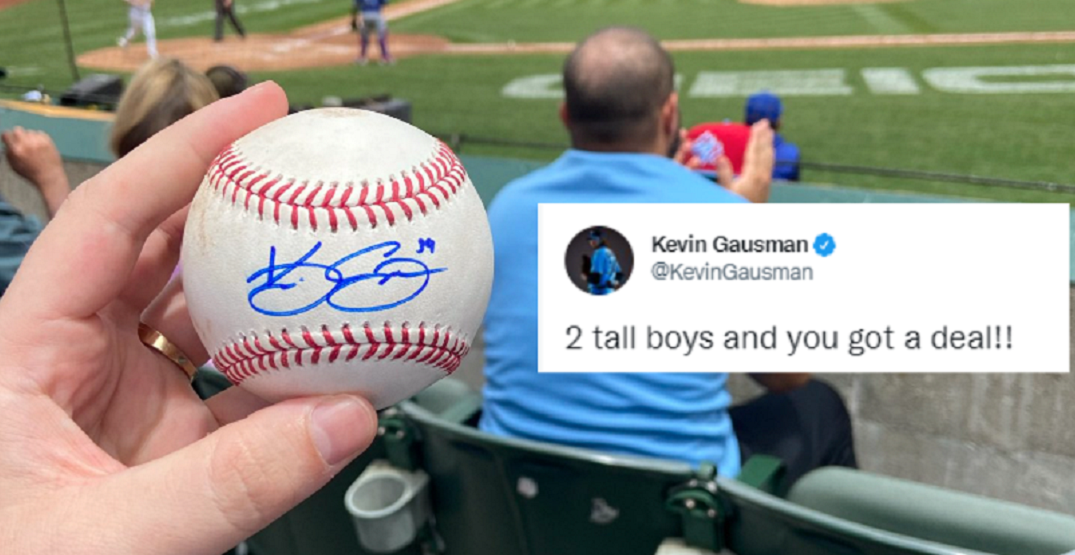 When Toronto Blue Jays fan Aaron Fitzner decided he wanted to get a few autographs from his favourite players, he turned to a unique option: impress them by chugging a couple beers.

Attending the Blue Jays’ games last week in Oakland against the A’s, Fitzner had a pair of targets in mind: Toronto starting pitchers Alek Manoah and Kevin Gausman.

“My mom and I were sitting in the field level seats, which are the seats right beside the dugout. With those seats, you get three free beers,” Fitzner told Daily Hive. “I saw Alek Manoah walking by us on the field, and I yelled, ‘Alek, I paid $200 for this seat so I could get free beer and your autograph, but so far I’m only halfway there!’ Alek didn’t budge.”

“I went and got a new beer, then got Alek’s attention and yelled ‘I’ll chug it for your signature.’… I chugged it, it was only a regular 12 oz can, and [he and Gausman] clapped.”

Sure enough, Manoah signed the baseball card and Fitzner’s empty can.

“ALEK! I’LL OPEN AND CHUG THIS BEER FOR YOUR AUTO!”

He proceeded to sign my card AND my empty beer can! @ClutchRipz HOW SICK EH?! pic.twitter.com/JcxkUtroEP

Sitting in new seats the next night (sans the free beer), Fitzner wanted to try his luck once again. With Gausman laughing next to Manoah for the first beer-for-autograph exchange, he figured he’d try to get the pitcher’s attention on Twitter.

Gausman saw the tweet, but offered him a double-or-nothing offer: “[Chug] 2 tall boys and you got a deal!”

“I was totally fine with downing two tallboys, but slightly hesitant since beer is expensive at ball games.” Fitzner said. “But, worth it.”

Fitzner ran into an issue: he could only find 24 oz beers at the ballpark, rather than the standard 16 0z tallboy. But a promise is a promise, he thought, and decided to buy both beers and make his way back down towards the Blue Jays’ dugout.

“So I got Gausman’s attention and he definitely remembered me from the night before, and the tweet exchange, because he signalled towards me right away,” Fitzner said. “He told me to chug it, so I did, and walked over for his autograph thinking I was home free.”

“The first thing he said when I walked over was ‘I said two, not one,’ I replied, ‘Man, I’ll die,’ which I was obviously joking, but he just laughed and said it had to be two,” Fitzner added.

Returning to his seat to grab the other beer, Fitzner buckled up, drank it, and, thankfully, didn’t die. Luckily, though, he ended up with the autograph he wanted.

The guy is a man of the people.

“Manoah actually walked over to me while he was signing it and said ‘Man, did you chug two?’ and then clapped for me after I said yes,” he said.

Originally from Fort McMurray, Alberta, Fitzner has since moved to Pleasanton, California, but has remained a big Jays fan. And, well, it might not surprise you that he decided to celebrate his autographs with a few more beers.

“Obviously I wasn’t going to stop there, so it made for an expensive couple of nights,” Fitzner said. “2000% worth it, though.”