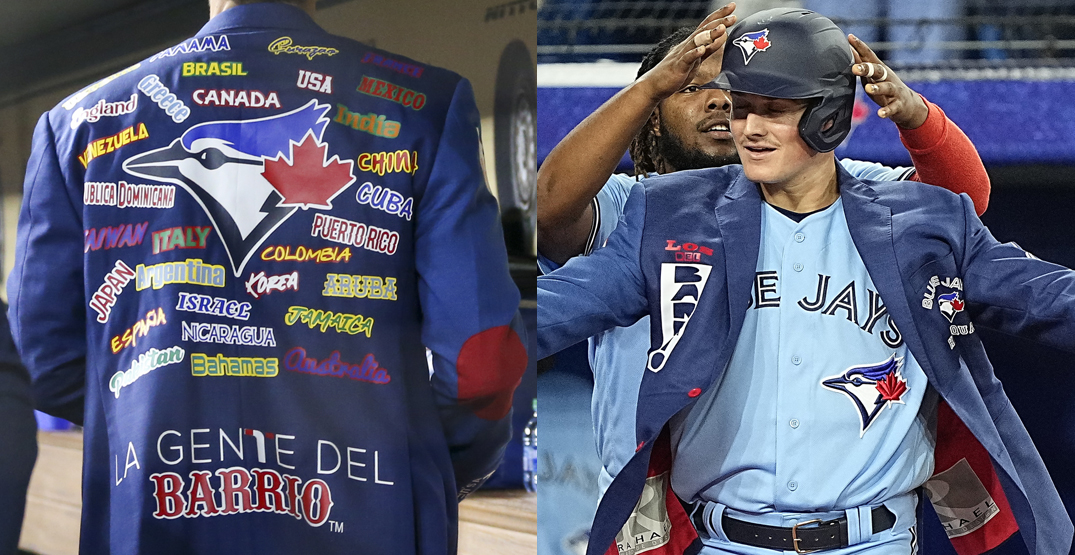 Last year, the Toronto Blue Jays started a fashion trend. Rarely will a professional baseball team turn heads, but the team did exactly that by unveiling their beloved “home run jacket.”

The movement took on a life if its own in 2021, and since the Jays led MLB with 262 home runs last year, the jacket got a workout. The celebration was so well received by the players and fans that the team opted to bring back the tradition for the 2022 campaign.

The team’s bilingual interpreter, Hector Lebron, brought the custom blazer to fruition. He enlisted one of his friends to design a custom jacket representing the countries of origin for the players, coaches, and staff.

After the home run itself, watching Blue Jays players strut through the dugout as if they were walking down the catwalk has been one of the most entertaining aspects of the home run jacket tradition.

Emblazoned across the back is the phrase “La Gente Del Barrio,” which means “people of the neighbourhood.” For the 2022 season, they added new countries to the back of the jacket: Ukraine, Pakistan, India, Peru, Israel, Greece, and Argentina.

Lebron told Daily Hive through email correspondence that the player that hits a home run is the most excited to adorn the jacket.

Although, you’d hardly know that, considering teammates like Vladimir Guerrero Jr. can barely wait to grab the jacket and stand at the top of the dugout to congratulate the home run hitter.

“It’s almost more fun to congratulate your teammate rather than put it on,” said former Blue Jay Robbie Ray in the video below.

Last season, Vladimir Guerrero Jr. was the very first Blue Jay to suit up in the blazer after a home run, clearing the Green Monster at Fenway Park on July 29, 2021.

On special occasions, even starting pitchers get to sport the blue jacket. Earlier this year, Jose Berrios adorned the garb after a stellar eight-inning performance against the Detroit Tigers.

Guerrero leads the team in home runs this year, but Lebron noted Santiago Espinal is the most proud to wear the jacket when he goes yard. Espinal only went deep twice last season, so his five home runs in 2022 have already surpassed his career high.

After leading all teams with 30 home runs in April, the Blue Jays lost their groove a bit through May, clubbing 21 home runs and sliding to 24th in team home runs. But they’ve bounced back in June, sitting third behind the Yankees and Braves this month in the long ball department.

The Blue Jays aren’t the only team in Major League Baseball to have some sort of home run accessory, but theirs is arguably the most fashionable. This year, the Baltimore Orioles added a home run chain to their repertoire, and the Los Angeles Angels have a home run cowboy hat.

Now in its second year, Toronto’s home run jacket is symbolic of the multicultural Blue Jays clubhouse, but also their fans. One piece of clothing has brought a team and fanbase together over the last year.

Lebron has been surprised and happy to see the public’s reaction to the blue jacket. “This whole thing is for the city, it is for the country,” Lebron said. “We are all the Barrio.”