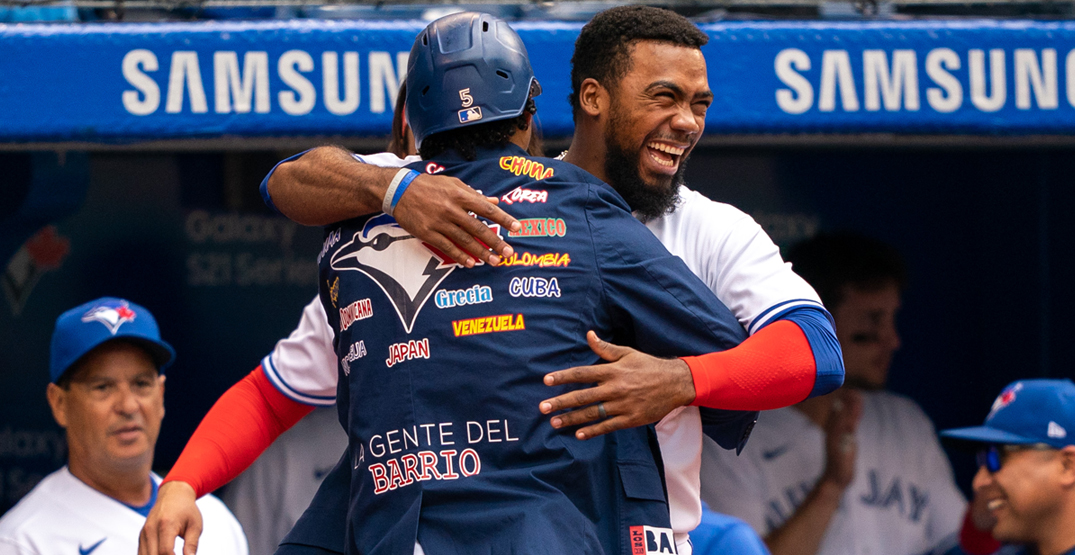 The Red Sox have the laundry cart. The Padres have the “Swagg chain.” The Phillies have their home run hat. Now the Blue Jays have their answer to the league’s ever-growing post-home run traditions and attire: the home run jacket.

It started on July 29 when Vladimir Guerrero Jr. hit a missile out of Fenway Park. When he returned to the dugout, his teammates presented him with an exclusive jacket reserved for players who blast a pitch over the fence.

We present to you…

The left sleeve is adorned with “The Blue Jacket,” and the right cuff says “it’s a Tito thing,” as an ode to the team’s bilingual player interpreter, Hector Lebron, whose nickname is “Tito.” Surely, it’s some sort of an inside joke between the players, coaches, and clubhouse staff.

The “Barrio” Jacket makes it’s season debut at Fenway. Hit a homer and you could be sporting this fashion forward garment.
The jacket has the names of all the countries represented in the #BlueJays clubhouse. pic.twitter.com/gTBGfi6h62

But on the back of the jacket (which is a JC Penny “Stafford” brand) says “La Gente Del Barrio,” which translates to “the people of the neighbourhood.” The countries listed are an ode to the Blue Jays players, coaches and support staff.

The jacket was the brainchild of Lebron as a means to represent the multicultural backgrounds of the team and its fan base. Whether it’s Korea for Hyun-Jin Ryu, Mexico for Alejandro Kirk, the Dominican Republic for Vladimir Guerrero Jr., Canada for Jordan Romano, or Puerto Rico for manager Charlie Montoyo.

The saying “La Gente Del Barrio” was meant as a saying to represent everyone on the team, from the players to the coaches. The Blue Jays are known as “Canada’s team,” but this jacket symbolizes the entire world.

The players wear the jacket proudly, like a teenager wearing a suit for the very first time. If Vladdy isn’t the one hitting the home runs, he’s the gatekeeper outside the dugout ready to fit the player coming off the field.

Instead of golf’s green jacket at the Masters tournament at Augusta, the Blue Jays have the “blue jacket” in their home wardrobe. These players aren’t going home with a massive prize pool, but they get to strut through the dugout with this custom blazer.

It all started with these batting practice T-shirts emblazoned with the same phrase. It became so popular among Blue Jays players and they immediately bought into the “one neighbourhood” concept that Lebron took the t-shirt design upgraded it to a blazer form.

Lebron enlisted one of his old friends to print the jacket with the home countries of all the Blue Jays members, along with the sayings along the sleeves and cuffs.

WORK 👏 IT 👏 SEMI 👏@JOLaMaKina had a front row seat for this one 🤣 pic.twitter.com/BS7ocLUdm6

The Blue Jays just wrapped their first official “homestand” in Toronto since September 2019, and the jacket got quite the workout over the first 11 games at Rogers Centre. The Blue Jays lead the majors in home runs, slugging percentage and OPS.

And yes, the home run jacket has even caught on with younger fans, as this youngster has their very own version of the accessory.

Who knows, maybe this is the first step towards turning this into a Blue Jays giveaway?