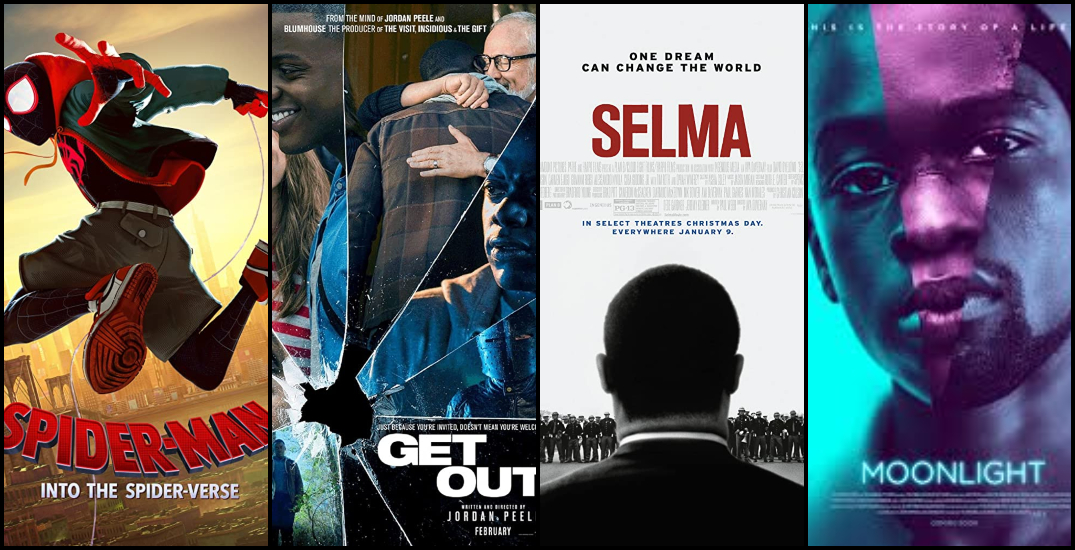 At a time when anti-racism marches and protests have taken centre stage all over the world, this weekend might be a timely opportunity to empower and inform yourself on the importance and strength of movies by Black filmmakers.

From superhero flicks to dramas and biopics, here are 10 movies that were created by Black directors and cast.

The story of Dr. Martin Luther King, Jr.’s 1965 plight to secure equal voting rights by heading an epic march from Selma to Montgomery, Selma is a powerful and emotional reminder of the strength of the Black community.

You don’t have to be a superhero or Spider-Man fan to appreciate the story of a multiverse of Spider-Men/Woman in this heartfelt, trippy, and beautiful animation. It seems wild that a movie bouncing between dimensions, absurdity, action, and humour can blend well together, but this collection of web slingers does not disappoint.

From acclaimed director Spike Lee, BlacKkKlansman is based on the true story of Ron Stallworth, an African-American detective who infiltrated the Colorado Springs K.K.K. in the late 1970s with the help of a Jewish surrogate and eventually became the cult’s leader. It’s a wild, funny, and empowering ride.

Jordan Peele’s directorial debut tackles racism head-on but with a classic horror twist. Peele approaches racism in a visceral and downright scary way as Chris and his new girlfriend, Rose, head upstate to meet her aggressively white parents and things start to creepily spiral out of control.

Ava DuVernay, the director of Selma, takes audiences on an in-depth look at the prison system in the US in a jaw-dropping revelation of the nation’s history of racial inequality.

12 Years a Slave tells the astounding true story of Solomon Northup, an African-American who was snatched off the streets of Washington in 1841 and sold into slavery. It’s impossible for anyone watching to not connect to this deeply emotional and compelling story.

You don’t have to be a Marvel Studios fan to appreciate director Ryan Coogler’s masterful approach to the superhero genre, which is unlike any other. Black Panther features outstanding acting, gorgeous cinematography, a cool soundtrack, great action sequences, and surprising depth and emotion.

With Malcolm X, Spike Lee delivers a tough biopic-drama that recreates actual events of the American minister’s life based on FBI reports and witness accounts. It’s a powerful, lasting, and complex look at the life of the human rights activist.

Moonlight is presented in three stages in the life of the main character, Juan, from his youth, adolescence, and early adult life. The film is an unforgettable story about power, grit, and grace.

The powerful film adaptation of the popular August Wilson play of the same name, Fences features heartfelt performances by Denzel Washington and Viola Davis and follows a working-class African-American father trying to raise his family in the 1950s.