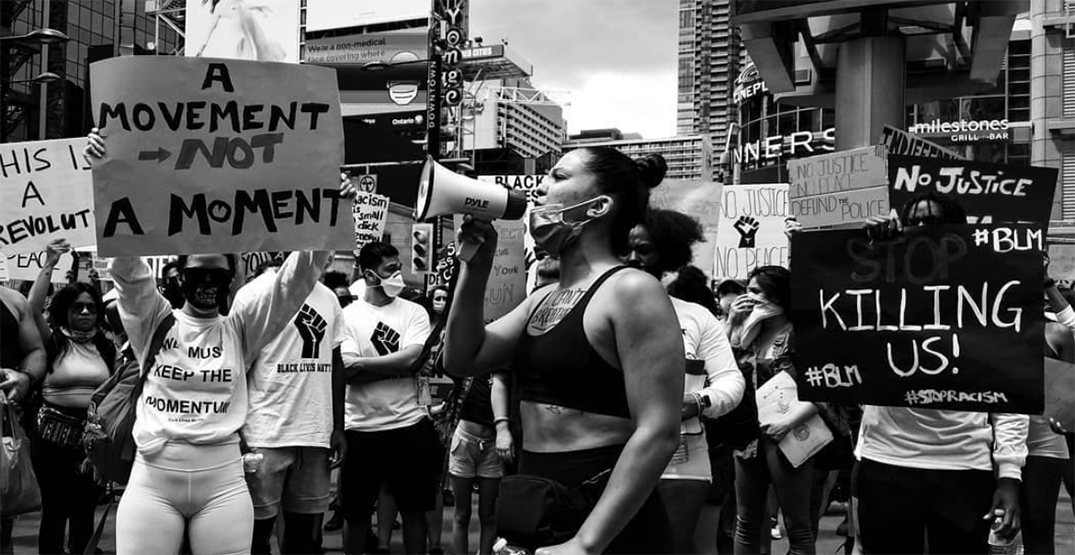 Protesters made their way to downtown Toronto Saturday for a demonstration calling for an end to police brutality and anti-Black racism.

This protest follows last weekend’s march calling for justice in the deaths of Regis Korchinski-Paquet and George Floyd.

Hundreds of protesters at Queen’s Park started the day by taking a knee and raising their fists in solidarity to honour Black lives lost.

From there, they walked to Nathan Phillips Square calling out “no justice, no peace.” and “I can’t breathe,” referencing Floyd’s final words as a Minneapolis police officer kneeled on his neck.

There was some tension at the square as one demonstrator reportedly showed up in Blackface. Some protesters demanded “what are you doing here?” and asked the man wearing the offensive face paint to leave. At the end of the clip, a police officer is seen approaching the man.

Videos from local TV news outlets show police escorting the man out of the crowd.

Toronto’s Black Lives Matter chapter did not organize this weekend’s demonstrations, but said in a Facebook post it believes “in individuals and community’s autonomy to choose their own way to protest.”

This weekend’s planned actions, Black Lives Matter – Toronto (BLMTO) has NO involvement in the organizing of any of this…