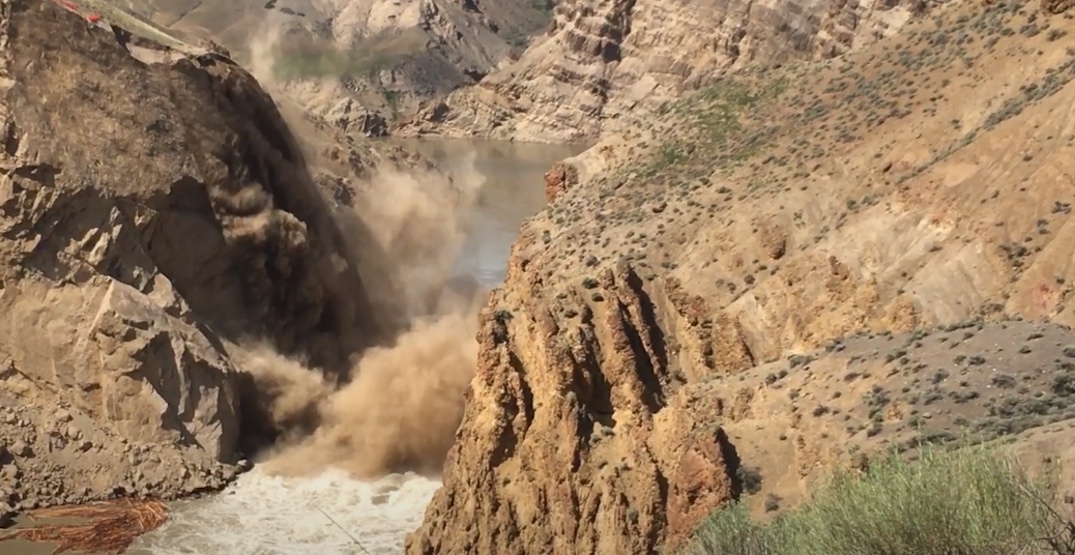 Dynamite explosion to clear obstacles at the site of the Big Bar landslide into the Fraser River. (Government of BC)

The federal government announced this week it has contracted engineering giant Kiewit to construct a new permanent fishway on the Fraser River at the site of the Big Bar landslide, located about 64 km north of Lillooet.

The contract value is worth CAD$176.3 million, which includes design work. Construction is expected to begin this winter for an operational start in time for the Fraser River’s Pacific wild salmon migration in 2022.

A significant landslide occurred at the remote canyon location on June 23, 2019. About 110,000 cubic metres of rocky debris — enough to fill about 45 Olympic-sized swimming pools — fell into the river.

It created a five-metre-tall waterfall barrier that prevented migrating salmon from moving beyond the landslide to reach their spawning grounds deeper in the BC interior. There have been major impacts to the reproductive cycle of several key Upper Fraser salmon populations.

Kiewit was previously contracted to perform the first mitigation efforts beginning late 2019 and into 2020 at a cost of $70 million. They successfully built access to the work site, cleared significant amounts of debris, blasted boulders, and widened the river channel and constructed an initial “nature-like” fishway, which improved migration conditions through the area.

Additionally, alternative fish passage systems supported fish movement until the mid-summer reduction in water flows allowed salmon to migrate past the barrier without assistance. This contract went to Whooshh Innovations at a cost of USD$4.45 million, which provided a concrete fish ladder, a fish wheel, and truck and transport.

However, in July 2020, it was determined that a permanent fishway is the only long-term solution that can provide a reliable, all-season fish passage at Big Bar.

“As we continue our work to address the Big Bar landslide, we are looking for sustainable, long-term solutions to improve Pacific salmon migration in the Fraser River,” said Terry Beech, the parliamentary secretary to the Minister of Fisheries and Oceans, in a statement.

“The permanent fishway is the scientific answer to ensure safe fish passage at Big Bar to support our at-risk fish populations. We look forward to seeing the fishway up and running, and together, our governments will continue to do everything we can to protect and restore our wild Pacific salmon stocks.”