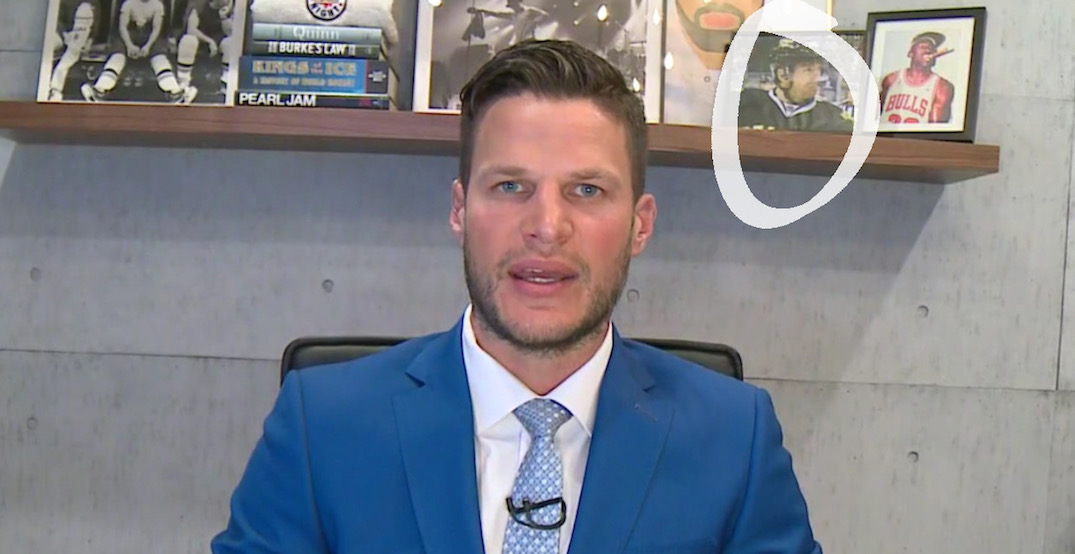 After showing off a framed picture of Ryan Kesler in the nude, this week it was Vernon Fiddler’s turn. Bieksa showcased a framed photo of Fiddler on the shelf behind, from a famous incident that happened between the two former NHL players.

During a game in Dallas on February 26, 2012, Fiddler did a hilarious impression of Bieksa while the Canucks defenceman was sitting on the bench. It got a laugh from Bieksa, but it got an all-out giggle fit from head coach Alain Vigneault.

In 2012, Vernon Fiddler (@TheFiddler38) did an incredible impression of Kevin Bieksa (@kbieksa3)…

And coach Alain Vigneault was LOVING it. 🤣 pic.twitter.com/43g0SvQRB2

“He’s not the first guy to do it, unfortunately,” Bieksa told After Hours back in 2012. “There’s a couple of other Muppets around the league that have been trying to do it. I’m sure he’s not the last guy after this.”

“He’s an ugly guy to start out with, and then he’s doing that face on top of that,” Bieksa added. “He’s not doing himself any favours.”

“Obviously, it hurt the caveman’s feelings a little,” Fiddler said before the next Canucks-Stars game in March of 2012. “Their bench got quite a kick out of it, which says what kind of guy he is.”

And of course, fans loved it.

DOES KEVIN BIEKSA HAVE A PICTURE OF THE VERNON FIDDLER/ALAIN VIGNEAULT INCIDENT BEHIND HIM— pic.twitter.com/yFy5fFxD1C

Bieksa with the framed Vern Fiddler mocking him pic behind him this week.

The man is an A+ troll. STOP BEING SO LIKEABLE KEVIN, FUCK

Bieksa has the Vern Fiddler picture where he was mocking Juice. That's the one that gave AV the giggle fit.

Bieksa with a Vern Fiddler impersonation picture of him on the #HNIC broadcast tonight. Dying 😂

I love that Bieksa has a picture of Fiddler behind him 🤣🤣🤣

Don’t normally watch @hockeynight when the @Canucks aren’t on, only tune in to see @kbieksa3 now and again. Is this Vernon Fiddler, doing the Bieksa impression? Best AV moment? 😂 Hilarious. pic.twitter.com/46Uhjg0OHo