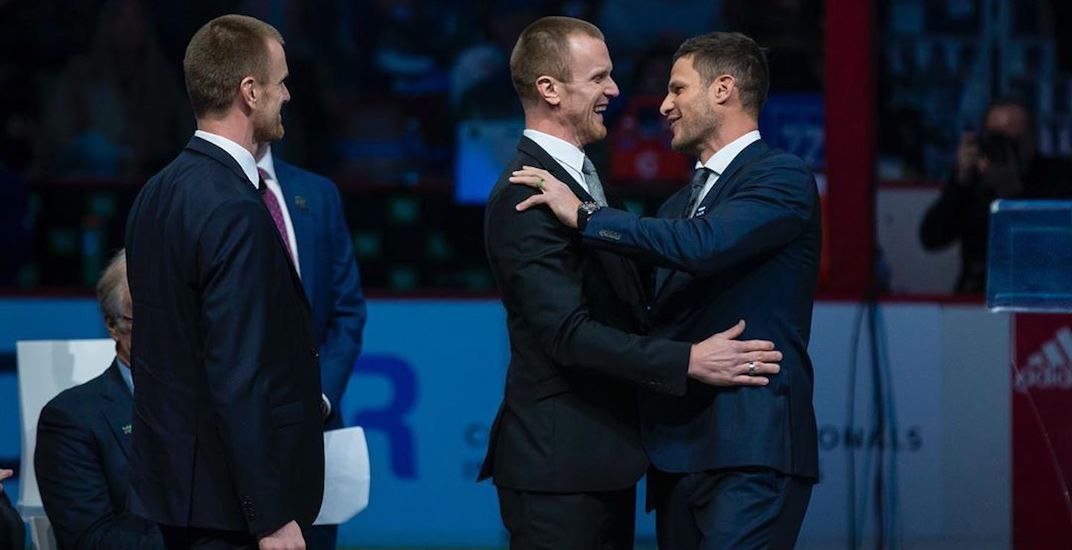 There was no shortage of highlights during Henrik and Daniel Sedin’s historic jersey retirement celebration at Rogers Arena on Wednesday night.

Two players have never had their jerseys raised to the rafters at the same time before, but it was only natural for the two greatest players in Canucks history.

An All-Star list of guests attended the 45-minute on-ice ceremony. In some cases, that meant people putting egos aside.

Mike Gillis attended and was seated next to other former Canucks general managers Dave Nonis and Brian Burke. I’m not sure anyone thought we would ever see that happen.

Trevor Linden returned for the first time since leaving the organization, despite the fact that he seemingly has a strained relationship with both ownership and the current management group. He received a huge ovation.

Markus Naslund and Mattias Ohlund flew in from Sweden. Roberto Luongo flew in from Florida. Alex Burrows was allowed to leave the AHL’s Laval Rocket, where he is currently an assistant coach, to attend.

Jannik Hansen and Kevin Bieksa came back for this.

Ryan Kesler was there, despite being concerned about the fan reaction. Instead, fans showed him the love.

Nobody other than the Sedins could have put this group together.

Roberto Luongo back in a #Canucks jersey 👀 . 📷: @canucks #dailyhiveoffside

The most entertaining portion of the evening was when Bieksa grabbed the microphone. Without any notes, Bieksa spoke for over seven minutes in a speech that closely resembled a stand-up comedy routine at times.

“When they first asked me to come out here and say a few words on behalf of Danny and Hank, my first thought was to roast them,” Bieksa said. “I mean, I don’t know why I had that thought in my head, but it could have something to do with the fact that Kes and Burr texted me to roast them.”

And roast them, he did — mentioning “cheesecake parties” the Sedins would host for fellow Swedes on the road, Henrik showing up out of shape at his first training camp, and Daniel having a “legitimate candy addiction.”

Bieksa didn’t just roast the twins; he left some quips for a few of his other former teammates as well.

Need a host for your next event? @kbieksa3 is the man for the job!! 👏🔥 pic.twitter.com/qPb0xHJqe5

Bieksa mixed comedy with sincerity, ending his speech by giving Canucks Nation all the feels.

“In 20 years, there will still be a Sedin flavour to this organization, and a Sedin culture in that dressing room, and that’s something that will transcend any on-ice statistics that they had,” he said.

“On behalf of all their former teammates, trainers, coaches, management, and the people of Vancouver, we’re grateful for who you are. You’re the two best players and people to ever wear the Canucks jersey. We love you guys and there’s no one more deserving of this honour.”