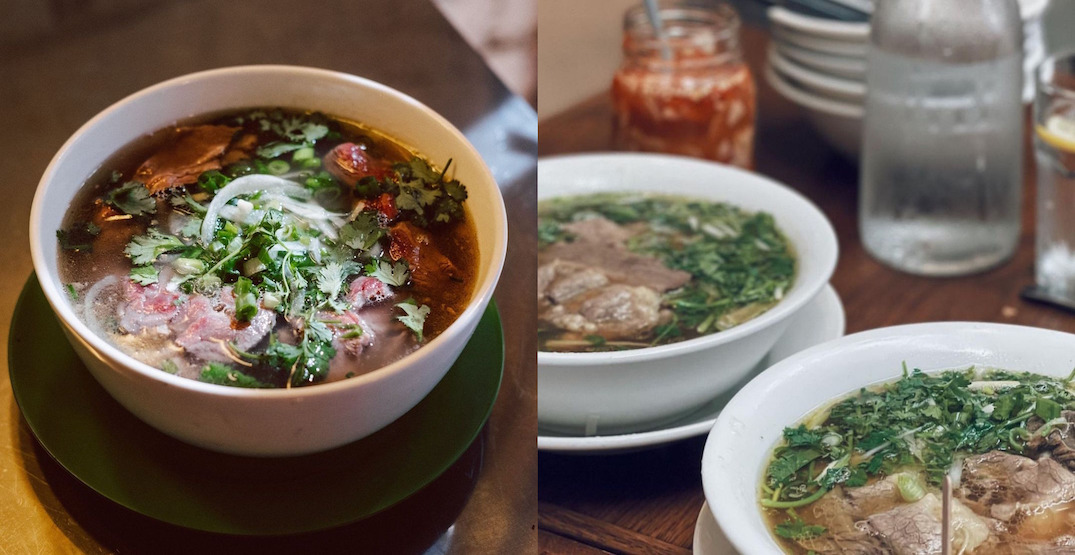 One of the national dishes of Vietnam, and one of our favourite dishes ever, a good bowl of pho is a true cure-all, in our opinion.

Whether it’s a cold day, a breakup, a pesky flu, or just a bout of hunger you’re dealing with, there’s little as satisfying as a big, steaming bowl of the stuff.

The soup dish has many variations, depending on the region of Vietnam, but in general, pho is a dish consisting of broth, rice noodles, herbs, and meat (but there are also plenty of vegan versions, too!).

Northern-style pho uses winder noodles, has a clearer broth, has chicken or minced rare beef, and uses much more green onion and black pepper, while Southern-style pho has a slightly sweeter broth, a more meat-forward approach, and is served with lime, hoisin sauce, and sliced Bird’s Eye chilis.

No matter the kind of pho you’re after, Vancouver has a fantastic variety of Vietnamese cuisine, meaning there’s so much good pho in this city that it can be hard to decide where to go.

Here are our top choices for the best pho in Vancouver.

Known for its fish cake noodle bowls, in particular, Bun Cha Ca Hoang Yen recently relocated to a bigger space to accommodate all the hungry diners in Vancouver looking to get a taste of its fantastic food. You’ll want to try the pho here, as well as several other of the restaurant’s menu items.

This popular Main Street restaurant is a no-brainer if you’re searching for delicious pho. Here, the dish comes in varieties like sliced beef sirloin, brisket and meatballs, boneless free-range chicken and quail egg, and organic tofu, daikon, and carrot, to name a few.

Do Chay has two Vancouver locations, both of which offer the restaurant’s signature vegan pho. This plant-based version is made with avocado, yuba, yo choy, broccoli, oyster mushroom, and rice noodles in a flavourful, vegan pho broth – a definite departure from more traditional pho dishes, but one that still wows us.

This popular Davie and Main Street haunt dishes up steaming bowls of pho both day and night. While vegetarians can enjoy meat-free noodle soup options, it is the fragrant, meat-laden (think: tender slices of beef) pho bowls that are the real stars of the show here. You can also opt to get your pho “sate style” here, with a spicy, peanut sauce added to the broth.

This casual, family-style restaurant is known for combining traditional French cooking with Vietnamese cuisine. Therefore, it should come as no surprise that the restaurant dishes up pho bo, with several delicious renditions. Here the full-bodied broth is best savoured with finely sliced rare strip loin. For maximum flavour, add some bone marrow or a perfectly cooked poached egg into the already hearty mix.

With the flavours of Vietnam and the coziness of a Parisian cafe, this authentic place on Commercial Drive hits the spot. The menu has eight different styles of pho, including vegan and lemongrass chicken flavours. Finish the night with Vietnamese egg coffee, a drinkable dessert that will perk you right up.

This counter-serve marketplace eatery has two locations in Vancouver, which means you have double the chance to enjoy its Vietnamese veggie pho. Made with star anise, cinnamon, cardamom broth, organic tofu, daikon chunks, beancurd, lotus root, mushrooms, herbs, flat rice noodles, and bean sprouts, this offering is gluten-free as well.

Named after and inspired by Saigon’s Mrs. Nguyen Thi Than, this Commercial Drive spot specializes in Vietnamese street food. This spot’s pho bo (beef pho) features a super flavourful broth that has been simmered for 24 hours, as well as a vegan version with King Oyster mushrooms.

This gem specializes in Northern Vietnamese food, which has a few distinctions from Southern Vietnamese – in terms of pho, Northern style uses wider rice noodles, has a clearer broth, uses chicken or minced rare beef, and uses much more green onion and black pepper. Cafe Dang Anh is a truly solid choice for Vietnamese in the city, let alone the neighbourhood.