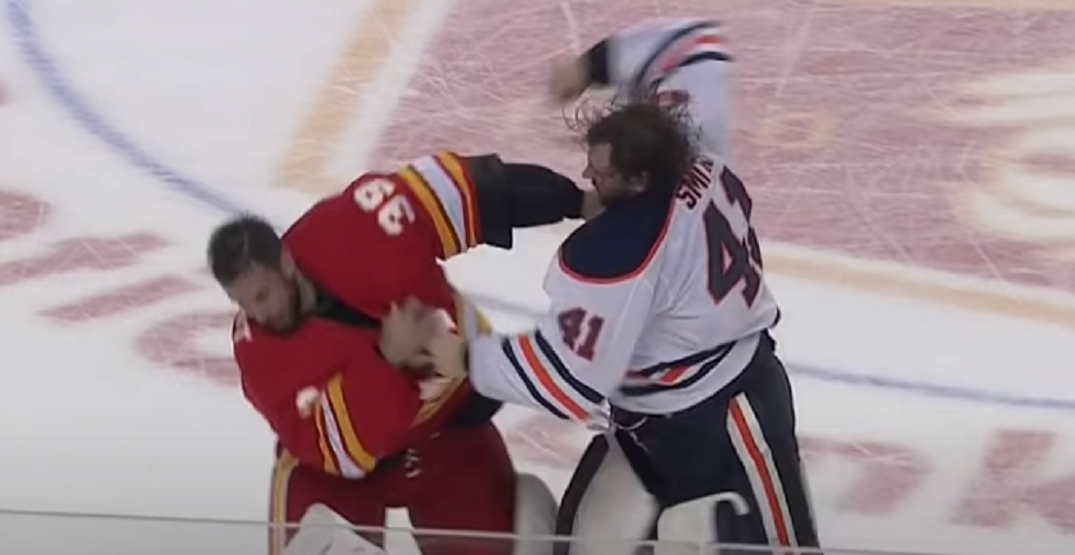 The Battle of Alberta between the Edmonton Oilers and Calgary Flames is known for hits, goals, and, well, of course, the fights.

Oilers and Flames players have gotten into fights 264 times over the course of the rivalry, per HockeyFights.com.

With the two teams set to face off against each other in the second round of the Stanley Cup playoffs, it should be a safe bet there are more fisticuffs on the horizon.

In no particular order, here are 11 of the best scraps in the Battle of Alberta since 2016-17:

February 1, 2020, might be the wildest night in the Battle of Alberta history. Jujhar Khaira and Buddy Robinson faced off in the first period with a fight, but it hardly foreshadowed what was to come.

Late in the second period of that game, the two teams converged for an all-out war on the ice. But the main event of the night was the goalie fight between Smith and Talbot, which caused both goalies to be ejected.

In the same brouhaha, Tkachuk and Ethan Bear also faced off against each other for the third fight of the evening.

This was the last fight between the two teams, taking place a little over a year ago now. Remarkably, neither team fought each other in their four matchups this past season.

Nothing like a fight right off the faceoff. Kassian and Glass seemed ready to go right off the draw, leaving Kassian heading to the locker room with a bloodied face.

What was that about fights right off the faceoff? It wasn’t Kassian, this time, but Lucic going at it with Glass.

This mini-rivalry started way back in the first game of the 2016-17 season and continued when the teams met again the following January.

This fight was the follow-up to “Turtlegate,” where Tkachuk was accused of ducking Kassian in a fight three weeks prior after landing a big hit on the Oilers forward. Kassian ended up picking up a two-game suspension for going after an unwilling Tkachuk.

There’s something a little different when two star players fight each other. It wasn’t the longest fight in the world, and both players looked a little out of place. It was the only NHL fight of Monahan’s career so far, while Nugent-Hopkins has had three.

It was a quick fight but one with plenty of uppercuts. Nurse and Travis Hamonic got into a first-period scrap before eventually being broken up along the benches.