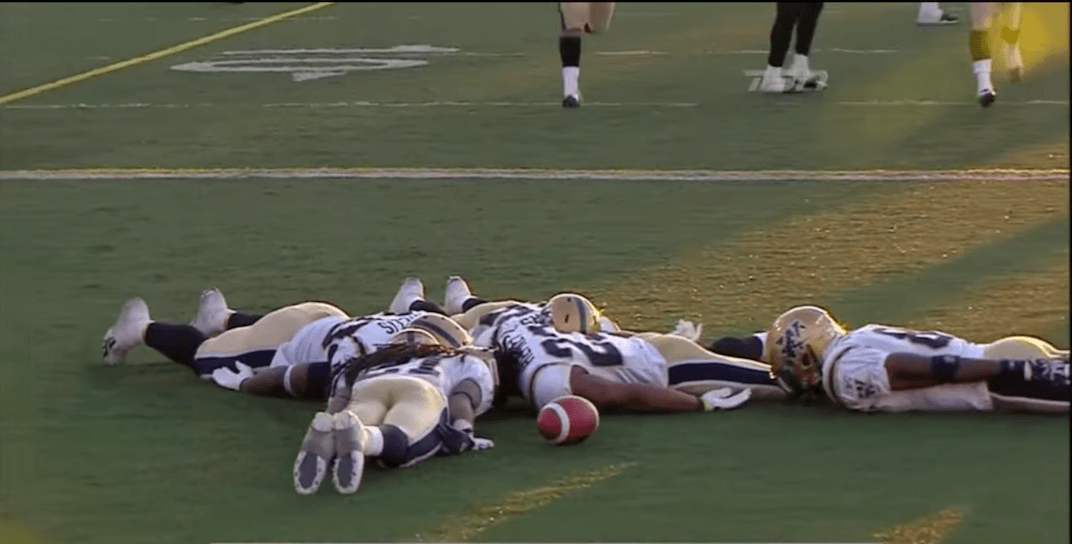 With that fresh in our minds, let’s revisit some of the best touchdown cellys in league history.

After smothering a pass from Kevin Glenn, Edwards led a hilarious game of Duck, Duck, Goose in the end zone.

As the stacks mount, so do the celebrations.

The Ottawa Redblacks did the limbo following a pivotal touchdown in the Eastern Conference semis.

A video of the dance went viral on social media; hitting just shy of two million views on Twitter.

Duke Williams gave Booster Juice the best advertising they could have hoped for.

Williams and two of his teammates crawled under the Booster Juice board by the end zone.

The celly was apparently too much as Edmonton was assessed a 15-yard penalty, drawing the ire of many fans on social media.

I DON'T WANT TO LIVE IN A CANADA WHERE A CELLY LIKE THIS IS A 15-YARD PENALTY #CFL pic.twitter.com/IZNzCEfP7x

Backlash in the aftermath of the penalty is what likely drove the CFL’s decision on loosening its celebration policy.

In 2011, the Australian planking craze moved overseas to Canada.

A phenomenon where people lie face down in odd situations and locations, planking became the celly of choice for the Blue Bombers after they returned an interception for a touchdown.

2017 looks to have been the year of the touchdown celebration.

Kicking the creative moves off was Kevin Glenn, who started a Conga line for the Saskatchewan Roughriders.

I’m honestly not sure what was more impressive with Dave Stela’s touchdown. The catch was a clean grab, but the footwork during his hacky sack celebration was impeccable.

At first, nobody knew exactly what to call it.

The team’s Twitter account responded by dubbing the Bombers’ dance “The Hippo” and it’s gone strong ever since. Andrew Harris’ dance currently stands as CFL fans’ favourite celebration through Week 10.

Everybody’s favourite video game Fortnite has crept its way into football as well.

That celly because @fortnite is life, right @justcallmekj? . #Repost @tsn_official ・・・ Do your dance, @justcallmekj! Bo Levi Mitchell found Kamar Jorden early for the first @calstampeders touchdown of the game. ••• #CFLGameDay

Before Fortnite was ever a thing, it was Mortal Kombat that was the video game of choice for celebration inspirations.

The CFL made the celly even better by adding special effects during post-editing.

Here’s hoping the rest of this season provides even greater post-touchdown festivities with the loosening of the rules.