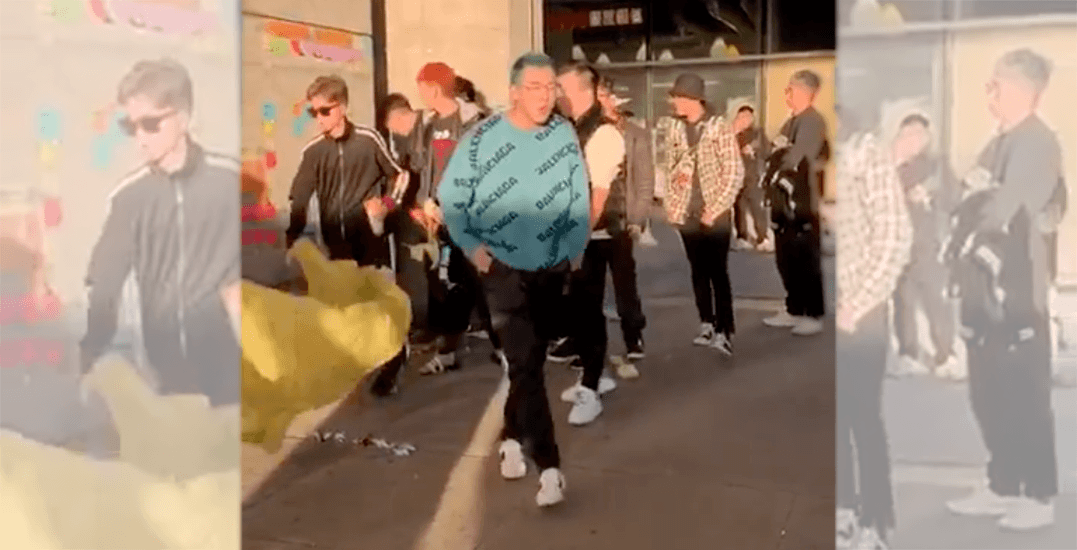 A screenshot of pro-Beijing supporters at Aberdeen Center (Submitted)

A makeshift “Lennon Wall” set up outside SkyTrain’s Aberdeen Station in Richmond by Hong Kong supporters was quickly torn down by Chinese nationalists, according to accounts on social media.

Video footage submitted to Daily Hive shows several individuals ripping off signs and sticky notes left on the wall until nearly nothing was left.

A separate clip also shows a brief exchange between what appears to be a Hong Kong supporter and several of the pro-Bejing followers.

The incident took place on Tuesday in the late afternoon. According to Kevin Haung, who captured the incident on Twitter, the wall was torn down within an hour of being built.

This is what the #LennonWall at Aberdeen Station looked like before its destruction. It was constructed within an hour but didn’t last long with nationalists already waiting to swoop in to wreck it.

Guess what: the pro-HK people stayed and cleaned it all up after. Class act. pic.twitter.com/lebcTkx1Yq

Ugh. Look at how bare it is after the attack.

Reiterating here: Pro-HK Lennon Wall builders stayed and cleaned up the wall and area this degree. Which side has the decency of respect and appreciation of public spaces? pic.twitter.com/zx4M8dO2Y8

Some of the phrases said by the pro-Chinese Community Party (CCP) individuals allegedly include “It’s our freedom (to be here and destroy the wall),” “It’s you that started insulting us,” and “Doesn’t Canada have problems too?”

“It’s our freedom (to be here and destroy the wall).”
“China killed people? Hong Kong killed people. Hasn’t Canada killed people too?”
“It’s you that started insulting us.”
“Doesnt Canada doesn’t have problems too?”
“Who hit who? No one hit anyone” pic.twitter.com/wx0t9jcgtB

Huang writes on Twitter that the event was organized “by high school students who wanted to do something to show support for the #HongKongProtests” and that they had gone to the station after classes ended.

The original concept of a Lennon Wall, which is found the Czech Republic, was filled with John Lennon-inspired graffiti and lyrics of Beatles songs in the 1980s. Makeshift Lennon Walls have since been made around the world, typically with designs supporting other local or global causes.

Huang also writes that several of the wall organizers and event-goers reported “being followed by Pro-CCP people as they [left] the event” on Telegram, an encrypted messaging app.

(not in video but important situational context) Lennon Wall Organizers and event-goers reported on the telegram group that they are being followed by Pro-CCP people as they leave the event. They don’t feel safe.

On the same day that the Lennon Wall was torn down, a Hong Kong protest took place at the University of British Columbia (UBC). According to Huang, pro-CCP nationalists also formed a counter-protest.

Organizers reported that pro-Beijing supporters allegedly threw water on the signs of Hong Kong supporters and were “physically aggressive.”

There was a #HongKongProtests rally at the University of British Columbia (UBC) main campus. It was met with counter protestors.

Organizers shared with me how Pro-CCP nationalists threw water on their signs and were physically aggressive. pic.twitter.com/Ft2tlNaqd1

And… a video was just shared with me about the nationalists throwing water and then rubbing out the chalk writing and signs with their feet.

UBC – take note, this is on campus.

@ UBC – the nationalists chanting “take off [your] masks”. I heard this at the Vancouver City-Hall back in August as well.

No, masks are to keep self and family safe. CCP is known to make political dissidents ‘disappear’ + doxxing. pic.twitter.com/ysaisVYiiC

Wow. They are shouting at someone who speaks mandarin for supporting the pro-Hong Kong side. Basically calling them a traitor as mandarin is the national (read: colonial) language of Mainland China.

From source: the pro-HK mandarin speaker was trying to ease the situation. pic.twitter.com/VO6XnxOfcB

The protests first began over a controversial extradition bill but has since expanded to entail a number of other demands, including an independent inquiry on police brutality in earlier incidents, the resignation of chief executive Carrie Lam, and a full official withdrawal of the bill from the legislative process.

The events also highlight pent up frustrations with Hong Kong’s social issues, including housing unaffordability, as well as fears over Hong Kong’s autonomy and protected freedoms.

Within the Lower Mainland, other protests have taken place at SkyTrain stations in Downtown Vancouver, Aberdeen Centre in Richmond, and the Vancouver Art Gallery’s North Plaza.

Daily Hive has reached out to the RCMP in regards to both events.