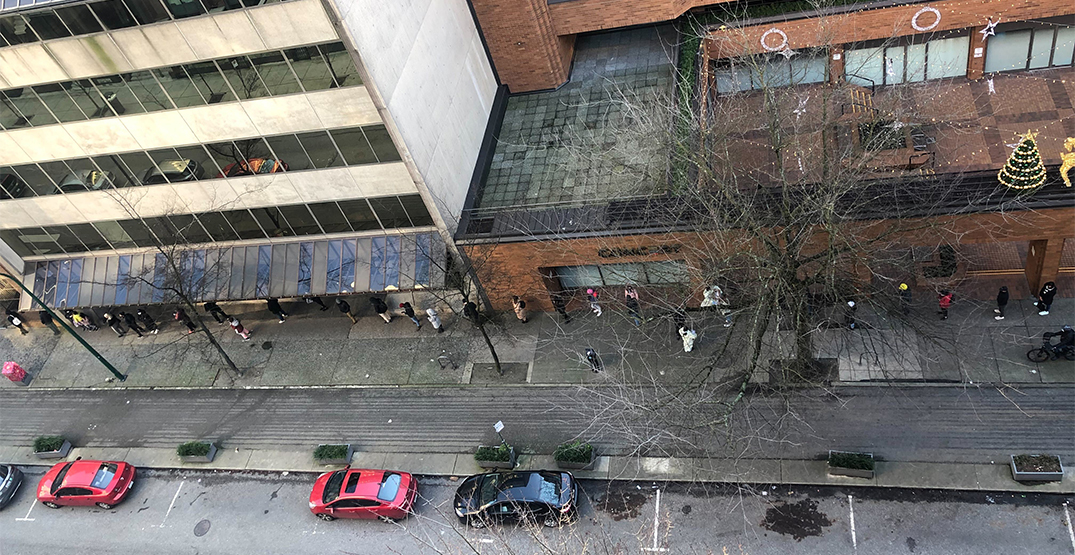 BC’s provincial government is urging people who don’t have COVID-19 symptoms to stay home so that staff at PCR testing sites can focus on people who are actively experiencing symptoms.

Long lines have formed at Metro Vancouver test collection centres this week as COVID-19 cases in the province surge, and people without access to rapid tests want to make sure they’re healthy before visiting family.

“Those who do not have symptoms are strongly advised not to access testing services to allow frontline providers to prioritize care to those who are most likely to be infected,” a spokesperson for the Ministry of Health told Daily Hive. “Before visiting a test site, we advise all residents to complete BC’s COVID-19 Self-Assessment Tool to ensure they require a test.”

The line for a test at Three Bridges Test Collection Site in downtown Vancouver snaked around the block Monday morning, and Vancouver Coastal Health had no estimated wait time posted on its website.

Over at St. Vincent Test Collection Site near Queen Elizabeth Park, a Reddit user captured a video of an eight-block long lineup of cars for the drive-through tests. VCH pegged that station’s wait time at three and a half hours on Monday.

“If you are seeking a COVID-19 test in Richmond today, please note: the YVR ​COVID-19 testing site is temporarily closed. We are re-directing the public to St. Vincent’s testing site (Heather/33rd Ave, Vancouver) to better manage demand for the next hour,” the health authority said.

If you are seeking a COVID-19 test in Richmond today, please note: the YVR ​COVID-19 testing site is temporarily closed. We are re-directing the public to St. Vincent’s testing site (Heather/33rd Ave, Vancouver) to better manage demand for the next hour. Stay tuned for more info.

Update: the YVR COVID-19 testing site has now reopened to the public and we appreciate your patience. We strongly advise the public to monitor wait times at testing sites by visiting https://t.co/4Er13HjtJO

“This uptick in traffic, for those with and without appointments, unfortunately, has resulted in lineups at some of our busier locations for a period of time,” senior communications consultant Curtis Harling said.

Although Fraser Health doesn’t post lineup times on its website, Harling said no one with an appointment is being turned away, and people who don’t want to wait have the option of picking up a saline gargle test to do at home and dropping it off later.

The long lines for PCR testing sites come as the BC government receives criticism for not better distributing rapid test kits.

BC has received approximately 3.4 million rapid test kits from the federal government but has only used about 330,000 of them. Provincial Health Officer Dr. Bonnie Henry said that was partly because the units BC received are not optimized for use at home.

She said BC would be receiving more rapid test kits in January, and they would be distributed then.

Meanwhile, Ontario is handing out free rapid tests at liquor stores and subway stations, and Saskatchewan, Nova Scotia, and New Brunswick have been handing out the free kits for some time.