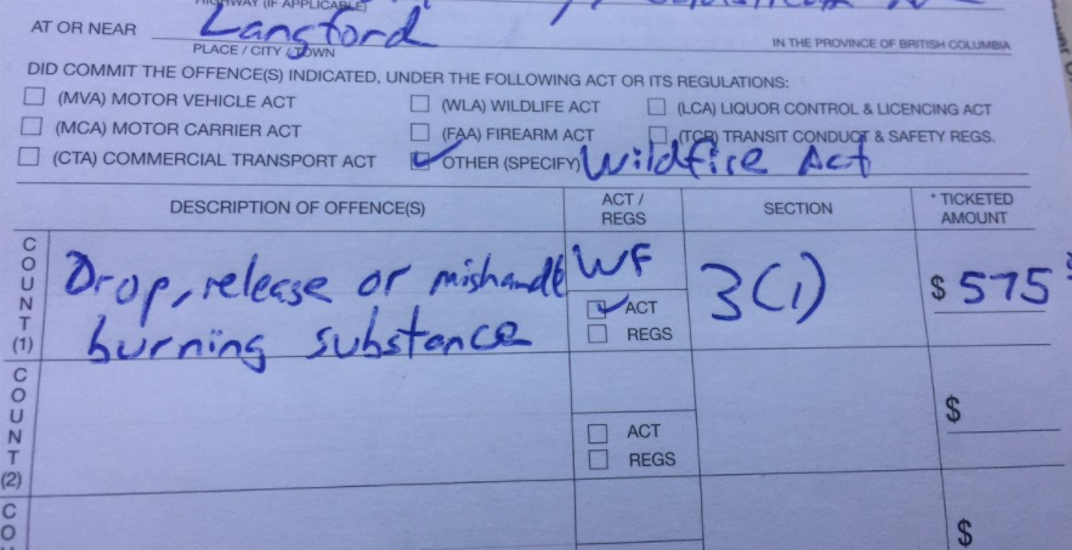 It’s no secret that this summer has been a crazy one in BC when it comes to wildfires; some might even call it insane.

Numerous fires are still burning across the province, and the wildfire danger is still very real and very high.

But it still seems that some people apparently don’t think the situation is that bad, or that the rules apply to them.

Case in point: A driver in Langford on Vancouver Island, who tossed a cigarette butt out a car window.

The driver was then ticketed by Westshore RCMP with the standard $575 fine, as tossing a lit cigarette from a car is illegal and in direct contravention of the BC Wildfire Act.

And even though the driver’s actions could have had dire consequences, possibly resulting in extensive destruction and damage, it was the ticket that the driver said was insane.

Cig butt out the window is simply wrong and ILLEGAL. Driver thought the ticket issued was “insane”… #yyj #bcwildfires pic.twitter.com/w5lK4EfWjy

Sure, the price may seem steep in the moment, but when you consider the millions and millions of dollars that have been spent fighting forest fires this summer, along with the thousands of homes that have been evacuated as well, it begs the question: Who’s really the insane one here?