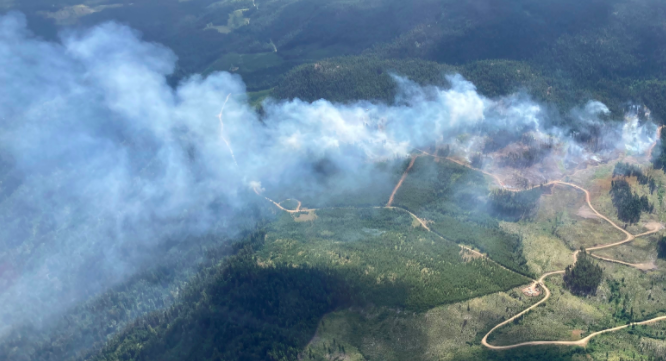 The BC Day long weekend was a busy one for wildfire crews, as at least 99 wildfires were sparked across the province since Friday morning.

And according to Fire Information Officer Karley Desrosiers, lightning is the suspected cause of the majority of the blazes.

“It’s tough to give a completely accurate number, because it does change even throughout the day, but the latest update I have is that since Friday there have been 99 fires,” Desrosiers told Daily Hive on Tuesday.

However, out of these fires, she noted that “only 38 of them are currently burning in the province, and only four of them are bigger than 3. 8 hectares.”

And while Desrosiers said officials “can’t fully confirm” the source of the fires, the suspected cause of most fires that  occurred over the weekend is lightning.

“We saw lightning roll through the Okanagan and Coastal regions in Friday, and then more isolated the southeast region on Saturday, with a little bit of lightning activity up in the Prince George fire centre, over the weekend as well,” she said.

As for the response from fire crews, Desrosiers said there are “active resources on all of the incidents… and resources that we need to manage the fires that are currently burning.”

Still, this doesn’t mean people should be letting their guard down when it comes to wildfire risk, especially with more people enjoying outdoor activities like camping.

“I think the biggest thing, especially with the heat and the trends that we’ve seen, is just campfire safety and ensuring that people are aware of any bans or prohibitions that are in place in their region,” she said.