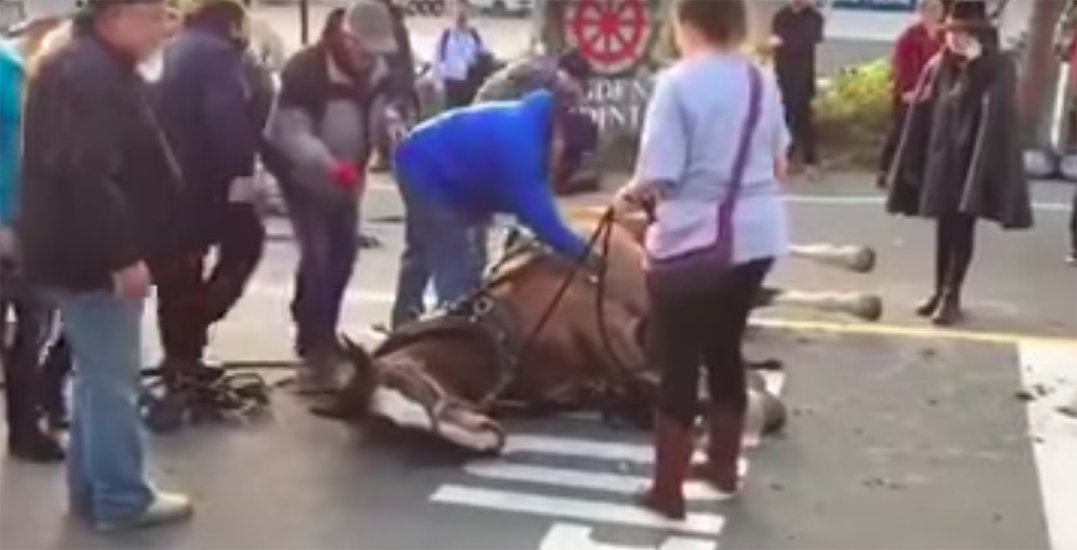 The BC SPCA recently penned a letter to the City of Victoria, asking for improved care and working conditions for the horses that help operate tours on Victoria’s streets.

The letter comes after an incident that occurred on Friday, May 4, 2018, at Ogden Point. Two trolley horses were involved in a traffic accident, which caused them to fall and be in “significant distress” for an extended period of time.

According to the letter written by the SPCA, the video also revealed that the horses’ “handlers were not adequately trained in emergency procedures, nor in control of the situation.”

The accident took place when a bus pulled up directly behind a trolley being drawn by two horses. As the trolley was preparing to move, it rolled back and hit the front of the bus, causing the harness to slacken, knocking over the horses.

When the handlers attempted to urge the horses back on their feet, they left the harnesses on, which put the horses at further risk of injury. According to the BC SPCA in their letter, “the handlers did not have an appropriate strategy in place to safely resolve the incident.”

Although the horses were able to get up after a lengthy struggle, the situation still posed a serious threat to public safety, the animals’ welfare, and created a serious delay in street traffic.

In turn, the BC SPCA is pushing for several recommendations that would improve the well-being of the horses who work Victoria’s carriage tours.

The first recommendation is to prohibit the tours on city streets and move them to local parks. Amy Morris, Public Policy and Outreach Manager, explains that an area like Beaconhill park would be a much safer location where horse-drawn carriage tours could still operate. The move would reduce danger to both public safety, traffic, and animal welfare.

The second recommendation from the BC SPCA is to limit the vehicle tours to one horse per cart. Although the move would “likely prohibit the use of trolleys in Victoria,” carriages would still be a viable option and decrease the risk of injury to horses should another incident occur.

The final recommendation includes better training for companies who operate carriage tours and their handlers, as well as preparing an emergency kit the be stored on each vehicle.

Outside of initial comments at the time of the accident, the company operating the horse-drawn carriage has not made a recent statement regarding the incident or the letter penned by the BC SPCA.