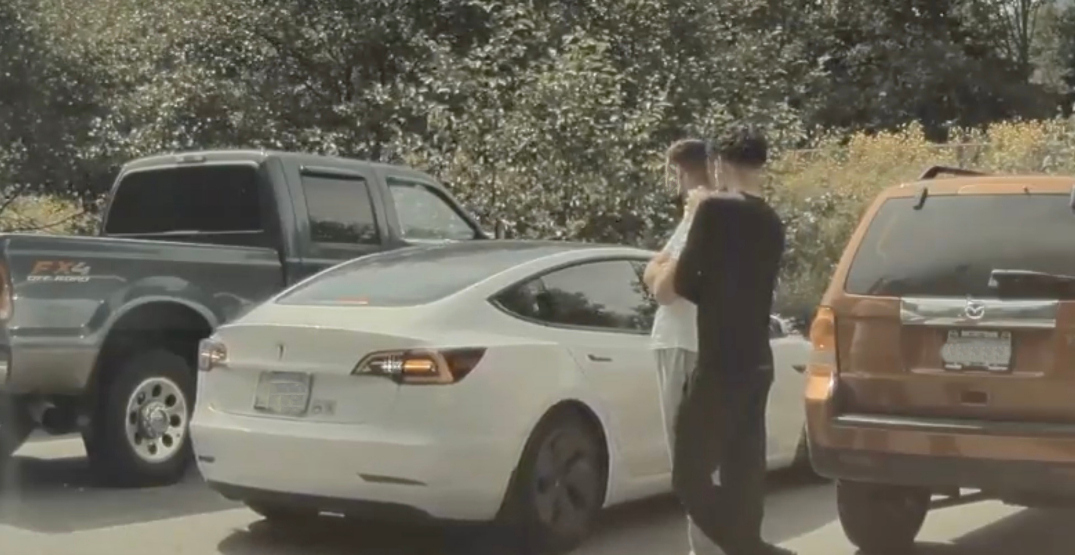 Shannon Falls is a beautiful place this time of year, but for one couple it was a parking lot nightmare.

The BC attraction is located along the Sea to Sky Highway just south of Squamish, and it was bustling on Canada Day. Thanks to all the traffic, finding parking was no easy task.

We’re calling the driver Neil for his safety, and he reached out to Daily Hive to share his tale.

Neil and his wife chose Shannon Falls as their long weekend day trip destination. One of the reasons was due to the relatively low activity it would entail for Neil’s wife who is six months pregnant. The couple hails from South Surrey.

Neil tells Daily Hive that the main lot was extremely busy, and cars were just circling around the lot waiting for an opening. Finally, Neil found his. Before he could pull into the newly vacated space however, two men jumped out of a car that was two cars ahead of Neil and the space itself, and stood in it to ‘claim it.’

He proceeded to drive into the space the two individuals were standing in, and honked to merely indicate to them that they had to move.

Neil claims that the two individuals were “ready to aggressively engage with anyone who challenged,” and in turn he told them they couldn’t do this.

“We aren’t aggressive people and our experience handling conflicts isn’t that extensive.”

At this point, his wife exclaimed “there’s a pregnant lady in the car,” thinking that it would morally end the conflict according to Neil. Instead, a third person joined the two who were already in the parking spot to help defend it.

Neil had a little bit of support in the altercation, as someone in the car behind him engaged the ‘goons’ as he calls them and told them to look for another spot.

After all of the drama, a fourth person who was in the same party as the three individuals defending the space said that he had found another space. Neil thinks they may have wanted to de-escalate the situation.

Once they finally got to explore Shannon Falls, they only stayed for about 15 minutes because they were worried about the guys involved in the parking lot nightmare damaging or scratching the car.

“In hindsight, I should have kept my windows rolled up and not engaged in a conversation with them at all. Also, in hindsight my wife shouldn’t have said anything about her being pregnant because we were already in the right,” Neil adds.

What do you think? Should someone be allowed to stand in a parking space to save it?

Let us know in the comments.