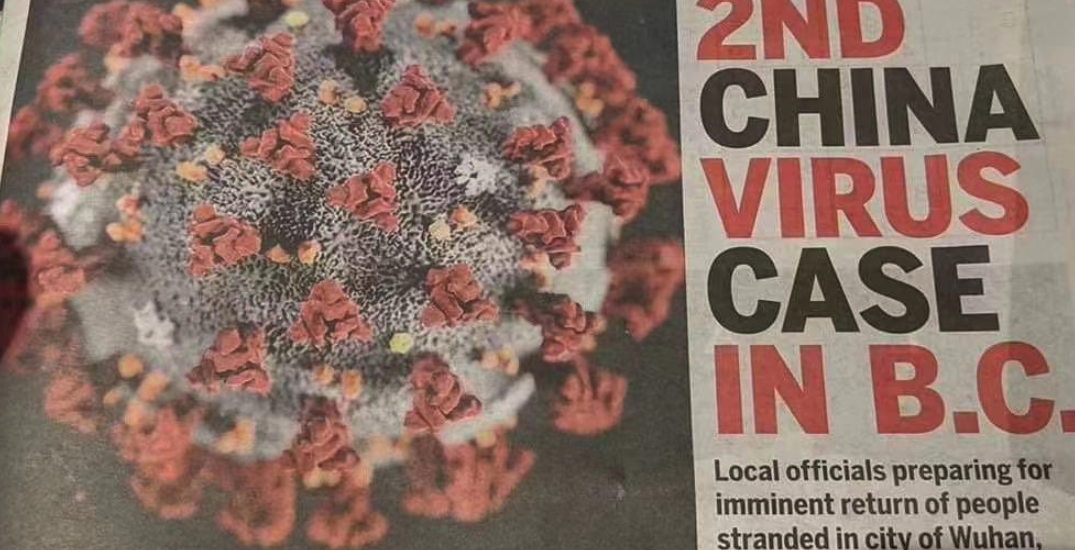 The Province newspaper is receiving backlash for being “racist” and “discriminatory” in its recent coverage of the coronavirus.

In an online statement, Madame Tong Xiaoling, China’s Consul General in Vancouver, BC, said the headline was “extremely unprofessional” and reflected “the paper’s arrogance, prejudice and discrimination.”

“The World Health Organization defines this virus as ‘the novel coronavirus,’ which is a scientific terminology that has been adopted internationally,” she wrote.

“This is inconsistent with the Canadian core values as The Province has always professed, as well as journalistic ethics. We demand that The Province immediately apologize for its mistake and stop using similar language.”

The headline is also the centre of criticism on social media, with many expressing their dismay on Twitter.

@theprovince who thought this headline was a good idea? Who even APPROVED this? Shamefully ignorant. pic.twitter.com/VBfv5pUr1S

#Xenophobia & #racism all stem from lack of education. If media outlets hired people that were well-educated in all aspects of life, this would not be on the front page of @theprovince. It’s appalling. Someone needs to be held accountable for this. @CTVVancouver @GlobalBC https://t.co/1DPPTbfs7P

To @theprovince: Your irresponsible words put people in danger and incite hate against the Asian diaspora. Do not encourage racism and xenophobia. Think about how your words can harm people. Call it the novel coronavirus. https://t.co/YwLReEvX1n

.@theprovince referred to Coronavirus as “China Virus” on their front page. It was offensive, fear mongering, racist. I am very disappointed in this publication. A petition has started – please sign it if you think they should retract and apologize. https://t.co/EWkiC1iocq

The use of yellow peril narratives only serves to drive xenophobia, racism. How about headlines of how the chief medical officer and ministers stating that the racialization of #coronavirus is unacceptable and harmful. pic.twitter.com/CKFkpbRNyT

Anne Kang, MLA for Burnaby Deer-Lake, called the headline “very troublesome,” and BC Liberal leader Andrew Wilkinson said the headline was “beyond disappointing.”

“We don’t stereotype and fear monger in the face of a health scare. We need to work together to fight the virus, not each other,” added Wilkinson.

This is beyond disappointing to see this sort of thing happening in British Columbia. We don’t stereotype and fear monger in the face of a health scare. We need to work together to fight the virus, not each other. Together we are so much stronger. pic.twitter.com/PptMYgeGyW

Last week, Dr. Theresa Tam, Canada’s Chief Public Health Officer, said she was “concerned” around the growing reports of racism and discrimination directed towards people of Chinese and Asian descent in regards to coronavirus.

“It is understandable that our fears increase during times like this. However, we need to remember that cohesion in our collective efforts is important,” said Tam in a series of tweets.

“Racism, discrimination, and stigmatizing language are unacceptable and very hurtful. These actions create a divide of UsVsThem. Canada is a country built on the deep-rooted values of respect, diversity and inclusion.”

The BC Centre of Disease Control (BCCDC) has also issued a number of tweets hoping to clear up “several misconceptions being spread about coronavirus on social media.”

Editor’s note: A previous version of this article erroneously stated The Province’s web edition was amended. In fact, the web copy of the article has always used “Coronavirus” in its title.