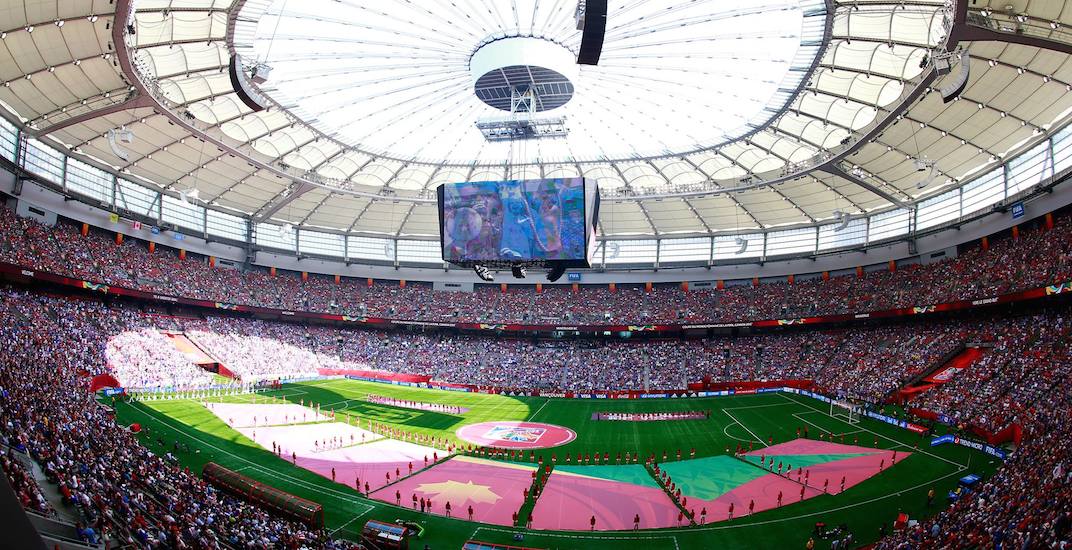 BC Place Stadium in Vancouver during the 2015 FIFA Women's World Cup. (FIFA)

You can almost hear the laughter from government officials in Edmonton, Toronto, and Montreal when news broke that British Columbia shot itself in the foot with landing a possible chance to be part of a continental bid to host the world’s largest sporting event.

These cities, and Vancouver, are vying for two coveted host city spots that Canada will be provided if the United Bid Committee’s 2026 FIFA World Cup bid is successful.

But Vancouver’s participation in the joint bid is out of contention after a surprising last minute decision from the BC NDP government to reject the bid committee’s terms and requirements at this extremely early stage of a possible plan to host the World Cup.

A statement released this afternoon by Lisa Beare, BC Minister of Tourism, Arts and Culture, carried a highly adversarial tone that essentially kills Vancouver’s bid.

“Throughout this process, we have been in regular contact with the bid committee and other levels of government to support this bid, while protecting taxpayers,” said Beare. “Through these conversations and our submissions to the bid committee, we have made numerous attempts to clarify the risks and obligations faced by British Columbians.”

“So far, the bid committee has rejected our requests to clarify how much British Columbians could be expected to contribute. And they have declined to negotiate with the province regarding the concerns we raised. Should the bid committee reconsider, our door remains open to bringing some of the 2026 World Cup games to Vancouver.”

Shortly after this statement was issued, the United Bid Committee announced Vancouver would no longer be a part of its bid package to FIFA.

Premier John Horgan also told reporters on Tuesday that the provincial government takes issue with the possible terms for the future organizing committee to use BC Place Stadium, which is owned by provincial crown corporation Pavco.

“I have to make sure taxpayers aren’t on the hook for unknown costs at the whim of FIFA.”

As far as we know right now, the three other Canadian cities and provinces that are seeking a position in the bid have not declined the terms, and they certainly have not created a gripe to the extent that it would have them out of the running.

And the stadiums being considered for their bids are all publicly owned, just like BC Place.

These other Canadian jurisdictions are following through, so why does BC – under the BC NDP government – think it’s any different?

This provided the Vancouver Organizing Committee with the necessary flexibility to prepare the venue’s role to host the Olympic and Paralympic opening and closing ceremonies.

There were no issues once the stadium title returned to Pavco.

The following agreements at this stage of the United Bid Committee’s internal process were required:

The Stadium Agreement is where the Vancouver bid failed because of the provincial government’s refusal.

And is it really a blank cheque as Horgan claims?

The costs for Vancouver relate to the installation of a temporary grass field for the duration of the tournament, parking changes, stadium operations, training site operations, any relatively minor changes to the stadium required to accommodate world calibre athletes and the global media, a massive month-long FIFA Fan Fest near the stadium, and security.

According to a City of Edmonton report, Soccer Canada told Edmonton officials costs for selected Canadian host cities are estimated at just between $35 million and $55 million, but this is before any capital requirements to host the event.

Much of this cost is towards the FIFA Fan Fest – similar to the scale and scope of Live City Yaletown at David Lam Park during the 2010 Olympic Games – which is a requirement by FIFA to enhance the public experience beyond those who hold tickets to the matches.

It also allows fans to watch the matches, just as they did at the smaller scale 2015 FIFA Women’s World Cup Fan Fest at Larwill Park. Michelle Collens, the manager of sport hosting for the City of Vancouver, recently told City Council the FIFA Fan Fest is expected to cost $10 million to $20 million.

As with any major international sporting event, venues need to meet tournament requirements, and these associated costs to fulfill the requirements will be relatively minimal for Canadian host cities and especially Vancouver considering all the infrastructure that is already in place.

Ahead of the 2014 FIFA World Cup, Brazil spent $14 billion on its single-nation hosting duties, specifically on new and renovated stadiums, improved airports, and new transportation infrastructure. Another $2 billion, raised through corporate sponsorships, was spent by FIFA to cover the operating costs of the tournament.

In Vancouver, thanks largely to the legacies of the 2010 Olympic Winter Games, we already have a world-class international airport that has a rapidly growing global reach, a comprehensive public transit system with a train line to the airport, and a fairly robust and experienced hospitality industry.

We also spent $563 million on improvements to BC Place seven years ago to provide Vancouver and the province with the continued future capability to attract international events of high calibre. BC Place is considered as Canada’s flagship stadium by national sports organizations like Soccer Canada and Rugby Canada.

Moreover, Vancouver’s key role during the 2015 FIFA Women’s World Cup of hosting nine matches and the championship final and several qualifying matches for the 2018 FIFA World Cup were all part of the long-term plan to eventually partake in FIFA World Cup hosting duties.

At one point, Soccer Canada envisioned submitting its own standalone Canadian bid for 2026, without the participation of the United States and Mexico. But the three-nation bid was preferred as it centres on a sustainable concept of utilizing only existing venues, especially in the expanded 48 team format; no new venues and infrastructure will be built.

This entire fiasco amounts to the BC NDP putting the cart before the horse.

Horgan, Beare, finance minister Carole James, and other cabinet ministers that bear responsibility are treating the bid process as if hosting duties are a certainty – but it is far from guaranteed.

At the moment, Vancouver is not even part of the official bid to FIFA – it is bidding for a position in the United Bid Committee’s official bid submission.

Over the coming weeks, the bid committee plans to submit a final bid plan of 20 to 25 cities for FIFA to consider.

Then in June 2018, FIFA will decide on whether to award Morocco or the three-nation North American bid the hosting duties.

And only if the bid is successful will an organizing committee be formed, and the list of potential cities from the final bid plan – which Vancouver was competing to be on – will be narrowed down to 12 to 16 official host cities, which will be announced in 2021. Only at that stage would there be negotiations between the federal, provincial, and municipal government on sharing costs.

Hosting the FIFA World Cup would also align with one of the province’s key tourism generation strategies of pursuing the hosting duties of major international sports events.

For its role as a host of the 2015 FIFA Women’s World Cup, Vancouver saw an economic impact of $82.9 million and British Columbia as a whole experienced an uptick of $118.8 million.

For 2026, an economic analysis by the United Bid Committee shows that each host city could see between USD$160 million and USD$620 million in incremental economic activity from increased tourism and organizing committee spending. This equals to a net benefit of about USD$90 million to USD$480 million per city after accounting for potential public costs, and each Canadian host city will host up to five matches.

There are also intangible benefits for what a World Cup in Vancouver would do for youth sports for a generation.

By rejecting a prospect that makes rational sense and is so simple, what should be a complete no-brainer, this goes down as one of the dumbest things the provincial government has done in years, and it should put in question the government leadership’s ability to make sound judgments – especially its business acumen.