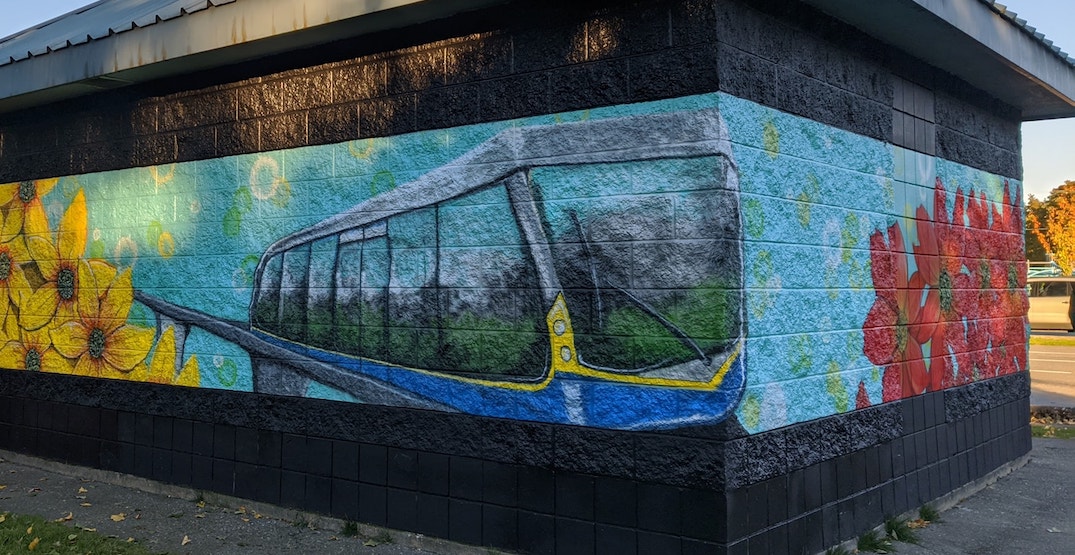 New public art mural depicting the future Surrey-Langley SkyTrain extension at Linwood Park in Langley City is an example of the community's support for the public transit project. (SkyTrain for Surrey)

The initial orange tsunami wave of the BC NDP in the South of Fraser ridings first began in the 2017 provincial election when they promised to remove tolls on the Port Mann Bridge and the Golden Ears Bridge.

The second wave that played out over this past weekend for the 2020 election carried the energy of the major infrastructural promises the party made for Surrey and Langley, including a specific promise on the extension of the Surrey-Langley SkyTrain project.

This was a key infrastructural promise of John Horgan’s BC NDP, with the party promising to prioritize the full 16-km-long extension with eight stations between King George Station and Langley Centre.

Although there was no timeline attached to the $3.1 billion project, and there is a $1.5 billion funding gap for the nine-km-long span with four stations between Fleetwood and Langley Centre, the party underlined its commitment to expedite the Expo Line extension by promising to transfer the project’s jurisdiction from TransLink to the BC Ministry of Transportation and Infrastructure.

The BC NDP provincial government indicated they will seek a federal partnership to fill the $1.5 billion that is still needed.

The BC Liberals made no such specific commitment to the Surrey-Langley SkyTrain project, instead only vaguely indicating that they will support “TransLink expansion to go where the population is growing in Metro Vancouver — including south of the Fraser, the Fraser Valley, and North Vancouver.” Instead, their key infrastructure promise was immediately reviving the original plans for the 10-lane bridge replacement and the Highway 99 corridor improvements.

For the SkyTrain extension, prior to the election, TransLink was aiming to have construction begin in 2022, whether it be a partial extension to Fleetwood or the full extension to Langley Centre, and reach completion in 2025. Procurement of a construction contractor would begin in early 2021.

Based on the latest projections, with mail-in ballots yet to be counted, the BC NDP have been able to hold onto all six Surrey ridings they won in 2017, and secure an additional seventh riding by turning Surrey-Cloverdale orange with the BC NDP’s Mike Starchuk ousting Marvin Hunt.

The BC NDP also upset the BC Liberals in the ridings of Langley and Langley East. BC Liberals incumbent Mary Polak lost her seat to Andrew Mercier of the BC NDP, while Margaret Kunst, replacing Rich Coleman, who retired at the end of his term, was defeated by the BC NDP’s Megan Dykeman.

All of this happened in the backdrop of the region’s eastward population shift, with left- and centrist-leaning young families leaving highly unaffordable urban areas and moving into suburban ridings where there is improved housing affordability.

Over the past decade, with the worsening housing affordability crisis, these historically right-leaning ridings have shifted more to the left with the new influx of these families. These same families are also more likely to support continued investments in public transit, measures that improve housing affordability, and the continued expansion of social programs and services.

The BC Liberals saw their first warning signs in 2017 when they lost their stronghold ridings in Surrey, but their 2020 platform did not shows signs that they learned or even acknowledged from their missteps three years earlier.

They not only repeated the same mistakes, but they seemingly doubled down on it.

“Well, we knew that this election would be more about Langley. When we were monitoring we weren’t sure what to expect in the Langley districts, but it became abundantly clear that the BC Liberals did not have a strong desire to focus on the Surrey-Langley SkyTrain issue, especially the need to build it in a single phase. We couldn’t find a strong commitment on their end, and then they announced highway project after highway project but didn’t talk transit, and that’s been reflected in the results in Langley City,” Daryl Dela Cruz with the SkyTrain for Surrey advocacy group told Daily Hive Urbanized.

“The NDP made a point to include the Surrey-Langley SkyTrain in their campaign. They saw the importance this has for Surrey and Langley residents because it’s still a challenge for us to get around or get to the rest of the region, and then we have all the growth and the density and the possible stadium in downtown Surrey. Clearly, this has rewarded them. Infrastructure projects tend to get to where they’ve been discussed for years and years and not built, and the residents of Langley went out there and said, ‘We want this built,’ and they really sent that message.”

The BC Liberals also failed to take into account the SkyTrain project, and the transition to a municipal police force were two key promises that swept Doug McCallum’s Safe Surrey Coalition into Surrey City Council in Fall 2017, obliterating Surrey First’s governing status in the City of Surrey.

Instead, adding to their misdirections, there was a promise by the BC Liberals to hold a municipal referendum on ditching the RCMP’s services for the new Surrey Police Department. The current consternation within the municipality’s political ranks over the transition may not be an accurate reflection of the public’s continued desire to have a municipal police force.

On the infrastructure front, both parties also made strong promises to deliver and fund Surrey’s new secondary hospital in Cloverdale, next to the Kwantlen Polytechnic University campus.