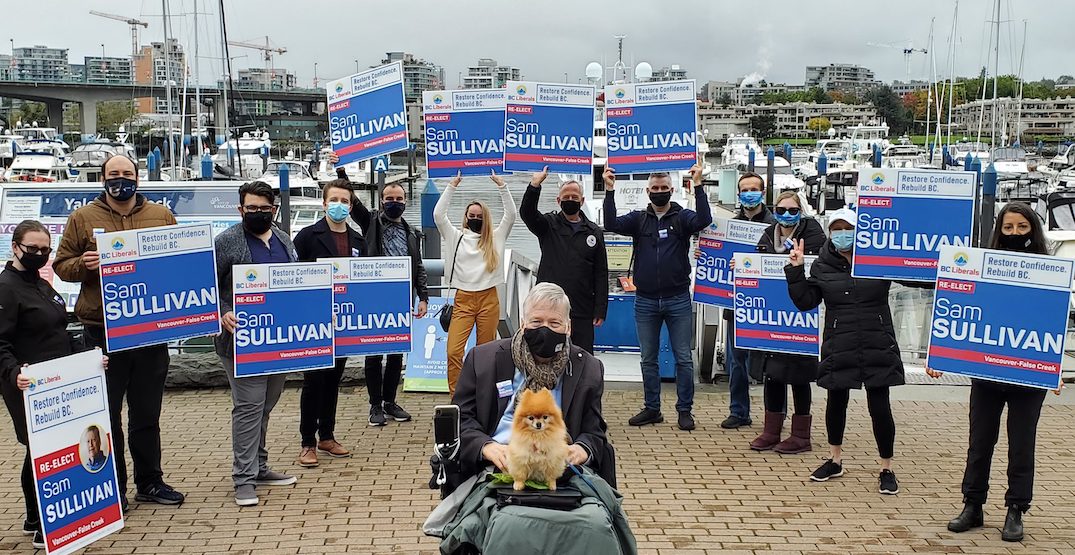 Sam Sullivan with the BC Liberals in Vancouver-False Creek. (Sam Sullivan/Facebook)

The BC Liberals have lost seats in at least nine ridings in Metro Vancouver following the provincial election, swept away mostly in an orange tsunami of the BC NDP, based on the latest projections as of Sunday morning.

Several ridings that have long been held by the BC Liberals turned orange, including several ridings in the South of Fraser, providing the BC NDP with new inroads from the 2017 election. The BC NDP did not shed any of the Surrey seats they gained three years ago.

The BC NDP’s Mike Starchuk ousted Marvin Hunt of the BC Liberals from Surrey-Cloverdale. Hunt’s party held this riding for most of the past two decades.

Andrew Mercier of the BC NDP has secured the riding of Langley, which was a riding for the BC Liberals since 1991. This was the seat of incumbent Mary Polak since 2005, who took on various high-profile cabinet minister posts during the BC Liberals’ time as the governing party.

In nearby Langley East, the BC Liberals were unable to hold their riding with Margaret Kunst as their candidate, replacing Rich Coleman, who retired at the end of his term. The seat is now held by Megan Dykeman of the BC NDP.

Kunst saw controversy with her campaign, after calling for a policy review on the installation of a LGBTQ rainbow crosswalk in her role as councillor for Langley Township.

Fin Donnelly with the BC NDP replaced Joan Isaacs of the BC Liberals in the riding of Coquitlam-Burke Mountain. This is a riding that has traditionally voted for the BC Liberals.

Another BC Liberals’ controversy may have been a factor for their defeat in North Vancouver-Seymour, a riding previously held by Jane Thornthwaite. This riding was a safe seat for the BC Liberals for decades, and it was Thornthwaite’s seat since 2009.

In the middle of the election campaign period, Thornthwaite and other party members of the BC Liberals saw heat for sexist and misogynistic comments about the BC NDP’s Bowinn Ma.

In Vancouver-False Creek, former Vancouver mayor Sam Sullivan with the BC Liberals lost the seat to the BC NDP’s Brenda Bailey. This was a riding held by the BC Liberals since 2009 when it was first contested, and by Sullivan since 2013.

The BC Liberals were also ousted from their longtime riding of Richmond-Steveston, with the BC NDP’s Kelly Greene taking over. John Yap retired from office after a decade, and Matt Pitcairn was unable to hold onto the seat for the BC Liberals.

Over in Richmond-Queensborough, Jas Johal with the BC Liberals was unable to hold onto the seat, with the BC NDP’s Aman Singh taking over. This was a rematch of the 2017 election.

The BC Liberals may also not be able to hold onto their Richmond South Centre seat. At the time of writing, with 76 of 77 polls reporting, the BC NDP’s Henry Yao is leading the BC Liberals’ Alexa Loo by just 124 votes. This riding will not be declared until the mail-in ballots have been counted in November. If Loo does not prevail, the BC Liberals would have lost 10 seats in Metro Vancouver.

Just one of the BC Liberals’ losses in Metro Vancouver cannot be blamed on the BC NDP, as they were ousted from West Vancouver-Sea to Sky by Jeremy Valeriote of the BC Greens. This was a historic win for the BC Greens, marking the first time they secured a seat outside of Vancouver Island.

For decades, West Vancouver-Sea to Sky was traditionally held by the BC Liberals, and Jordan Sturdy was its MLA since 2013.

The orange tsunami originating from Metro Vancouver was able to reach as far as the eastern Fraser Valley, which has historically been safe for the BC Liberals.

But the BC NDP’s Dan Coulter is ahead of BC Liberals incumbent John Martin by over 1,000 votes in Chilliwack, with 82 or 83 polls reporting.

And in Chilliwack-Kent, Laurie Throness, who resigned from the BC Liberals last week over a controversy and continued his campaign as an independent, is now trailing the BC NDP’s Kelli Paddon by only 195 votes. Throness saw backlash after comparing free contraception to eugenics.

The BC NDP under John Horgan have won a majority government, with the latest projections showing them at 55 seats — up from their count of 41 seats before the election. They needed 44 seats to form a majority.

The BC Liberals, however, went from 43 seats to a projected 29 seats, while the BC Greens are unchanged with three seats.

It is important to note that many votes have yet to be counted due to mail-in ballots. Vote-by-mail packages are collected centrally and cannot be counted for at least 13 days after the election, providing time for the ballots to be sent back to voters’ ridings for sorting and screening.

According to Elections BC, a total of 724,279 vote-by-mail packages were requested, with nearly 498,000 returned as of Friday night. There are nearly 3.5 million registered voters in British Columbia.

There is a possibility the election results will not be finalized until November 16.