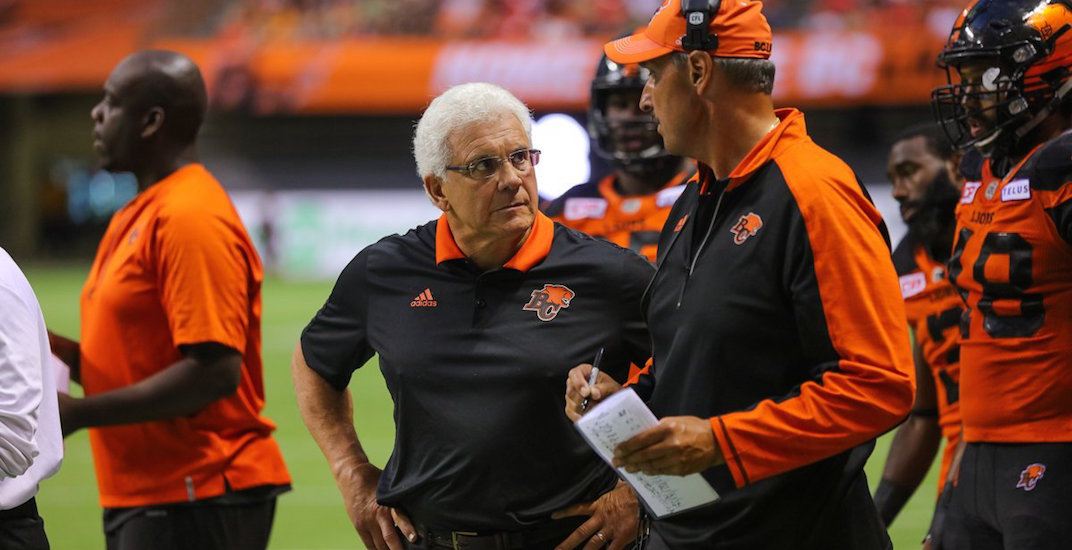 “It was a year of optimism that turned into a year of disappointment.”

Truer words have never been spoken, as Wally Buono conducted his season-ending media conference on Monday.

After finishing with the CFL’s second-best record in 2016, the Lions began 2017 with four wins in their first five games. Things were looking up.

Then it all came crashing down.

BC won just three of their next 13 games, finishing with a disappointing 7-11 record. They’ll be on the outside looking in for the first time in 21 years when the CFL playoffs begin next weekend.

That 21-year streak suggests an era of excellence, but the truth is problems with this franchise have been compounding for a number of years.

Struggling on the field

There have been periods of greatness during the 21-year playoff streak. BC won three of the franchise’s six Grey Cups during that period and under Buono they became the best-run franchise in the CFL.

But those days are long gone.

BC’s attendance has been on a steady decline in each of the last five years. The team’s relevance in the marketplace has taken a dip also.

As bad as that is, that’s not the number that should be most concerning to ownership.

The Lions attracted just 19,176 people to BC Place for their home playoff game against the Winnipeg Blue Bombers last year. This came after a terrific season with a good young team and an exciting young quarterback at the helm. Complete with Buono’s return to the sidelines, they should have been a marketable team. They were the city’s best kept secret.

📽 "A sale could occur this year, next year or the year after."

ICYMI: Owner David Braley admits the team must be sold in near future 🏈 🦁 pic.twitter.com/76djE0UGfe

The Lions are owned by David Braley, an owner who is getting up in age and admittedly wants to sell the team. Their president Dennis Skulsky wanted to retire a couple of years ago, but stayed on after Braley’s health took a turn. Buono retired from coaching, but returned before last season after his successor was unsuccessful.

On Monday, Buono said he wasn’t sure what the future holds regarding his involvement.

The trio of Braley, Skulsky, and Buono have done wonderful work for the Lions for a long time, but the team could use an injection of youth at this time.

"David (Braley) was very clear to me today that he was going to own the club for 2018."

Buono said that Braley intends to own the team in 2018, and that’s concerning.

How to win back fans

The Lions have lost fans and they’ll need to get creative to win them back.

Forget about TV blackouts, summer vacation plans, the weather, toll bridges, or traffic. Those are excuses that lame organizations point to.

I’m talking about ways to make games at BC Place more enjoyable for the consumer. Ways to make it about more than just the football game.

Progressive organizations realize they need a polished product, beyond the game played on the field to attract fans.

The fact that the team hasn’t artificially reduced their capacity in the lower bowl – as the Whitecaps have done successfully – is baffling. It took them far too long to stop selling tickets in the upper bowl also.

While BC Place can be a challenge, the Whitecaps have managed to get a good atmosphere in the stadium while setting their capacity at just over 22,000 people. The tarps make the stadium feel full. When 22,000 people show up for the Lions, the crowd looks sparse.

The Lions averaged over 28,000 people just three years ago, but the organization needs to understand that that sort of attendance won’t happen again for a while. It’s going to be a slow build.

In Ackles’ day, he brought history back to the organization. He also hired the right people and didn’t allow BC Place – then a much maligned dome stadium – to prevent the franchise from thriving.

He filled the stadium, and it wasn’t all with grey-haired people.

Getting young people on board

It’s no secret that the CFL has suffered in attracting young people to their product, and this marketplace is no exception.

The Lions need another Ackles, someone who can come to the table with new ideas and save the franchise.

People need an emotional attachment with the team again, and failing that, they need a reason to show up to BC Place – even when the on-field product is less than desired.

BC’s thrilling 45-42 win in Week 5 against the Blue Bombers – the most exciting game we’ve seen in this city in years – was a great way to win over fans, but you can’t bank on the team entertaining like that on a regular basis.

The team offered $5 tickets for children during the summer months. That’s a huge help for young families, and it’s a smart strategy.

Follow the lead of the Vancouver Canadians, who have made their product cool with young people by selling beer, hot dogs, and sunshine rather than the on-field product (despite the fact they’ve been very successful on the field as well). They’ve proven you don’t need to be ‘big league’ to thrive in Vancouver.

With evening temperatures cooling, the roof at @bcplace is CLOSED tonight.

Time to get loud and bring the ROAR factor! 🙌 🏈 #BCLions pic.twitter.com/bheZxboFQS

Unless it’s a torrential downpour, the roof at BC Place needs to stay open. They need to do whatever they can to make tickets affordable.

Appeal more to young people, not the base of aging fans you’ve already got. Skilfully, of course, because pissing off your current customers isn’t a good strategy either.

History is important, but it should be implemented in the right way.

Get the BC Lions logo – a classic brand, and perhaps the best logo in the city – back on the helmet. The wonderfully corny Roar You Lions Roar fight song needs to be a third/fourth quarter stretch song with lyrics on the scoreboard – not a song to celebrate touchdowns.

These are small examples, but they’re easy wins. Wins are something they need more of, on and off the field.