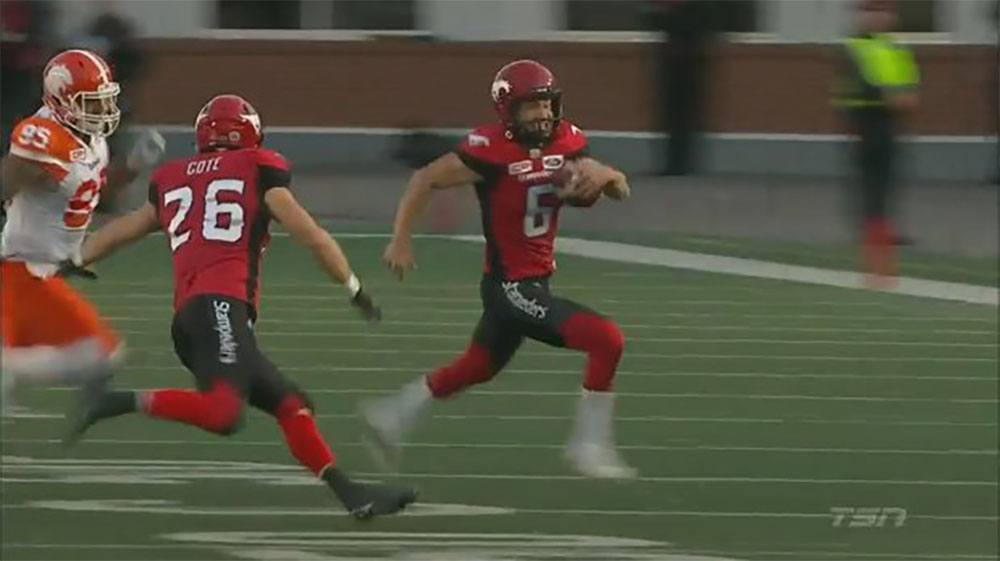 You know it’s not your day when a punter runs for 20+ yards on you.

But that’s exactly what happened to the BC Lions Saturday night in Calgary. Stampeders punter Rob Maver turned an almost blocked punt into a 24-yard dash. It was an accidental fake punt.

Instead of getting the ball back in a one-possession game, the accidental fake led to a Calgary field goal. The Stampeders would add a touchdown later in the quarter to seal it, beatting BC 27-13.

It was not a banner night for the Lions offence.

BC managed just 244 yards of total offence for the game. In contrast, Calgary quarterback Bo-Levi Mitchell had almost as many yards passing the ball.

Credit has to be given to the Calgary defence. Jonathan Jennings had no time to throw the ball every time he dropped back. He finished with just 167 yards passing and three interceptions, including a backbreaker with just 1:40 left in the game.

Thankfully kicker Ty Long decided to show up. He went 4-for-4 place kicking, including a 49-yard field goal.

This was the first time since August 19th of last year BC failed to score a touchdown in a game. Ironically, that one was also against the Stampeders.

Despite what the final score indicated, the Lions defence gave them a chance to win this.

They kept it a lot closer than it probably should have been.

It was just 13-4 at the end of the first half, and 14-7 at the start of the 4th. The game was there for the Lions to win, they just had to put some points on the board.

Soloman Elimimian was once again the catalyst for the Lions defence, recording 10 tackles — his third game this season with 10+.

"We did all the wrong things." – @JJ_Jennings10 pulls no punches when talking about tonight's loss vs Calgary. pic.twitter.com/iON7667wjC

Next up for the BC Lions is home date with 2-9 Hamilton Tiger-Cats on Friday.