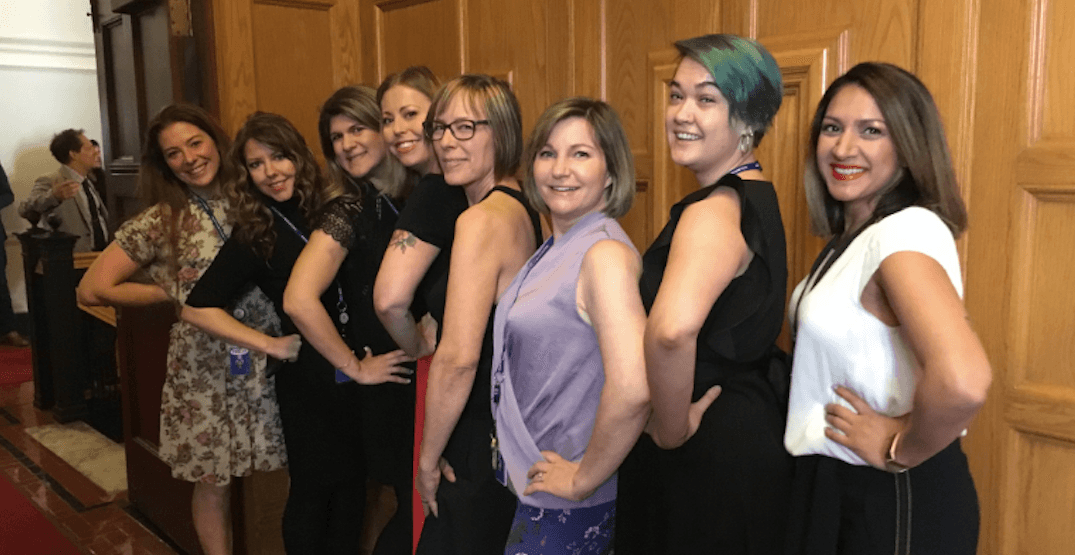 How women choose to dress while at work has apparently become a hot topic in the BC Legislature, after reports that some have been asked to cover their bare arms, recently.

In a tweet, Shannon Waters said that women in the legislature are “being told our bare arms are unprofessional,” and “do not constitute proper business attire for the halls of the House.”

According to Waters, staff from the Sergeant at Arms office have told at least three women in the past two days that “they need to cover up in the hallways.”

Do we look unprofessional to you? Women in the @BCLegislature are being told our bare arms are unprofessional, do not constitute proper business attire for the halls of the House #bcpoli pic.twitter.com/1lJSWngP34

Cowichan Valley MLA Sonia Furstenau also tweeted that one of her staff was told to wear a slip under her dress as it was clinging to her legs as she walked.

“Heaven forbid people realize she has limbs under her skirt!” she added.

One of my staff was told by the leg assembly to wear a slip under her dress as it was clinging to her legs as she walked. Heaven forbid people realize she has limbs under her skirt! The women in this building are here to work, not dress for outdated rules. @BCLegislature #bcpoli pic.twitter.com/OOPLkCMypg

Speaking to reporters about the dress code question, Finance Minister Carole James said she thinks it’s “really quite extraordinary” that questions around dress codes are still an issue.

“I think we all know that this is a professional environment and people dress for business clothing in the workplace and I think it’s ridiculous that we have people policing that,” she said.

James said she believes a review of the dress code is “long overdue and needs to be done.”

In a statement, the office of the speaker noted that the Legislative Assembly of British Columbia “has consistently applied a ‘conservative contemporary approach’ to dress codes in the Parliament Buildings, as first articulated in a decision of Deputy Speaker Davidson on July 21, 1980.”

In the “modern era,” the statement continued, “the Legislative Assembly should adhere to a gender-neutral approach to dress code expectations. Contemporary business attire is expected.”

The statement added that members, staff, and other building occupants “who choose to wear traditional cultural attire, Indigenous attire, or religious attire are also very welcome to do so.”

The statement concluded by saying that “a further review of modern parliamentary dress expectations will be undertaken.”