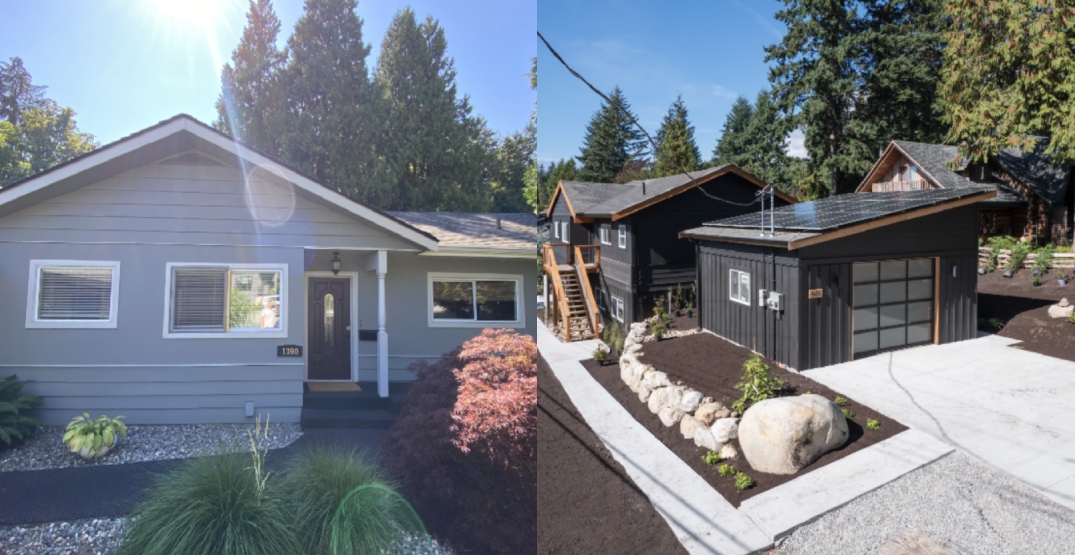 Before and after of a Vancouver Special concept home retained and renovated into a contemporary design. (Google Maps)

Enabled by federal, provincial, and local government policies favouring densification, developers are gobbling up single-family dwellings and then bulldozing the homes to build higher-density townhomes, condominiums, and apartment buildings. If you drive down Cambie Street or Oak Street, Broadway, around SkyTrain’s Evergreen Extension in Coquitlam, or James Bay/Esquimalt, you’ll see a glimpse of this Grand Demolition underway.

For sale and land assembly signs are ubiquitous.

There are many good objectives behind the push for densification including addressing the housing shortage crisis, slowing the upward pressure on home prices, building complete communities, and enabling investments in mass transportation. Unfortunately, the process to achieve urban density is proving unbelievably wasteful.

This year alone 2,800 single-family homes across Metro Vancouver will end up in our local landfills. Some of the homes being levelled are charming character homes built over 100 years ago. Some are well-renovated bungalows and ranchers from the 1950s and 1960s. Some are brand new modern homes built within the last 10 years. Vancouver, embarrassingly, on a per capita basis is the building demolition capital of the world.

As a result, over 250,000 old and new growth trees embodied in these homes will be thrown away this year alone. About 40% of the solid waste in our local landfills (250,000 tonnes) is demolished buildings. At many landfills organic solid waste undergoes anaerobic decomposition releasing greenhouse gases like methane and carbon dioxide.

Tired of witnessing the wastefulness of this Grand Demolition two years ago, I decided to join the effort to do something about it. I launched a project aimed at saving good homes with good bones from being bulldozed.

Before and after of an old single-family house structure relocated to the Sunshine Coast and renovated. (Glyn Lewis/submitted)

By picking up, moving, and repurposing entire homes onto the Sunshine Coast — where single-family dwellings still make sense — we are preventing waste and providing good homes for families who need them. Once the salvaged homelands are on a new property, we add solar panels, rainwater catchment systems, electric vehicle hook-ups, and other elements to maximize renewables and make the homes liveable for many years to come.

In doing so, we are addressing a market failure by proving development can be done differently. The challenge, however, is a labyrinth of regulatory barriers standing in our way, at both ends.

While many local governments promote themselves as Climate Change Leaders, they have not yet earnestly addressed ways to divert embodied carbon from landfills. Green demolition bylaws, enacted by Vancouver and Victoria, are a step in the right direction but they fall far short. To support home waste diversion on a grander scale we need much more cooperation and leadership from local governments.

Green demolition bylaws need to be strengthened and expanded. We should be discouraging outright demolition and incentivizing deconstruction and/or moving entire homes. To this end, home move-out roadway arteries need to be opened up.

This month, hundreds of beautiful homes will be bulldozed because we could not physically get them through a city to a barge site. Municipalities, telecommunication companies, and public transit authorities need to be doing much more to enable home moves and home repurposing. And on the Sunshine Coast, as an example, restrictive bylaws are preventing homes from being moved into jurisdictions.

With a long-term view, local governments can enable progressive companies like UnBuilders, Nickel Bros, and ours to save many more good homes from being unnecessarily thrown away.

We are ready and willing to be part of the solution.