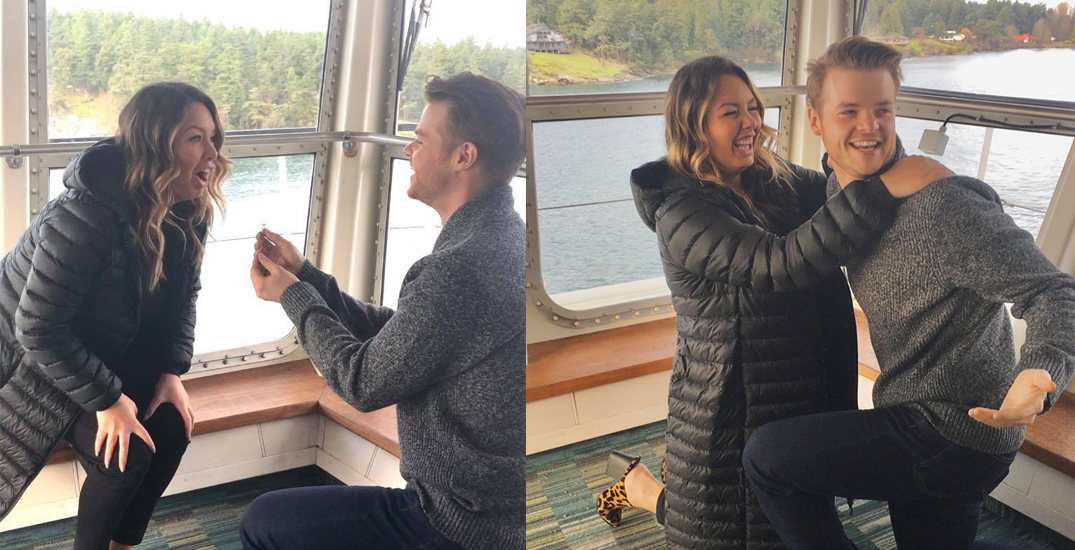 The ferry has played a major part in Ashly Gait and Jaydon Boughen’s relationship.

Both have spent hours on the boats going to visit each other during the two years the couple was long distance.

“We basically lived on the ferries,” Gait told Daily Hive, recounting the trips nearly every weekend between the mainland and Vancouver Island.

They met in Iceland on a work trip back in 2017, and remember the first time they reunited in Canada: it was on the ferry.

When Boughen got on one knee as the boat sailed through Active Pass on December 21, Gait was thrilled to say “yes.”

They used to take the ferry every weekend to visit each other, so that’s where he proposed https://t.co/pdSruHRyG4 pic.twitter.com/IDFIdCxsb4

Boughen kept the proposal plan under wraps by telling Gait he’d won a tour of the ferry bridge through a raffle at work. He told Gait to dress nicely, fibbing that the person who awarded the prize would take photos of the winners aboard the ferry.

Once aboard, Boughen told Gait he was asking what time the tour was. In reality, he was checking with staff that everything was good to go — he’d been planning the proposal with help from BC Ferries for weeks.

They ascended the boat’s bridge and met the captain and crew. Boughen honked the horn, and the crew offered to take a photo of the couple in front of the boat’s floor-to-ceiling windows (the view was “stunning,” Gait added).

“I was completely shocked and didn’t see it coming at all. I can’t believe the time he put into making it the best surprise ever.”

Active Pass is significant too, because it’s halfway between Vancouver Island and the mainland — a signal to the couple that they’ll see each other soon.

BC Ferries shared the story on their Facebook page, saying they were “honoured to have played a small part of this amazing milestone.”

Boughen and Gait plan to have their wedding this summer at their favourite winery on Vancouver Island.