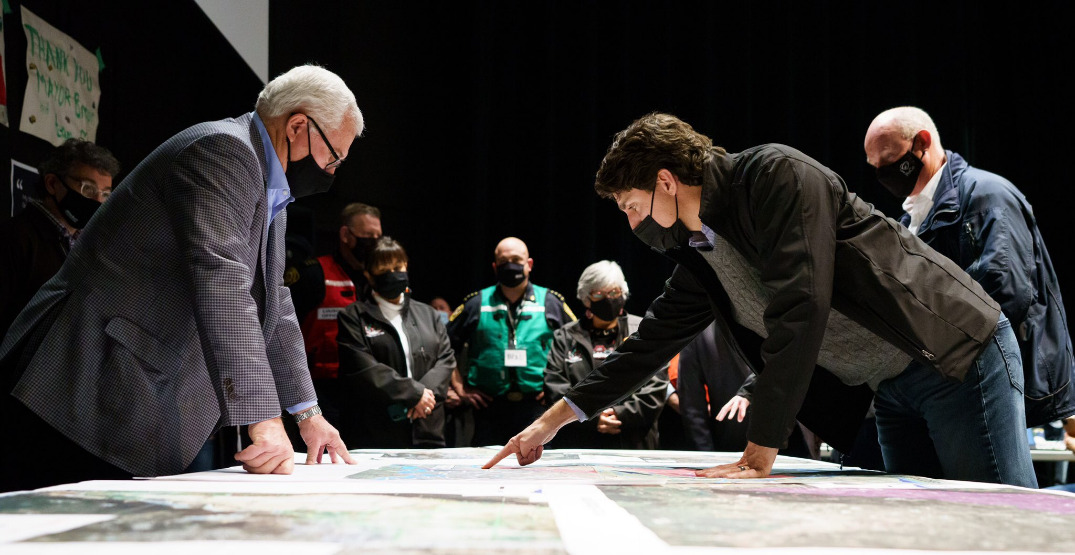 The Prime Minister in Abbotsford, BC. (@JustinTrudeau/Twitter)

In a joint partnership, the federal and provincial government will be matching every dollar donated to the Canadian Red Cross for BC flood victims, meaning every one dollar donated will equal three dollars for victims.

The announcement was made on Friday evening in Victoria by Prime Minister Justin Trudeau and BC Premier John Horgan.

Trudeau spent much of the day on Friday touring BC, including visiting areas that have been ravaged by floods.

“Never in our history have three primary highways been fractured at the same time,” he said. He went onto say that the collaboration between the BC and federal government would be key to helping BC recover.

Trudeau suggested that recovery efforts could be taking place for a long time to come.

“Premier and I spoke about the support that’s needed both right now and into the weeks, and months and yes, years to come. We will be there whether it’s immediate support on saving livestock, or supporting our farmers who have our backs year in and year out. We need to and will have theirs.”

“Which is why I’m so pleased that John and I have put forward a joint cabinet committee that will deal with disaster response, and climate resilience.”

When it comes to rebuilding efforts, Horgan suggested that the climate has changed dramatically since the Sumas Lake became the Sumas Prairie, and they will be taking this into account moving forward.

At one point during the media briefing, Trudeau was asked about what he saw when he toured the flood-ravaged areas of BC, and how he felt.

“Flying over, I saw the extent of the pools of water, the challenges of so many farms, so many communities impacted. But, what I saw mostly was extraordinary leaders on the ground.”

“This will not be the last crisis Canadians go through,” he added.

Earlier on Friday, Trudeau met with Canadian Armed Forces personnel who were assisting with flood recovery efforts in the Fraser Valley.

Whenever and wherever they’re needed, the brave women and men of our @CanadianForces go. Today, I met with some who have been deployed to Abbotsford – and I expressed my gratitude for the hard work they’re doing, day in and day out. pic.twitter.com/NxKb5rYXJv