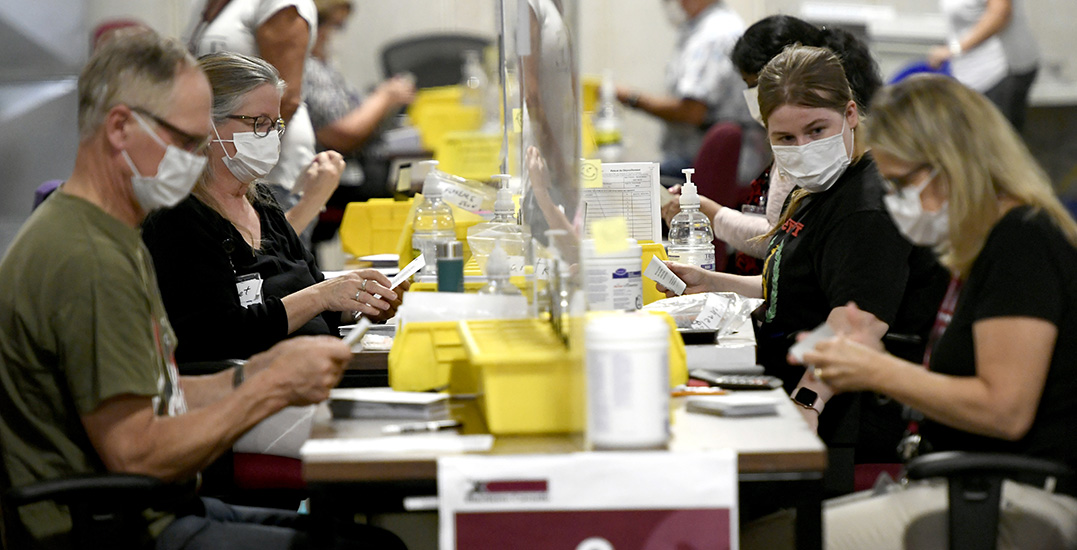 Early election results have the Liberals gaining slight ground in British Columbia, solidifying a trend across the country that had the party on track to form another minority government.

Decisive victories in BC went to incumbent Conservative, Liberal and New Democrat candidates by 9 pm on election night.

With a handful of ridings yet undecided, the Conservatives lost ground to both NDP and Liberals in the Lower Mainland.

The Liberals and Conservatives each led in 14 ridings, followed by the NDP with 13 and the Greens with one, although 10 ridings remained undecided.

Former Green Party leader Elizabeth May won in Saanich-Gulf Islands. Her only Green counterpart in Parliament, Paul Manly, was trailing both the Conservative and NDP candidates in his riding of Nanaimo-Ladysmith.

May said the loss for Green Leader Annamie Paul in Toronto was a disappointment.

She said she had concerns about the Green campaign in this election.

“I want to know how we failed to have a full slate. It was a shock to me.” May, however, did say the Green future is bright.

“We absolutely are here to stay.”

On the East Coast, support for the embattled federal Greens collapsed in Fredericton, NB, where Liberal Jenica Atwin, who defected from the Green party last spring, was in a tight battle with the Conservatives.

While many ridings in B.C. have remained consistent in the North, the Interior and on Vancouver Island, competition played out in about a dozen ridings – many of them in Metro Vancouver.

Battleground communities include Langley, Surrey, Coquitlam, Port Moody and Port Coquitlam, areas where the Liberals, Conservatives and New Democrats won and lost ground in the past two federal elections.

Vancouver Granville is set for a new representative after former cabinet minister Jody Wilson-Raybould, who left the Liberals to sit as an Independent, declined to run again.

In swing riding Port Moody-Coquitlam, the NDP took the seat from the Conservatives.

Elections Canada warned ahead of the vote that the pandemic could lead to longer waits for voters compared with past elections, due to public health protocols related to COVID-19.

That was true in North Vancouver, where a line ran down the block after polls closed at 7 p.m.

“If you are in line before your poll closes, you will be able to vote,” Elections Canada said in a tweet.

When Liberal Leader Justin Trudeau called the election, the standings in BC were at 17 Conservatives, 11 Liberals, 11 New Democrats, two Greens and one Independent.

The province’s Okanagan and Interior regions are traditionally solid Conservative territories. The NDP customarily does well on Vancouver Island, although the Greens took two seats there in the last election.

Trudeau pulled the plug on his minority Liberal government on Aug. 15, a little less than two years after Canadians first reduced the Liberals to a minority.

He argued that Canada was at a pivotal moment in history and Canadians deserved a chance to decide how they wanted to finish the fight against COVID-19 and build back the shattered economy.