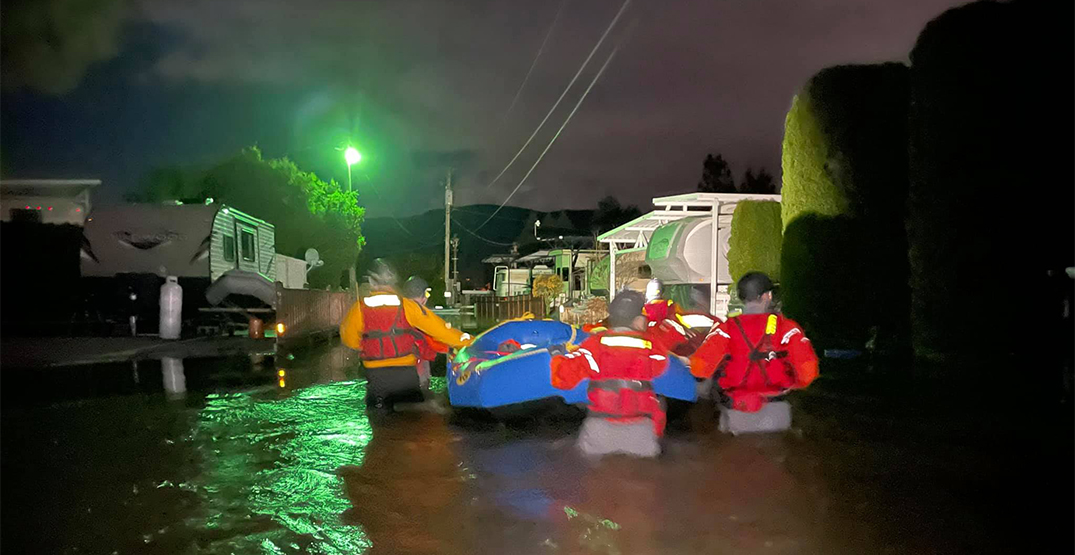 BC’s Search and Rescue (SAR) teams that usually field calls about lost hikers on backcountry trails are facing a slew of new assignments this week helping people trapped by flooding.

“This was a bit of an unprecedented event,” Dwight Yochim, senior manager with the BC SAR Association, told Daily Hive.

Ridge Meadows Search and Rescue helped a person get out of their flooded home in Mission, BC on Monday night, with the team donning waterproof clothing and carrying an inflatable boat across the flooded street.

A record-breaking atmospheric river dumped a month’s worth of rain over Southern BC this weekend, causing mudslides that washed away highways and flooding that’s forced entire cities to be evacuated.

Over the last 48 hours, SAR teams have been called out to find people stuck up forest service roads in mountain passes, search for people carried away in mudslides, and airlift drivers out who were trapped between two landslides on Highway 7.

That’s in addition to going door-to-door in the flooded Fraser Valley.

“Calls are coming in constantly,” Yochim said. “People aren’t just on the highways. They’re on the backroads trapped … there are now stories of cars being swept over some of the banks.”

He asked that stranded individuals and their relatives call 911 to be routed the closest appropriate emergency responders.

“The Lower Mainland is cut off from the rest of the province. There’s no way out.”

He anticipates people will need help for many days to come, and calls will keep the province’s 3,000 SAR volunteers and paid rescuers very busy.