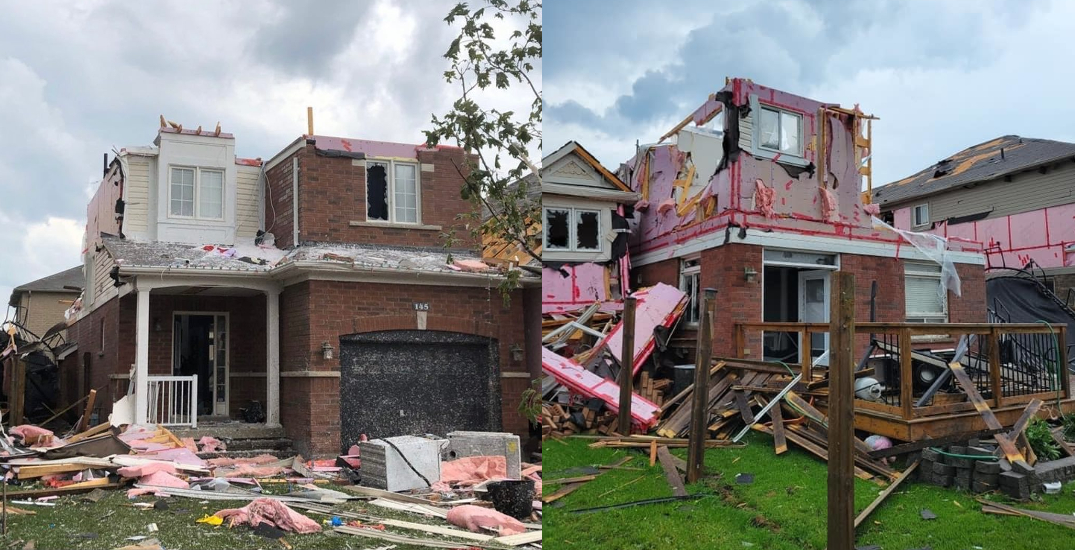 A Barrie City Councillor captured harrowing footage of the aftermath of the category EF-2 tornado that tore through the city on July 15.

In videos shared on social media, Natalie Harris captured the moment she emerged from the basement to find that the roof of the home she was in had been torn off.

We are ok. Just made it to basement. #barrie #tornado pic.twitter.com/snYtmbfCBs

Harris had just arrived at the home of her former partner, Jonathan, when he called and told her to get into the basement with their son, Adam.

The pair grabbed their two dogs and a blanket before “casually” heading downstairs.

“Maybe 30 seconds later, the power went out,” Harris recounted on Friday morning. “Right away, we could hear it was on the house.”

Each with a dog in their arms, Adam ushered her into the corner of the basement where they waited out the storm. The ordeal lasted “five or six seconds.”

“I was so afraid of what I was going to see up there. I was not expecting that,” Harris said.

“When I went outside, there was still insulation falling from the sky. This is my worst nightmare.”

If Jonathan hadn’t called, Adam would have been in his room, which was destroyed by the tornado, Harris said, adding that she didn’t get an emergency alert until after the storm.

Harris’s footage shows that neighbouring homes were damaged as well. Insulation covers lawns, shingles are scattered in the street, and cars have been overturned.

In the aftermath, residents went from house to house, checking on vulnerable neighbours and those who hadn’t emerged from the rubble.

Eleven people were injured in the tornado, which touched down in the southern part of Barrie on Thursday afternoon. The City confirmed there were no fatalities.

Harris said she is just grateful that everyone is ok, adding that “stuff can be replaced.”

“I was a paramedic for a long time, but that was something different. I was in pure… I don’t know, panic,” she said.

“I couldn’t find any words. how could you find words…when you come out of your basement, and you see the sky because the roof is gone.”