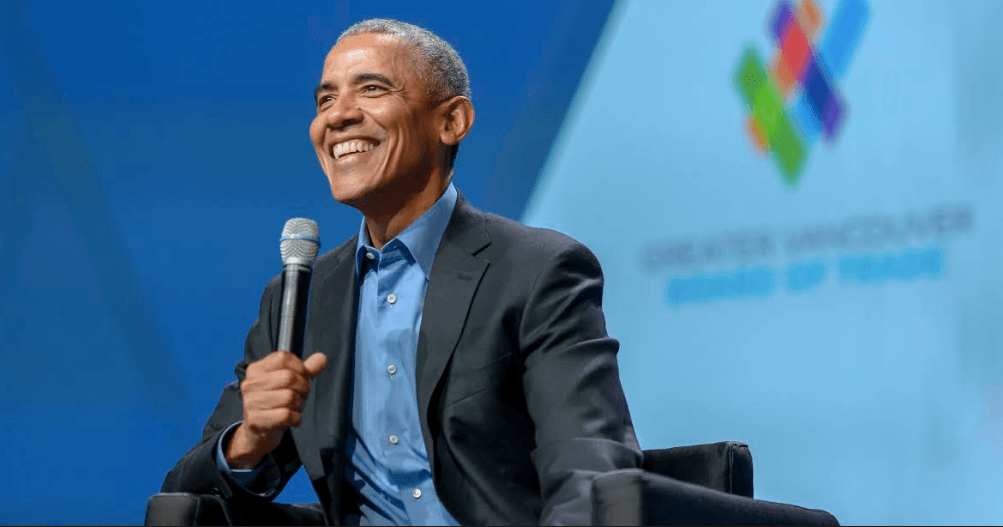 Vancouver welcomed former US President Barack Obama to the city with beautiful music, and a not-so-subtle dig at Donald Trump.

On a grand piano in front of a sold-out crowd of (mostly business attired) 3,500 at the Vancouver Convention Centre, surprise guest Sarah McLachlan opened the appearance with her 2003 hit “World on Fire.”

The songstress dedicated the song to the 44th President of the United States for all of the integrity he brought into public office and the “sincere hope that light will shine again.”

Moderated by Iain Black, President and CEO of the Greater Vancouver Board of Trade, the third Canadian stop of the “A Conversation with President Barack Obama” tour delivered musings on his eight years in office, Canada’s relationship with the US, his wife and daughters and what he sees as the biggest issues facing the current administration — and future generations. 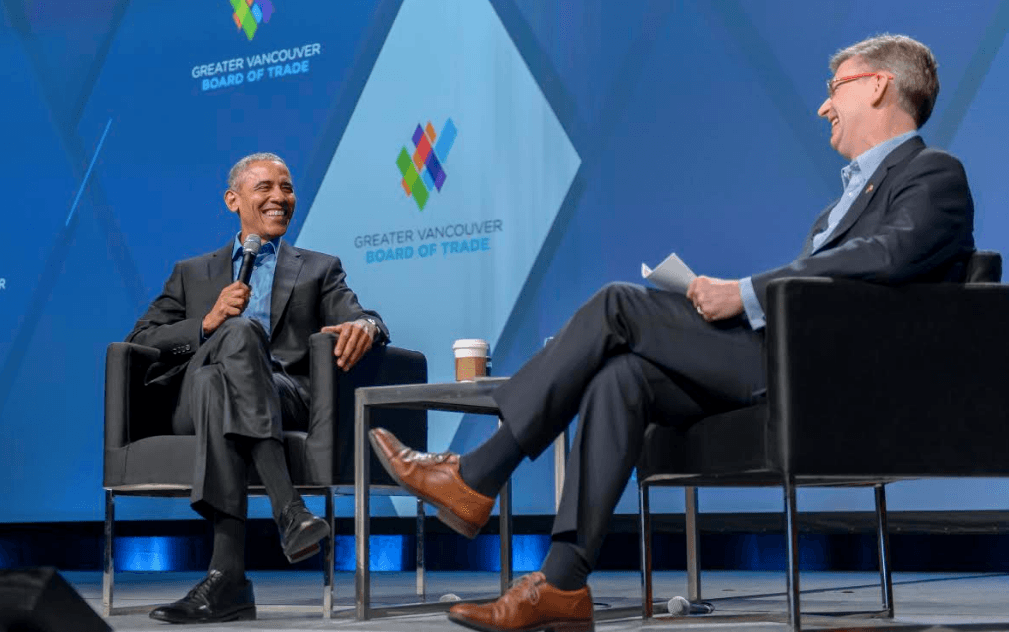 Taking office in 2008 in a time of great crisis in the nation — a depressed economy, war in Afghanistan and nearly a dozen financial institutions on the brink of collapse — the world leader remembers the pressure of the first six months as “extraordinarily intense.”

With two million government employees and the “guarantee someone somewhere is screwing up,” as the head of the White House he said he learned quickly that the “problems that arrive at your desk are by nature no one else can solve.”

“Man, that’s complicated — let’s send it to Obama and see what he can do with it,” he joked.

He decided early on the only people on his team that could make decisions are people with integrity, and that commitment resulted in a scandal-free two terms. “For all the mistakes we made, none had to do with integrity,” he said.

Taking the first of several gentle ribbings at the current US President, Obama said he was a fan of using the “outdated” values of “reason and analysis” to make decisions on critical decisions. “Old school,” he said, to laughter and applause.

Some of the biggest crowd responses of the one-hour talk came from gentle barbs at Republicans and unnamed mentions of the current administration, underscoring the delicacy of international relations in the country’s top office and why “it’s so important to have competent people in there.” 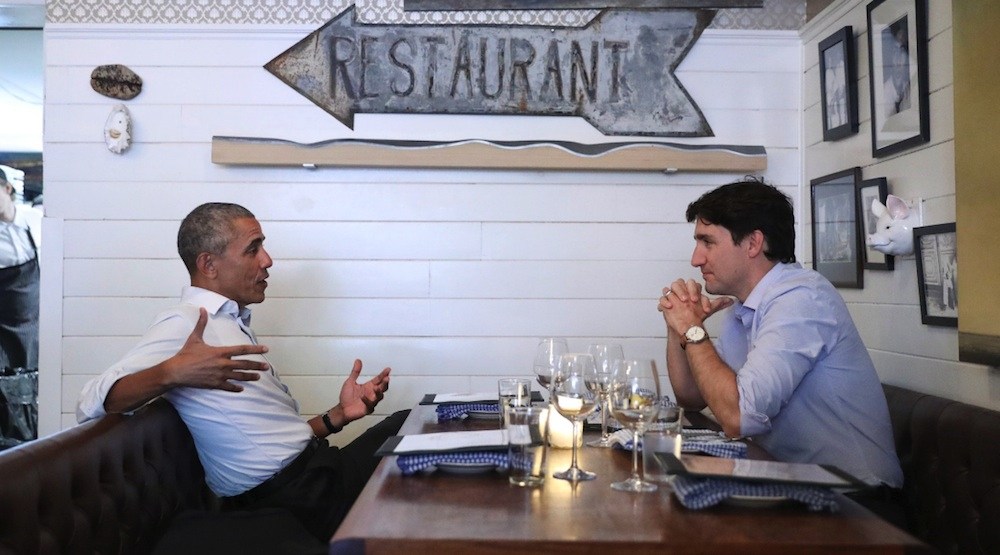 When asked what he learned about Canada during office (Obama first visited as leader in 2009 as his first port of call), Obama called Canucks “cousins,” saying “we share a border, we share a culture, values. Generally your hockey is a bit better.”

He says the tensions that existed between the two nations during his tenure were “really incidental,” and a big argument with Justin Trudeau in 2016 about softwood lumber wasn’t really an incident at all. He recalled a bilateral private meeting between himself and the Canadian PM when Trudeau wanted to take a full hour to talk about timber.

“I’m like, dude, I’ve got Syria, Paris accords. Really? This is how you want to spend your time? It’s not India-Pakistan,” he said, adding that people in this country shouldn’t feel too stressed about Canada-US relations. 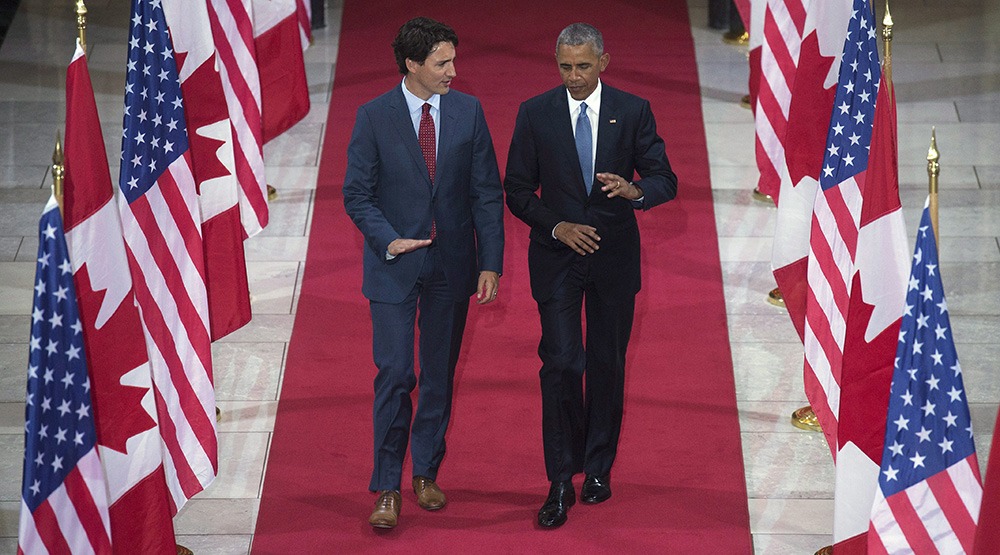 On his greatest political achievements, he cites the Affordable Care Act (ACA) — aka Obamacare — which is still “hanging in there.”

Looking to the future, Obama is concerned about the middle class eroding because of the meteoric rise in AI, or automation, in highly skilled industries, as well what he sees as a chronic underinvestment in education.

But his biggest worry for future generations is climate change, saying that even though like the US, Canada is an oil and gas producing country, we can’t close our eyes to what’s happening and need to be leaders on the world stage for reducing greenhouse gas emissions.

“I’m an old fashioned guy and I believe in facts. And the fact is the planet is getting warmer,” he told the crowd. “I have two daughters. Within their lifetime they will see these effects.”

With the largest impacts being felt in coastal regions — much like BC’s South Coast — Obama sees catastrophic effects in the next two decades and major oil producers, like Canada, can’t close their eyes to what’s happening — and must invest in cleaner energy technology.

The climate change message that Canada can’t afford to put off action was better received in BC than in Calgary just hours earlier, where Obama delivered his dire warning to a sold-out crowd at the Saddledome.

On life after presidency, Obama says the transition back to being “regular people” was easy because, unlike young pop stars or actors, he and Michelle didn’t really become national figures until they were in their 40s.

Giving props to his wife and mother-in-law, he credits the ability to stay grounded as the reason his daughters grew up to be “remarkable women.”

“We didn’t believe our own hype,” he said.

He says in their house now his closet is smaller and he’s jockeying for space with Michelle, and admits he’s no handyman.

“I can screw screws. I can hammer nails. That’s about it. I know my strengths and weaknesses.”

When asked about why her message of hope and inspiration is resonating so strongly, Obama says his “extraordinary, fiercely intelligent, charming, gorgeous, and authentic” wife has a powerful gift of tapping into the struggles faced by so many women of balancing family and work, while men “float on by just doing their thing.”

“What Michelle gives voice to is someone who loves being a mom, loves family above all else, loves looking cute, isn’t anti-man but gets pissed off about that stuff and says, surely we can do better,” he said. 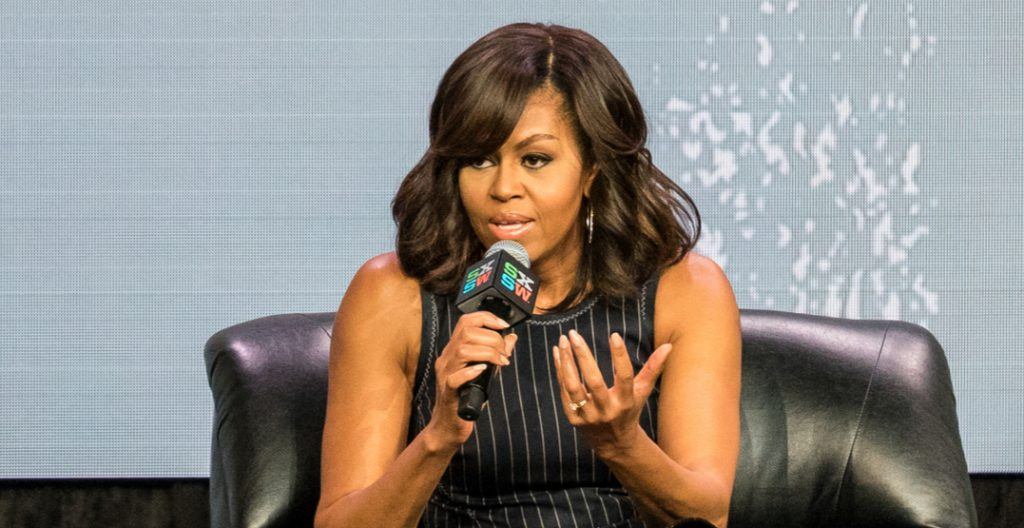 He says although gender equality has made some strides, women “just still have to put up with stuff all day long,” including in workplace meetings, where they are continually talked over.

Speaking to the next generation of leaders, including students who took in the speaking engagement, Obama boiled down the essence of leadership into diversity.  Surround yourself with diverse genders, races and opinions — creating a culture of integrity — and you will succeed.

“The best leaders typically are really good at empowering the people around them. They are predisposed to seeing potential,” he said.