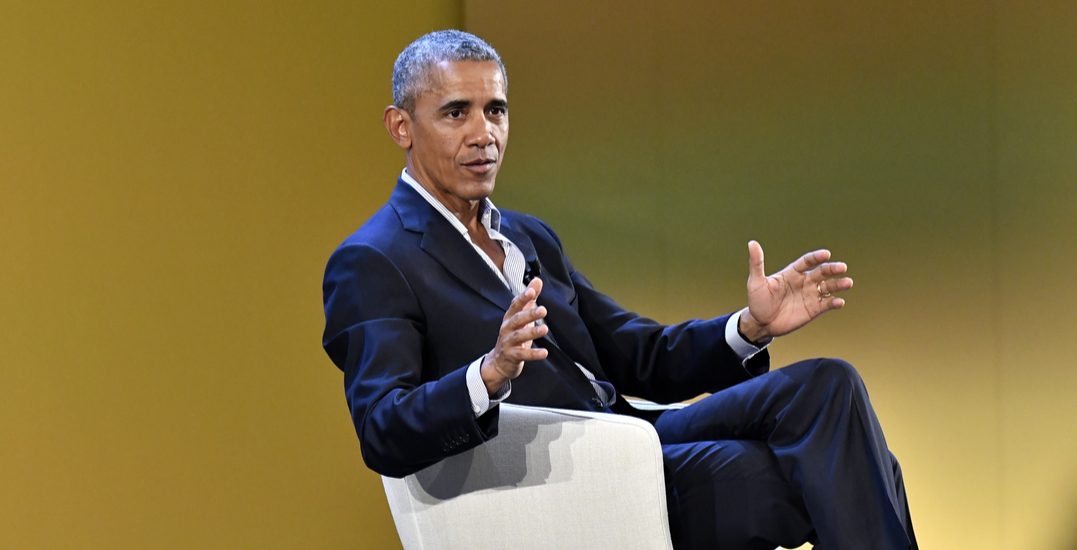 There’s a popular meme of Barack Obama riding a unicorn shooting rainbows from his palms. For good reason: As current western leaders stumble through bad decisions and scandals, Obama appears to be the manifestation of that meme, riding an untainted popularity into Canada for speaking engagements this week in Winnipeg, Calgary, and Vancouver. 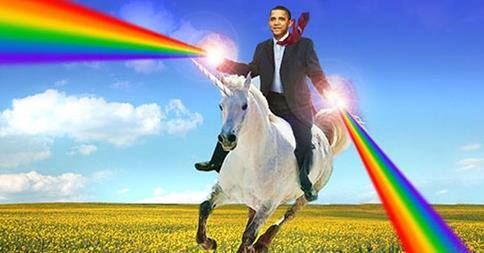 Obama blew into the White House on a message of hope and change. It’s one that Conservatives liked to lampoon as “hopey changey,” but it was a trademark he leaned on (without explicitly saying the words) through his noon hour speaking engagement at the Calgary Saddledome.

In the wide-ranging, hour-long conversation with host Dave Kelly, Obama touched on everything from social media (“we need to train young people to believe they can make change and to be effective at it. It’s more than a hashtag or a tweet”) to family life (“I’m the brunt of all mockery in my household”) to hockey (he opened praising the impressive run of the Flames this season while lamenting the fortunes of his hometown Blackhawks).

It was about 30 minutes into the conversation when Kelly brought up the energy industry that’s so important to Calgary, Alberta, and Canada’s economy. Instead of hope and change, Obama came with the change message first.

“I told you I believe in science, and here’s the science: it’s indisputable the planet’s getting warmer,” he matter-of-factly told the crowd.

“At the current pace that we’re on, the scale of tragedy that will consume humanity is something we haven’t seen. These are just facts.”

“And the question then becomes ‘how do we create a ramp whereby, in places like Alberta, we recognize we need to create new energy sources and clean up old energy sources?’ We can either do it thoughtfully and purposefully or change will happen to us. And by the time it happens to us, it will be too late.”

And, lest everyone leave feeling lectured, he followed it up with a dose of hope.

It was hard to tell if the response from the nearly sold-out crowd was lukewarm, respectful, or attentive. Obama walked out and exited to standing ovations, there were polite laughs to his frequent dad jokes, and scattered applause for a few shout outs to social justice issues, but mostly the response was understated.

If the polls are to be believed, Alberta is about to make a hard right after the past four years on the left. And for Obama to command an anticipatory audience offers hope for change in a world that is becoming increasingly siloed and divisive in its political discourse.

“Everybody has blind spots,” he said. “Diversity fills in each other’s blind spots. If you don’t have women in your room, you will underperform, you will not do well.”

He urged everyone to exit their echo chambers, listen to divergent voices and talk face to face instead of through keyboards.

“I tell Progressives and Liberals: if you’re so determined to deal with people who are only woke, how are you going to wake anybody else up?”

When he was asked what he hopes his daughters learn from him he answered simply “my optimism.”

“If you try, who knows? Stuff might work out.”

The Obamas love them some Canada lately. Michelle Obama will be making a return visit to Canada later this month as part of the book tour for her best-selling biography, Becoming.