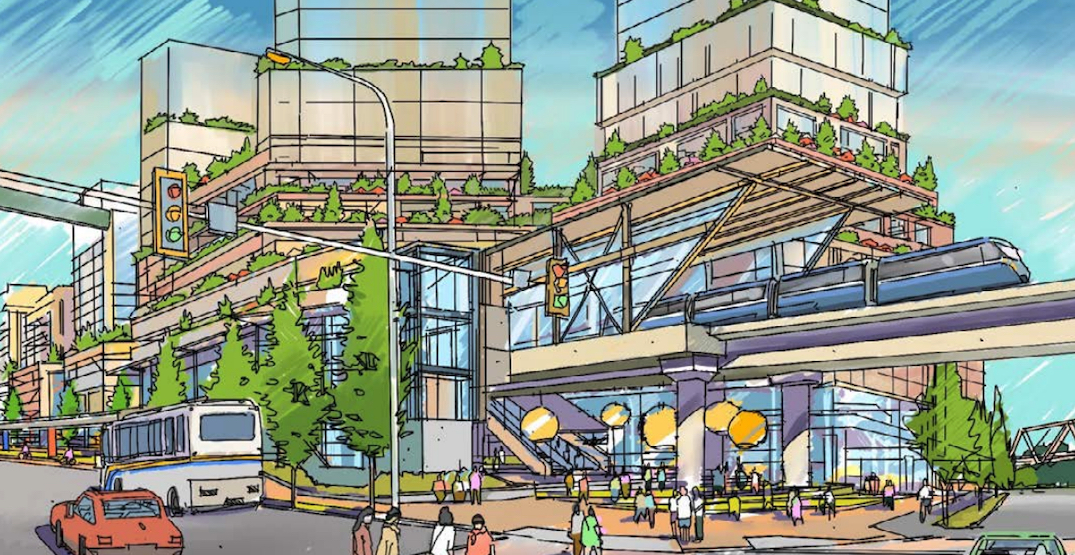 Conceptual artistic rendering of the highest densities and heights at Bainbridge Urban Village in the Village Centre around SkyTrain's Sperling-Burnaby Lake Station. (City of Burnaby)

Tens of thousands of additional residents could be calling Bainbridge Urban Village, the area around SkyTrain’s Sperling-Burnaby Lake, home at some point in the future.

The City of Burnaby is in the process of creating a master plan for the new district, which is generally framed by Broadway to the north, Winston Street to the west and south, and Phillips Avenue to the east.

There would be immense densification of the area with a mix of residential, commercial, and creative industrial uses.

But Bainbridge Urban Village is currently envisioned to have relatively moderate multi-family residential densities — both ownership and affordable rental housing — with neighbourhood-serving, smaller-scale retail and restaurants, as opposed to the regional-sized, high-density growth planned around SkyTrain’s Brentwood Town Centre and Lougheed Town Centre stations to the west and east. 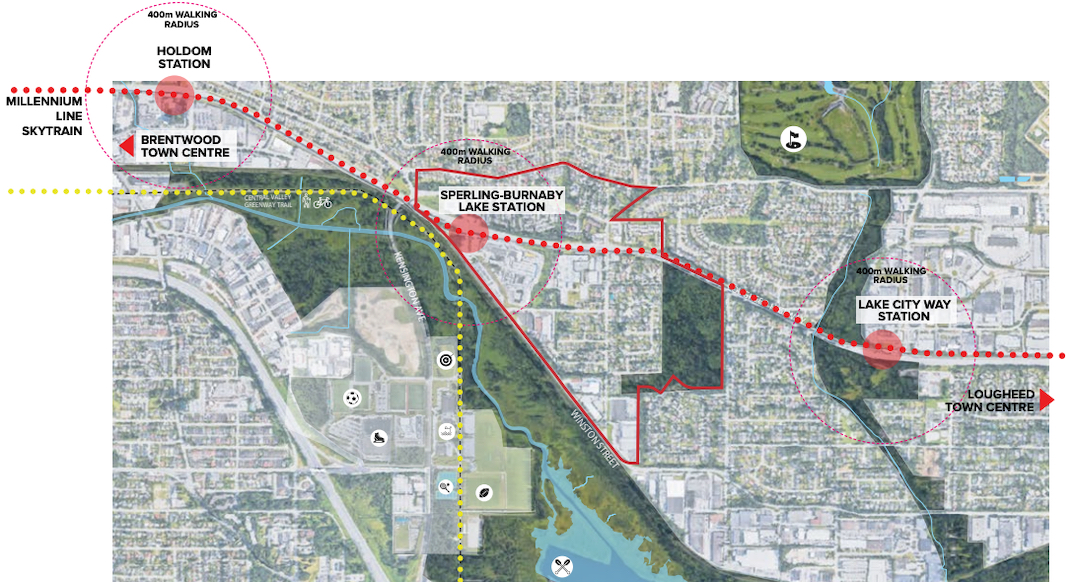 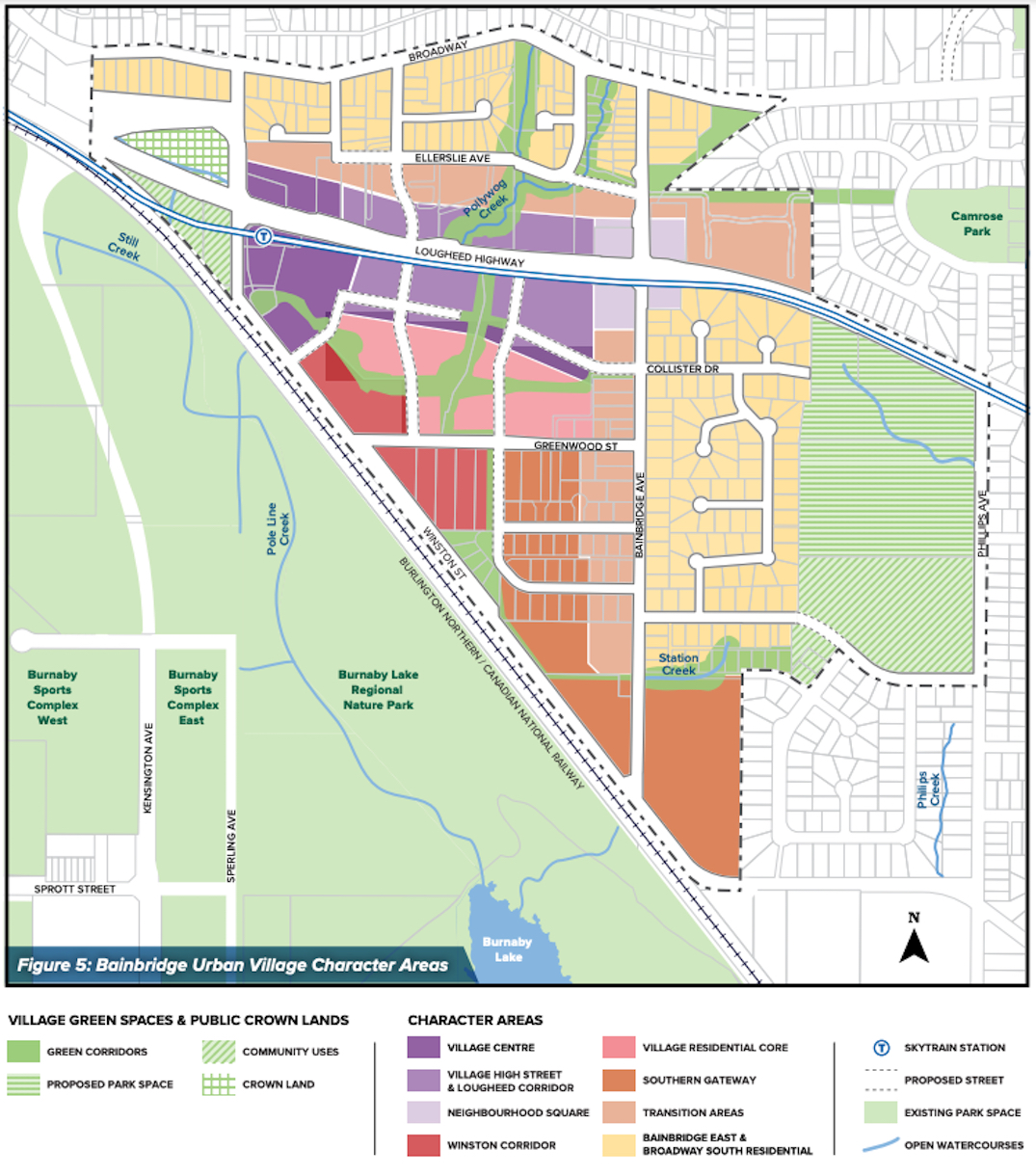 The Village Centre is slated immediately around the SkyTrain station, located at the western edge of the Urban Village — encompassing the 19-acre Saputo dairy plant immediately south of the station, which was sold to Peterson Group in 2018 for $209 million — as well as an area north of Lougheed Highway. Tower heights of between 10 storeys and 25 storeys are proposed, including a single landmark tower of up to 25 storeys to frame a public plaza next to the station.

TransLink’s bus loop immediately south of the station could be redeveloped with commercial space, a public plaza, and transit amenities and services, while retaining and enhancing bus service connections. 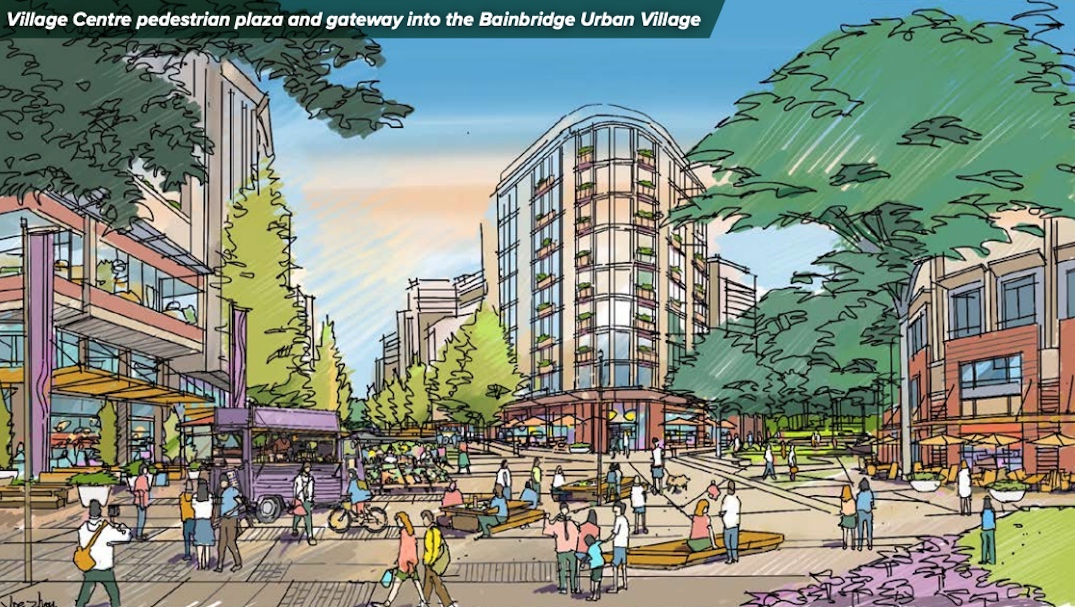 Conceptual artistic rendering of the highest densities and heights at Bainbridge Urban Village in the Village Centre around SkyTrain’s Sperling-Burnaby Lake Station. (City of Burnaby) 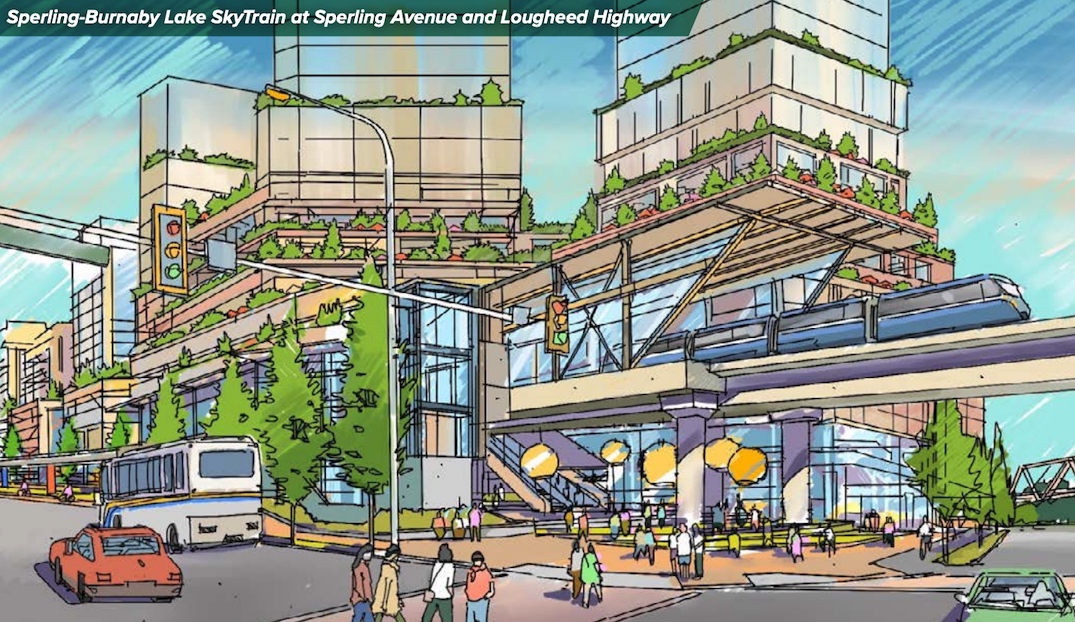 Conceptual artistic rendering of the highest densities and heights at Bainbridge Urban Village in the Village Centre around SkyTrain’s Sperling-Burnaby Lake Station. (City of Burnaby)

An east-west high street would span the Urban Village, starting from south of the station to Bainbridge Avenue. This would be a pedestrian-focused street activated with restaurants, retail, amenities, and space for temporary markets and festivals.

To the north, Lougheed Highway would of course remain as a regional arterial route, but the plan calls for extensive landscaping, pedestrian and cycling pathways, and new intersections for connections to the new street network established by the Urban Village. 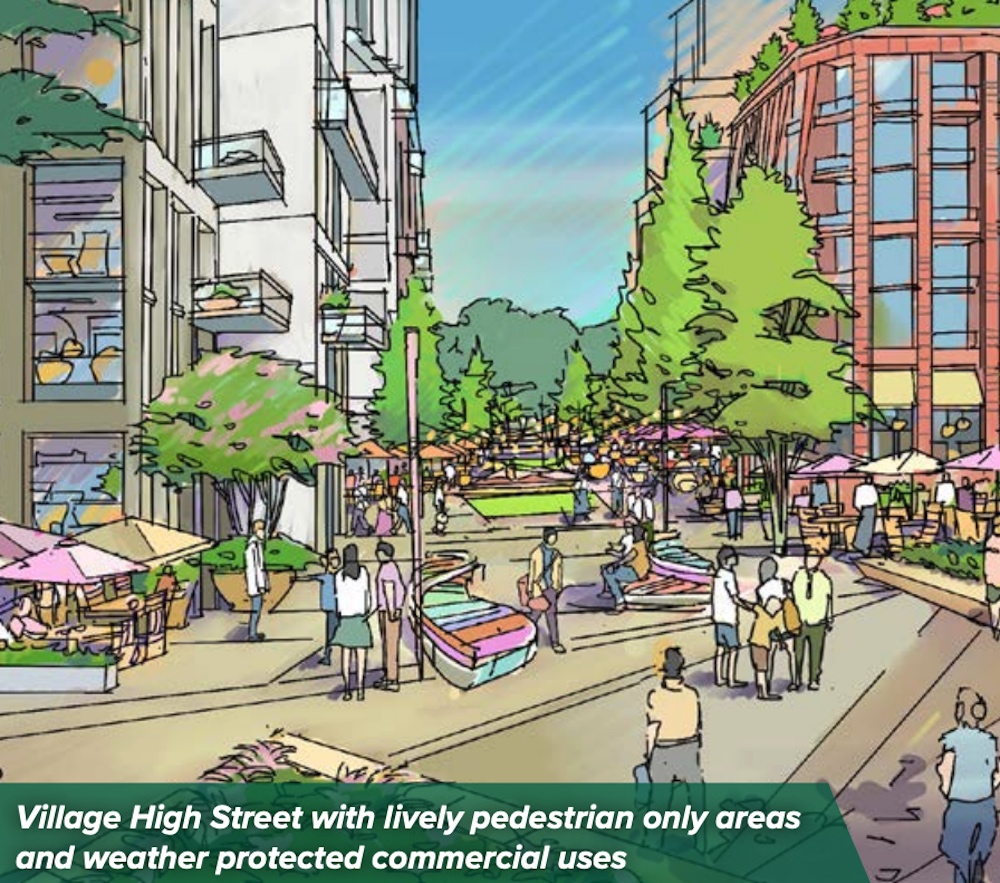 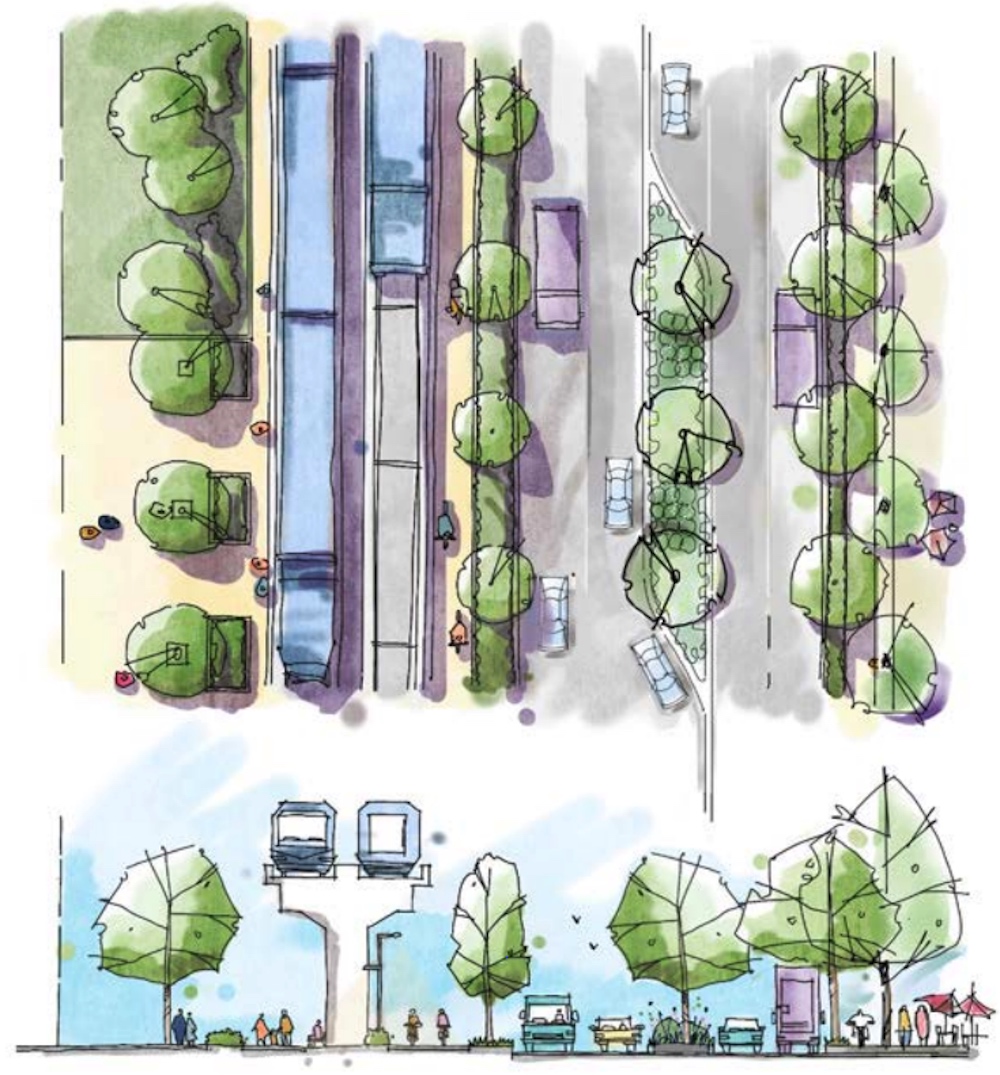 Improvements to Lougheed Highway within Bainbridge Urban Village, with landscaping, pedestrian and cycling routes, and activations by retail frontage. (City of Burnaby)

At the intersection of Lougheed Highway and Bainbridge Avenue, a Neighbourhood Square would serve as the area’s secondary commercial hub, with smaller-scale retail, restaurants, and community spaces. There would be mixed-use buildings between eight storeys and 10 storeys west of Bainsbridge Avenue, and between six storeys and eight storeys to the east.

Within the geographic core of the Urban Village, just southeast of the Village Centre, the Village Residential Core would have a large share of the area’s new multi-family homes, reaching between 10 storeys and 14 storeys. 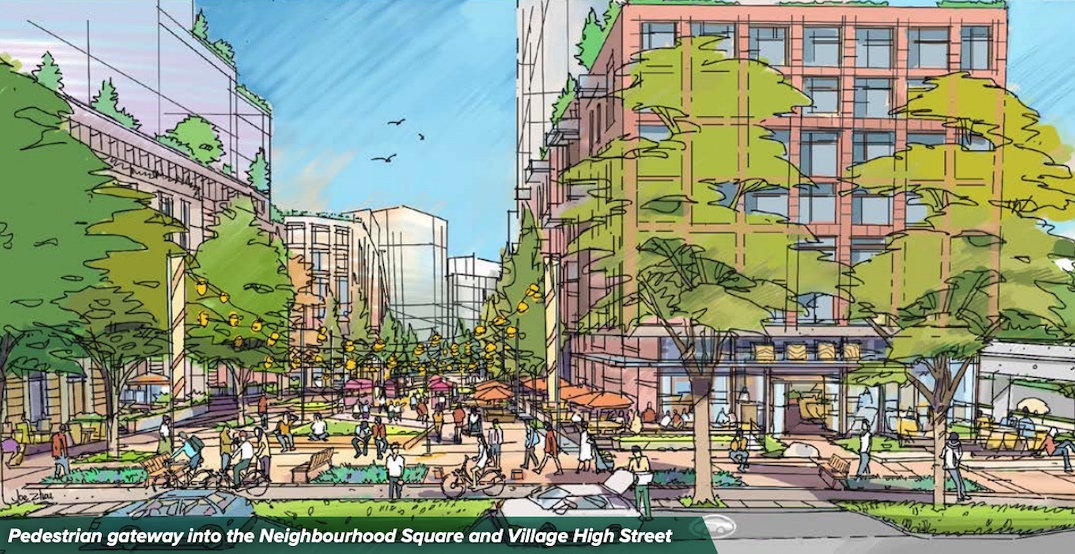 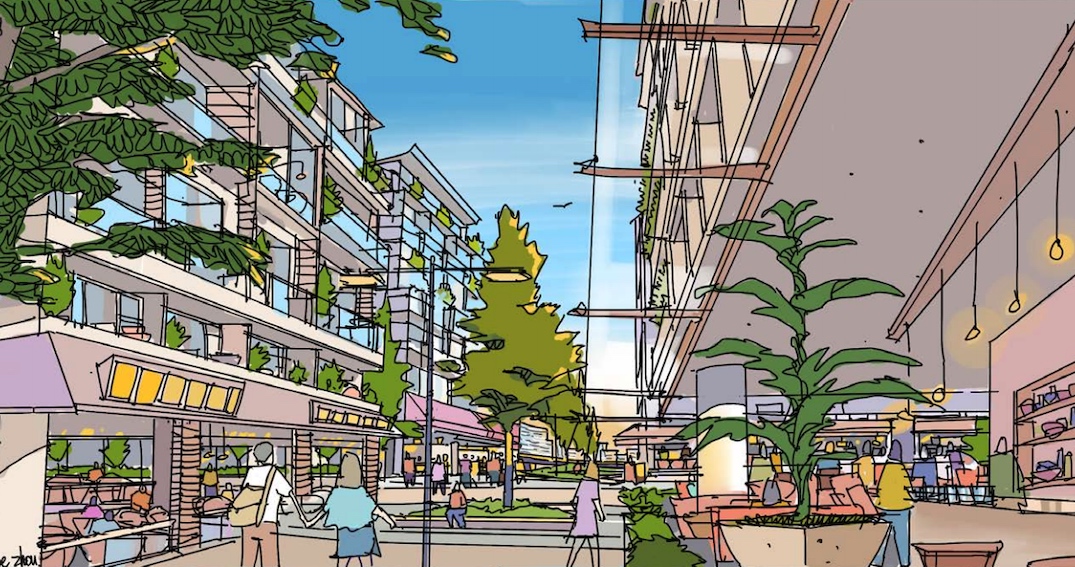 The sites generally south of Greenwood Street would accommodate low-to-mid-rise residential forms or stacked houses, with heights of up to eight storeys or up to 10 storeys along the street.

Transition areas along the south side of Ellerslie Avenue and Queensbridge Drive would be generally three to four storeys, and the area west of Bainbridge Avenue would be up to eight storeys.

For the large single-family neighbourhood areas between Broadway and Ellerslie Avenue, as well as east of Bainsbridge Avenue and south of Lougheed Highway, a relatively modest density uptick of three or four storeys is proposed.

Along Winston Street south of the Village Centre to the area east of Bainbridge Avenue, residential towers would range between 12 storeys and 18 storeys. 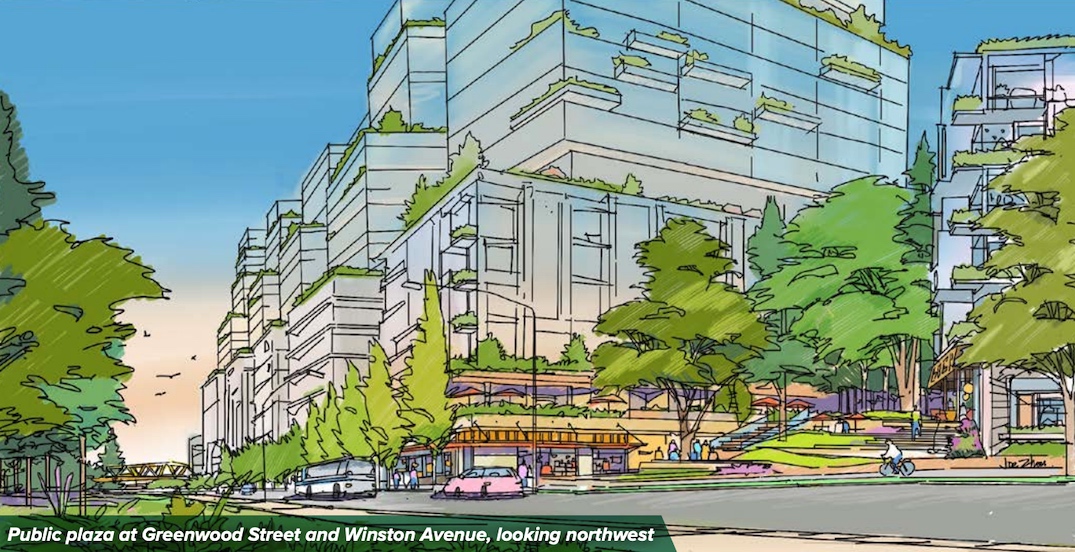 Conceptual artistic rendering of the heights and densities along Winston Corridor in Bainbridge Urban Village. (City of Burnaby)

The city intends to preserve existing natural spaces in the area, while also creating new open public spaces, landscaped green corridors, plazas, paths, trails, and sports fields, plus potentially a new elementary school at the northwest corner of the intersection of Phillips Avenue and Buffalo Drive.

Connections to Burnaby Lake Regional Park and Burnaby Lake Sports Complex to the south of Bainbridge Urban Village would also be improved, such as a potential new pedestrian bridge over Winston Street and the rail corridor.

Most of the overall district is within a 10-minute walk of the SkyTrain station and Burnaby Lake Sports Complex.

The municipal government is currently conducting public consultation on the Bainbridge Urban Village; an online survey is open through September 5, 2021. A draft master plan for the area is expected to be ready by Fall 2021 or early 2022. 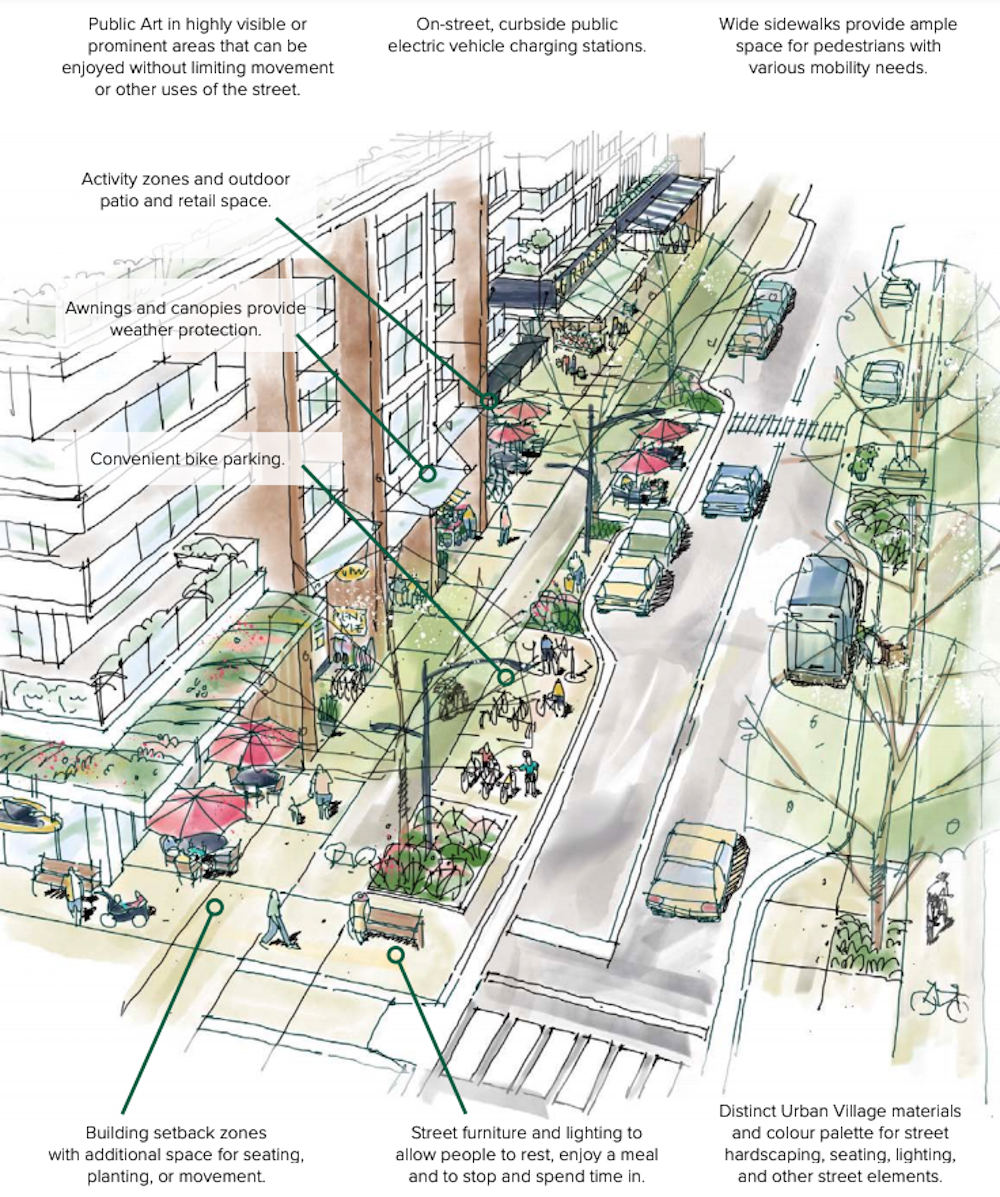 Example of a street with retail and restaurants in Bainbridge Urban Village. (City of Burnaby) 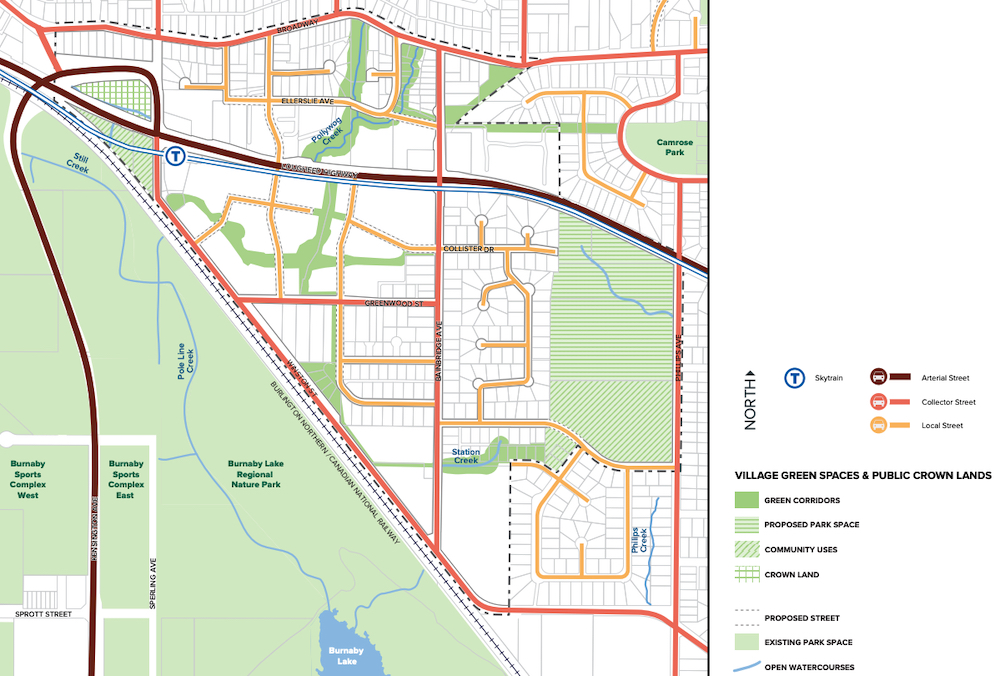 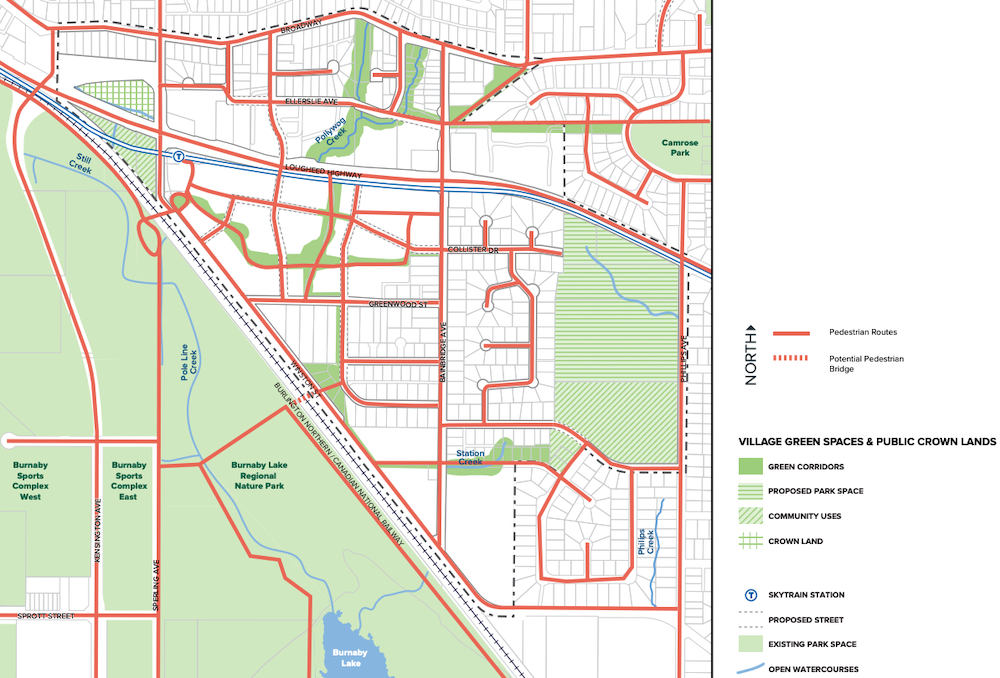 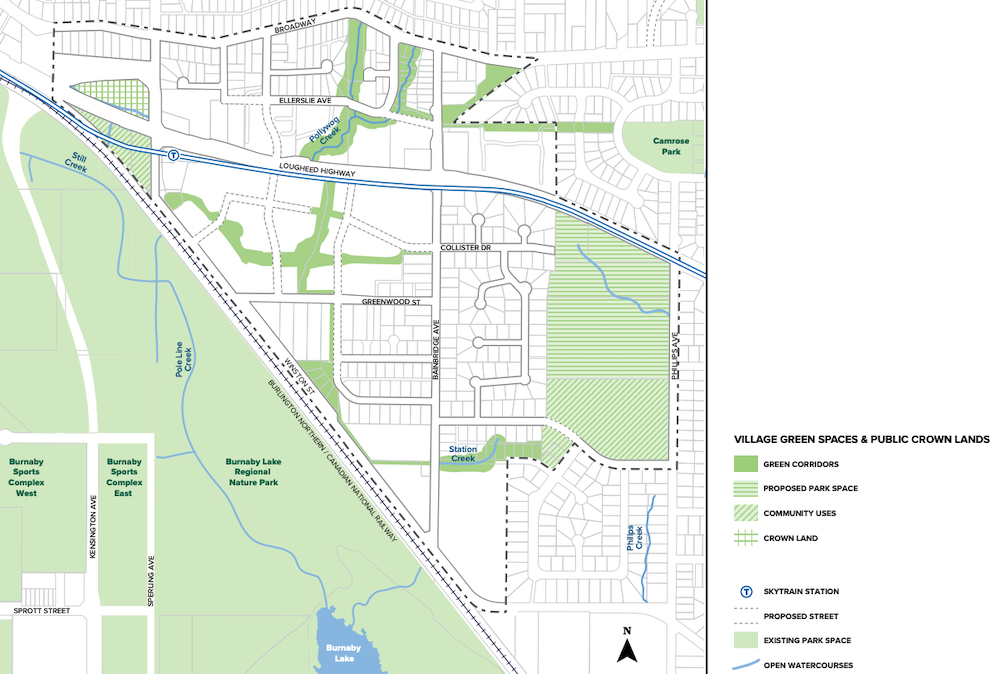