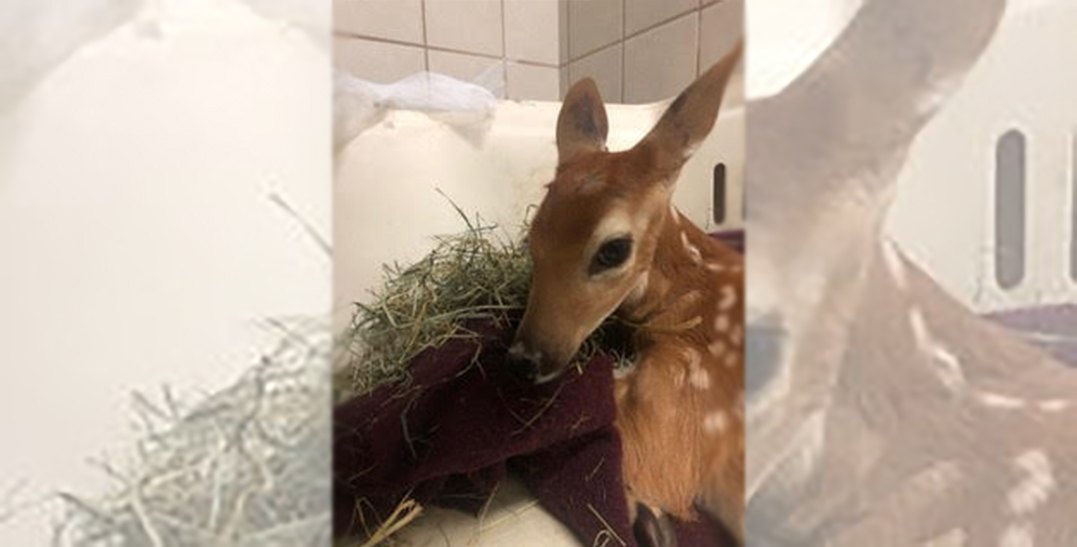 Time is running out for a baby deer in Kelowna and now the veterinarian hospital taking care of the wild animal is pleading for help to all of Canada to try to help find the fawn a home.

Earlier this week, the wee one was dropped off at Rose Valley Veterinary Hospital in BC’s Okanagan with a fractured leg. It’s been determined that the leg needs to either be amputated and replaced with a prosthetic, or the young animal will be euthanized.

The hospital said it has until the end of the day Thursday to find the baby deer, named Gilbert, a licensed sanctuary because there are laws under BC’s Wildlife Act that state wild animals are only allowed to be under human care for a certain period of time.

In a phone interview with Daily Hive Vancouver, the veterinarian taking care of Gilbert, Dr. Moshe Oz, said that Wednesday was the deadline originally, but the BC Conservation Officer Service has since given the vet hospital an extension so staff can try to find a new home for the baby deer as he can’t be rereleased into the wild.

Good afternoon our fantastic clients! We have a small deer that we have named Gilbert who has come here and he needs…

“We are trying to do something different and the idea behind it is to try to save Gilbert — he’s young, he’s a fawn, all of his life is in front of him,” said Oz.

Oz says he understands the logic behind the law, and agrees that you can’t “just have a deer in hospital for weeks and months,” but the timeline is tough to swallow.

He said staff have been working around the clock in efforts to try to find a new home for Gilbert, spending the night making phone calls and trying to come up with some kind of lead that would help them find a facility.

He now wants that message heard across the country:

“If somebody has any connection or any idea for this kind of licensed facility in all of Canada — let me know, please, and try to put some pressure on them to understand the necessity of it, and second thing is, you know at the end of the day those wild animals don’t have a voice and the first…. and the most common and the most practical way of dealing with them is to euthanize them if something happens, but maybe… maybe… for a few of them there is a different way around, and maybe we can help and sky’s the limit in what we can do so why not try to help.”

“We put a man on the moon so maybe we can save a small baby Gilbert,” he said.

Oz said options are limited in BC for finding Gilbert a home, that’s why he’s asking for all of Canada’s help to find leads.

Daily Hive has reached out to the Ministry of Environment for comment, it said “the BCCOS is aware of the deer at the Rose Valley Veterinary Hospital but has no update at this time.”