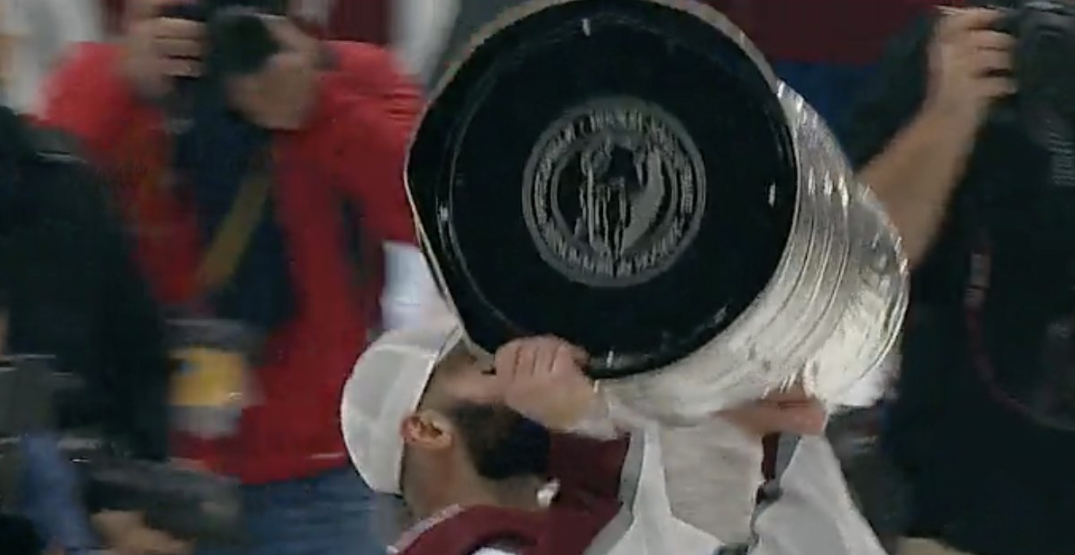 The Colorado Avalanche sure left their mark, er, dent, on the Stanley Cup.

On Sunday night in Tampa, Colorado defeated the Lightning by a 2-1 score to capture the NHL’s biggest prize.

And they learned quickly that it can be a little bit slippery, especially if you’ve never lifted it before.

Within minutes of winning the 2022 Stanley Cup, the Avalanche were already spotted with a large dent in the side of the 35-pound trophy.

We don’t have to go too far to find the culprit, though.

26-year old Avs forward Nicolas Aube-Kubel took a bit of a spill bringing the trophy back into the team photo, and dropped it on the ice.

yes, yes it is pic.twitter.com/jeYnDAccrH

Here’s a few other looks:

The Avalanche have had the Stanley Cup for exactly 15 minutes and already put a massive dent in it pic.twitter.com/n8BTEHQ7qJ

THIS PHOTO IS SO FUNNY pic.twitter.com/SntonMTTLm

No matter though. While Aube-Kubel might have set a world record for the fastest dent after winning the Cup, he’s far from the first person to damage the over-century old trophy.

It’s not exactly clear when the Hockey Hall of Fame will get a chance to correct the dent, though. The party season is just beginning, with each player getting a day with the Cup in their hometown or a city of their choice. Then there’s the parade sometime this week in Denver, and a host of other events that ‘ol Stanley will be making an appearance at.

“I guess we’ll have a little chat with them soon [about fixing it],” Hockey Hall of Fame curator and ‘keeper of the Cup’ Phillip Pritchard said in a video from the NHL.

The @avalanche are already leaving their mark… 😉 #StanleyCup

The win was Colorado’s third Stanley Cup in franchise history, after winning in 1996 and 2001.