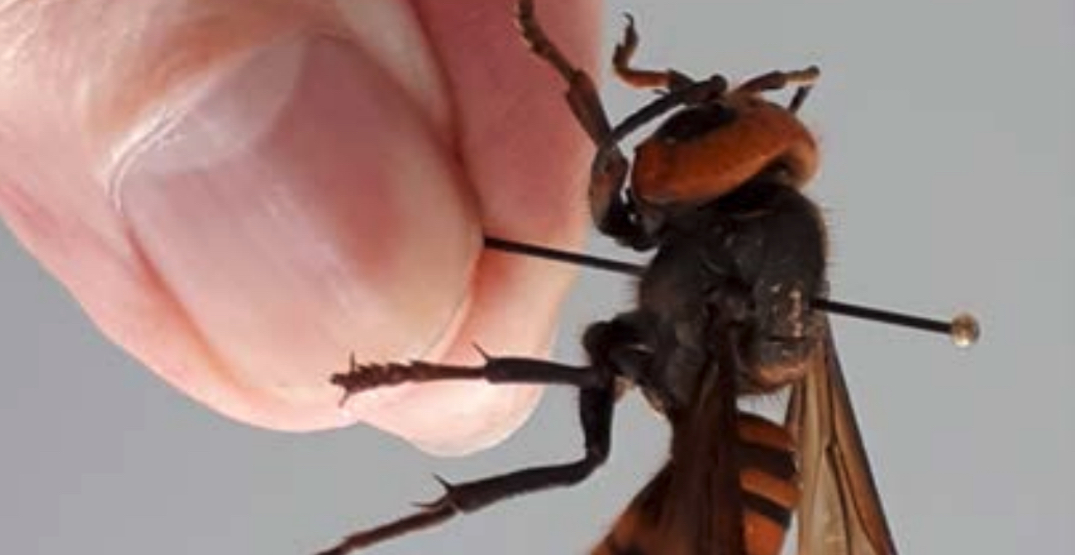 Asian giant hornet. (Government of BC)

The provincial government has issued a warning to residents of Metro Vancouver’s southernmost communities to be beware of the Asian giant hornet.

Residents along Zero Avenue — the 16-km-long east-west street that frames the Canada-US border — are being asked to report sightings of the invasive species, as they could emerge from their nests over the coming weeks and months as the weather becomes progressively warmer.

These hornets are hard to miss. They are significantly larger than the hornets local residents are accustomed to. Worker hornets are about 3.5 cm in length, while Queens can be up to 4 cm to 5 cm in length with a wingspan of 4 cm to 7 cm. Moreover, they have distinctively large orange heads with black eyes.

Specimens of the Asian giant hornet were found near Blaine, Washington State, and another specimen was discovered in White Rock in November 2019. Provincial officials believe there is a probability that nesting hornets are overwintering in this part of the region, with residents along Zero Avenue potentially being the first to notice them. In particular, wooded habitats like the areas near the Canada-US border are suitable hornet nesting grounds.

According to the BC Ministry of Agriculture, these hornets are a major honeybee predator, capable of destroying entire hives in a very short time period.

Asian giant hornets only nest in the ground, while other species of wasps or bees build their nests and hives in trees and buildings.

This particular species are generally not interested in humans, pets, and large animals, and will only attack when their nest is disturbed. However, their attack stings are painful and can be hazardous to human health.

Like the procedures for wasp and bee stings, any stings from these hornets should be treated with an ice pack or cold compress to reduce inflammation and the spread of venom. Anyone stung multiple times or has serious symptoms should seek medical attention immediately.

Provincial officials made their first Asian giant hornet discovery in Nanaimo in August 2019. A single nest was found and destroyed.

Anyone who believes they may have seen an Asian giant hornet is asked to call the Invasive Species Council of BC at 1-888-933-3722 or report online.