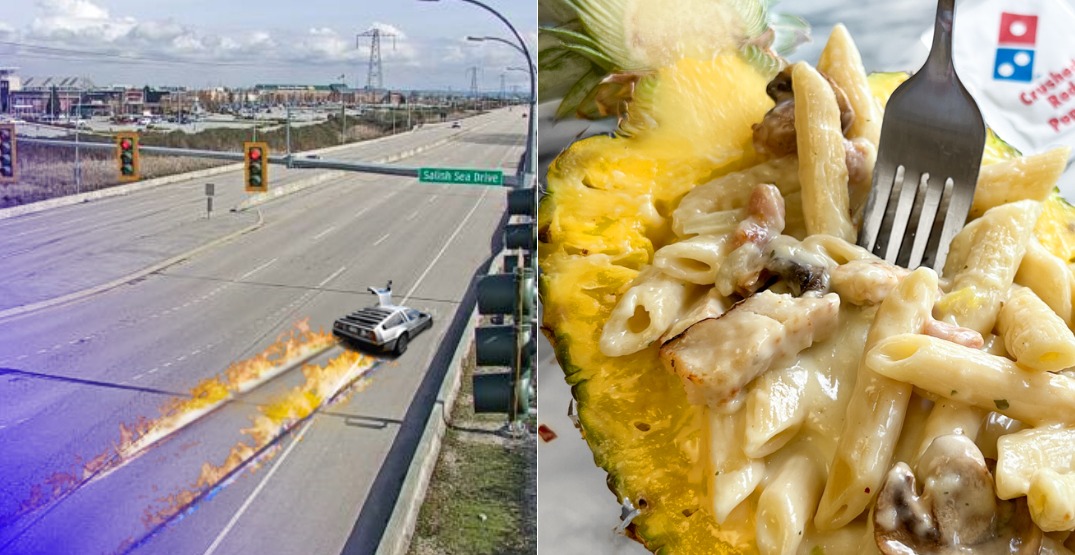 April 1 has come again and the world is feeling silly. This holiday is like the adult version of opposite day, except it includes businesses and storefronts, too — and some are refusing to miss out on the fun.

There’s just something extra hilarious about a company adding its two cents to the mess.

MEC released a fanny pack that looks more like a front-fastening backpack than anything else, telling followers the design is called the “Mega-Fan.” People didn’t really buy it, but some wanted to, weighing in through the comments to ask MEC for the prototype.

Ridge Meadows RCMP took to Twitter to say it was launching “invisibility cloaking technology” on April 1. Tactical use of invisibility, as we have first-hand witnessed in the movies, is one way for police to utilize the element of surprise when catching offenders, said Corporal Julie Klaussner. Citizens can expect to see (or maybe not see) these new uniforms and police car starting this week.

A men’s underwear store in Vancouver isn’t taking itself too seriously today, removing all the briefs from their mannequins and placing a sensual photo of George Castanza in the display instead. Even after all these years, that photo is still good for a chuckle.

The Barge in English Bay on Í7iy̓el̓shn beach has been purchased by @VancityReynolds and @blakelively. The details of the sale haven’t been made public, but in a tweet Ryan Reynolds said, “Since I was a young boy, I’ve always dreamed of putting my Aviation brand on a boat”. pic.twitter.com/Mcwokpcp9v

The barge that sat in Vancouver’s English Bay for an unreasonably long time has become somewhat of a local celebrity, and nearby businesses are still paying homage with jokes. White Spot posted on April Fools’ to say they were offering a “Barge Pak” instead of the regular Pirate Paks. One of the city’s favourite actors, Ryan Reynolds, couldn’t help but barge into the conversation about the city’s beloved vessel too. He says he and his wife bought it — a dream come true for the celebrity.

It would be cute if it were real, along with a few other barge jokes that made it to social media on April 1.

The DeLorean takes to BC streets

We’ve spotted what looks like a vehicle fire, captured on our #BCHwy17 Salish Sea Drive webcam.
Good time to share our blog about how to prevent vehicle fires: https://t.co/dukhBnUkaC pic.twitter.com/dUE5SbHn1u

Great Scott! A fake photo of the DeLorean ripping down Salish Sea Drive was posted by BC Transportation, under the guise of “spotting what looks like a vehicle fire.” Was it the best Photoshop job ever? No. But was it adequately ridiculous for the occasion? Definitely.

Switching to Ram has never been easier. #AprilFools pic.twitter.com/mF71lKiDiB

No more buyer’s remorse! The “RAM Truck Cover” allows you to cover up your old, dirty car with a tarp that looks like a brand new one. As long as it doesn’t flutter in the wind at all, it almost looks believable.

Introducing our very own pineapple bowls!

Click here to order now:
(If you don’t see a link it’s because it doesn’t exist, April Fools!) pic.twitter.com/bzHWNF9OuB

Why did you have to do this to us, Domino’s Canada? The chain posted to show its “very own pineapple bowls” stuffed with what looks like cheesy, mushroom-loaded penne. Disgusting. There are crushed red peppercorns everywhere on the counter, and it’s a disaster. At least it doesn’t exist in actuality.

Scented concrete at U of T

Have you heard of the latest innovation in concrete technology? It makes a lot of ‘scents’ to us!#engineering #concrete #civilengineering #uoft #universityoftoronto #aprilfools #construction #engineeringhumour #engineeringhumor #toronto #ontario #canada pic.twitter.com/HStbjwaN5E

Who knew the Civil and Mineral Engineering Department at the University of Toronto had such a scents of humour? The group invited its followers to “grab a scratch n’ sniff sample today” of scented concrete in five aromas: grape, lime, blueberry, lemon, and cherry. Something tells me they won’t really smell like fruits if there’s even any concrete to be shared.

Today, we are excited to roll out a new initiative that will help EPS members better negotiate construction and special events in the Ice District. @Sergeant_Jones #yeg #yegtraffic https://t.co/RQuaq92U7M

Video of a fake pilot project showing how these Edmonton police officers get around town was totally absurd. They talk to civilians before pulling out two tiny Razor scooters with sirens attached. Then they try to get away, but the gravel stops them and they ditch the ride. It was not very effective.

Lanka Jewels’ “biggest ring ever” is a rock alright — made out of only candy. Heads up: propose with a ring-pop and you might be in for a sticky situation. This jeweller is based in Vancouver, and it usually sells gorgeous pieces made of real diamonds, gems, and stones.