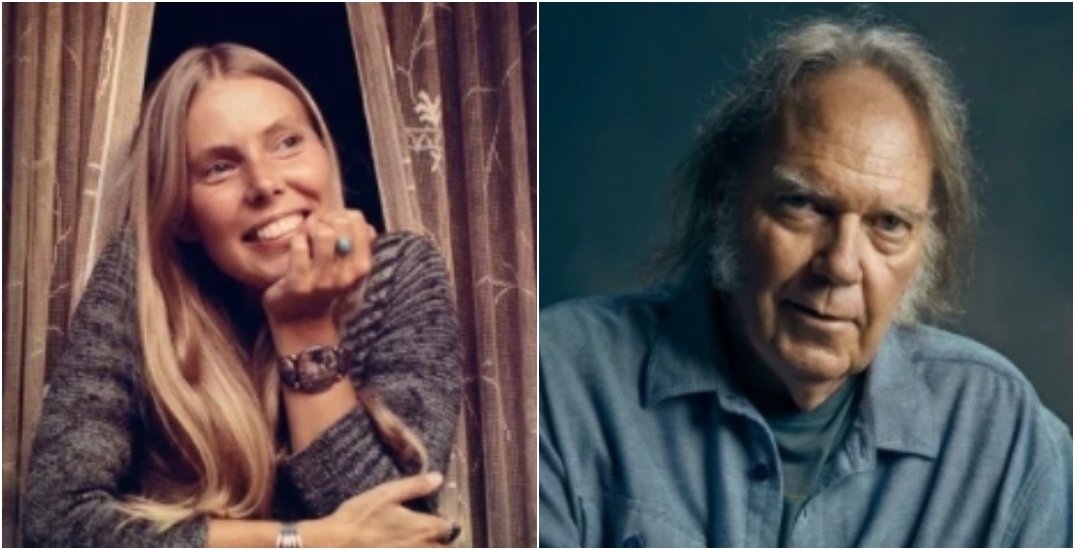 Apple Music wasted no time in showing off the discographies of Canadian icons Neil Young and Joni Mitchell on its streaming service, both of whom are no longer carried by Spotify.

Over the weekend, Young and Mitchell pulled their respective musical catalogues from Spotify after they voiced concerns about “vaccine misinformation” regarding certain episodes of The Joe Rogan Experience podcast.

On Monday, Apple made a few updates to its music homepage with two separate “featured collection” spotlights for both Young and Mitchell. The ads featured photos of the artists and captions that read, “Neil Lives Here” and “Joni Lives Here.”

To rub it in a bit more, Apple Music included a “punny” message regarding Mitchell’s music that referenced the title of her 1971 album Blue: “Don’t feel blue, all of Joni Mitchell’s music is right here.”

On Sunday night, Joe Rogan addressed the controversy that has surrounded him since Canadian music legends Young and Mitchell decided to pull their music from Spotify.

The podcast host said he was “very sorry that they feel that way,” before admitting that he was still a fan of both artists, even sharing a personal story about a Young concert he attended in his youth.

On January 26, Young called on Spotify to choose between him and Rogan in a now-deleted open letter posted to his website. “Most of the listeners hearing the unfactual, misleading, and false COVID information on Spotify are 24 years old, impressionable and easy to swing to the wrong side of the truth,” said Young.

“I realized I could not continue to support Spotify’s life-threatening misinformation to the music loving public.”

According to a January report from Midia, a research and analysis website focused on digital content data, Spotify currently holds 31% of the world’s streaming subscribers, followed by Apple Music at 15%.

It’s fair to assume that fans of Joni and Neil will be switching sides if they haven’t already.