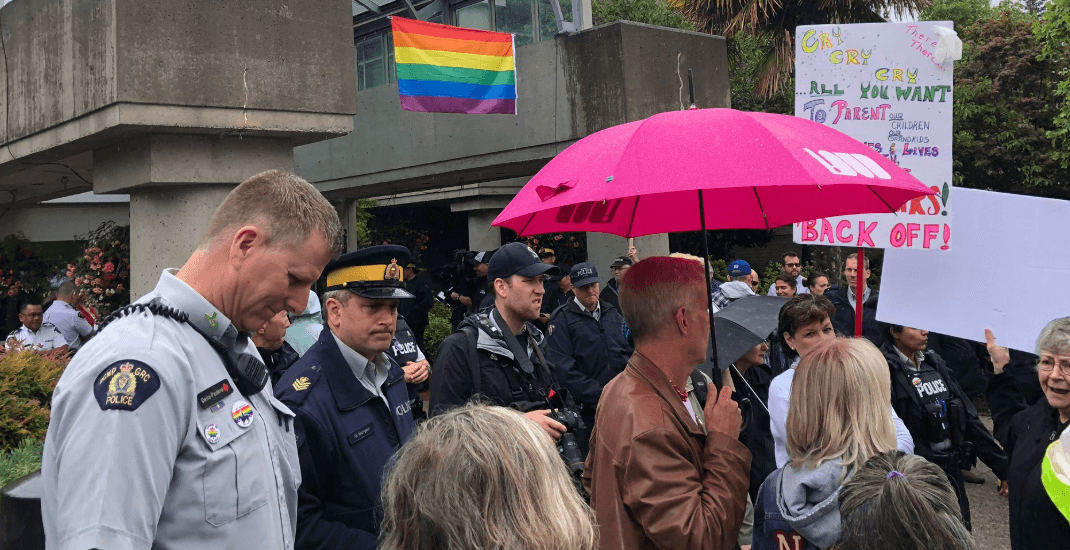 Anti-LGBTQ protesters gathered at the Surrey RCMP building this morning to demonstrate against the Pride flag being raised outside the detachment.

Last week, Kari Simpson, executive director of Culture Guard, warned Surrey RCMP  that “they’ll face a huge public outcry if they go ahead with plans to fly the gay rainbow ‘Pride’ flag outside their Surrey detachment near city hall.”

Simpson also sent a letter to Surrey RCMP warning of a “large and very public protest” if the flag was flown.

“The pride flag represents a sex activist political movement that is hostile to free speech to parental rights, and to freedom of assembly; and is currently targeting children with an extremist transgender and sexual orientation through the public education system,” wrote Simpson in her letter.

On its Facebook page, Culture Guard describes itself as a group that “works to protect the rights of all civil Canadians with a strong focus on protecting children, free speech, the rule of law, and the ability to communicate freely.”

The group has openly protested against LGBTQ rights and the sexual orientation and gender identity (SOGI 123) policy in BC schools.

Simpsons and Culture Guard supporters arrived at the detachment this morning with signs reading “Shame” and “RCMP is for Safety Not Politics.”

Simpson also posted a video on Culture Guard’s Facebook page, prior to the protest.

“Today is the day Canadians are standing up and saying no more rainbow privilege, no more LGBTQ extremism, no more special rights and promotion from government agencies. Agencies like the RCMP are to remain neutral. You cannot go promoting what has now become a political movement,” she said in the video.

Simpson said that she would also be presenting the RCMP with a request to fly her “Chrisitan-Canadian flag” as well as the flags of other cultural and religious groups.

“Whether you’re Romanian, Croatian, Pakistani — I’ll be making a request on behalf of the true diverse group of Canada that all their flags get flown as well.”

Despite the protests, the flag raising at the Surrey RCMP detachment went ahead as planned.

We are a diverse community and I invest in how that makes us better and stronger. Progressive day to stand with allies and those that serve @elenoresturko to protect the vulnerable and discriminated of our society #surreyrcmp #Pride pic.twitter.com/NHKiZTGnAA

Great show of support and inclusion by the @SurreyRCMP 🏳️‍🌈 pic.twitter.com/uDpX6YNcKB

Cpl. Elenore Sturko told Daily Hive that there were about 30 to 50 protesters on site but there “were no clashes” and demonstrators remained “fairly respectful.”

Sturko added that RCMP listened to the group’s concerns about the flag.

The Pride flag will be flown outside the Surrey RCMP detachment for the remainder of the week as the city gears up for its Pride Parade on June 29.