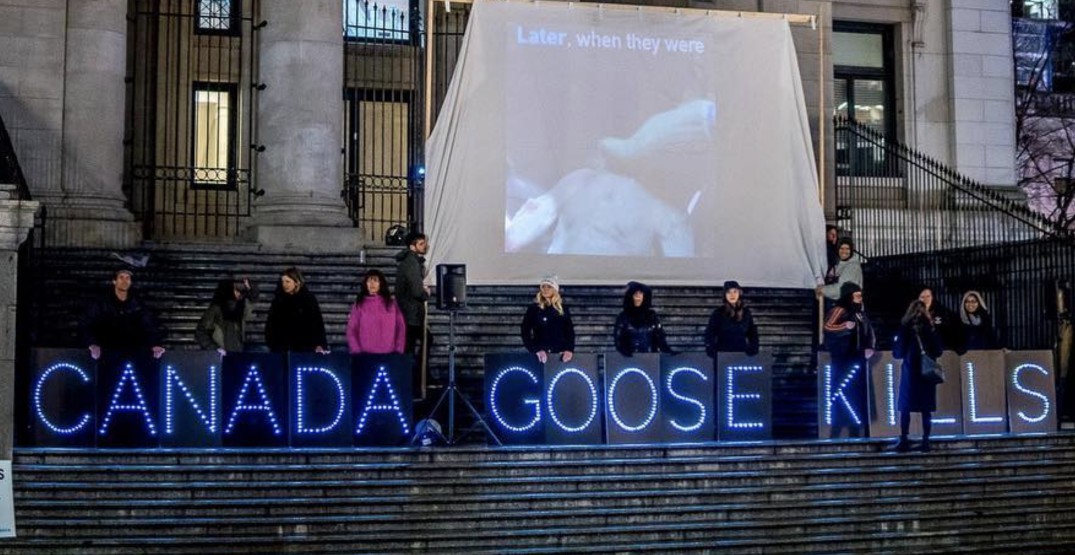 The protests are being planned by Direct Action Everywhere — a global organization that says its mission is to “achieve revolution social and political change for animals in one generation.”

Vancouver members of the group will march from the Vancouver Art Gallery into the new Canada Goose store holding giant illuminated signs reading “Canada Goose Kills” in order to create awareness of the company’s use of coyote fur and goose feathers for its jackets.

The clothing company was founded in Toronto and is now a worldwide manufacturer of jackets, parkas, hats, gloves and other winter apparel.

But animal rights groups like Direct Action Everywhere and PETA believe that the company does not treat animals ethically.

Last year, PETA released video footage of geese being crushed at a facility is says is a down supplier for Canada Goose.

“There’s nothing stylish about how coyotes and geese suffer before becoming Canada Goose coats,” said Direct Action Everywhere, in a statement.

“Coyotes are caught in traps, which can cause broken bones, agonizing wounds, not to mention immense fear. Coyote pups are left motherless. And hidden footage has shown that geese farmed for Canada Goose coats are crushed and suffocated before being ruthlessly killed in front of each other.”

The planned protests are not unique. The luxury apparel brand has seen vocal anti-fur protesters out in droves at the openings of other North American locations, including New York City and Toronto.

“Animals are here for themselves not for us to use,” she said. “We are taking something that belongs to them.” She says that fake fur is not hard to access and thinks that using real fur is not necessary.

For Kedem, the goal of the protests is to “just talk to people and tell them the truth.”

“We talk to people’s hearts,” she said.

But Canada Goose thinks that Kedem and her fellow protesters are “misinformed.”

“It’s not surprising, but it is unfortunate to see the lengths misinformed activists will go to in spreading their false narrative about our company’s animal welfare practices. Their allegations are without merit; we remain committed to the responsible use and ethical sourcing of all materials in our products,” said the brand in a statement sent to Daily Hive.

“These groups have a long history of using sensational tactics to try to gain media attention, and this is just another example. We sympathize with any Vancouverites exposed to their graphic propaganda and hope their aggressive actions do not impact the safety of bystanders.”

Kedem says that at least 50 demonstrators will take part in Friday’s protest.