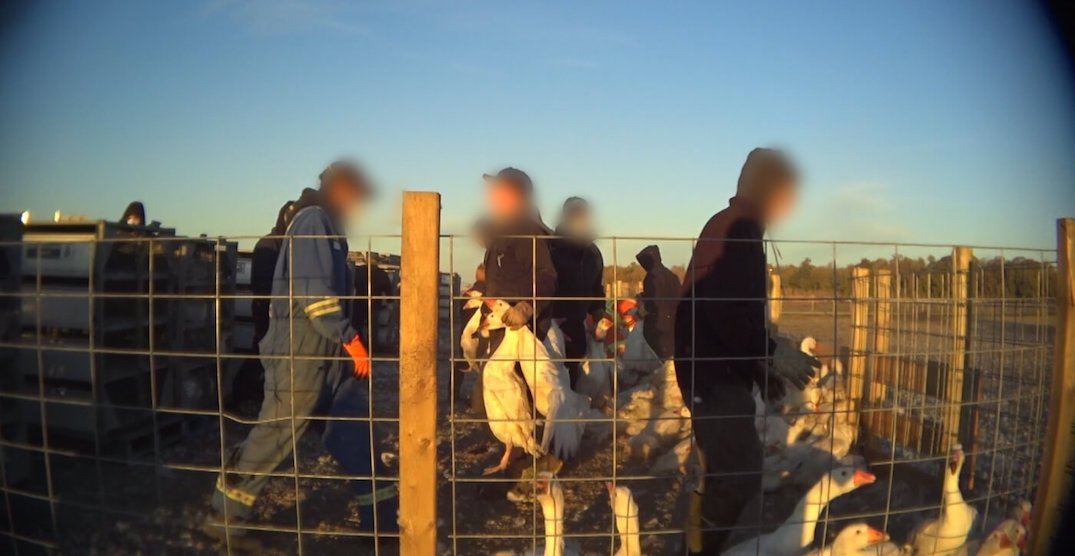 Canada Goose says that “ethically sourced down, fur, wool and shearling are an important part” of their story. They also say that they “believe all animals are entitled to humane treatment in life and death.”

But that’s not the reality PETA has recently uncovered on the farm of one of Canada Goose’s suppliers.

In a recently released video shot by the People for the Ethical Treatment of Animals (PETA), geese are shown being crushed and suffocated at Canada Goose down supplier James Valley Colony Farms, located in Manitoba.

The PETA eyewitness video shows that workers rounding up panicked geese, grabbing and carrying them by the neck, before cramming them into densely packed cages for transport to slaughter.

It’s a far cry from Canada Goose’s “Fur and Down Policy,” which is outlined on their website.

Canada Goose states that they “are deeply committed to the responsible use and ethical sourcing of all animal materials in our products.” The company also adds, “we do not condone any willful mistreatment and neglect of animals or acts that maliciously cause undue pain, injury or suffering.”

Canada Goose says that they recently implemented comprehensive traceability programs for both their fur and down to ensure they “are sourced from animals that have not been subjected to any unfair practices, willfull mistreatment or undue harm.”

In response to PETA’s recent allegations, the company released a statement saying this is a case of extremists misrepresenting the truth for their own agenda, and that this video is not part of the Canada Goose supply chain.

“The animals and the treatment of them shown in this contrived video are not a part of the Canada Goose supply chain, as confirmed by our sole supplier, Feather Industries,” Canada Goose said in a statement. “We regularly audit our full supply chain to ensure global standards as well as our own standards are being met at all times. We have strict supplier protocols in place should any part of our supply chain be found in breach of our stringent requirements.”

Last year, the company also released a video to show their commitment to traceable down. In it, they showcase Aaron Hofer, a Hutterite goose farmer, who “cares deeply about the welfare of his animals,” according to the video.

The video, which shows geese running free, describes Hofer as one of Canada Goose’s suppliers of high-quality down.

PETA says it has filed a complaint with the US Federal Trade Commission and Canadian Competition Bureau for deceiving customers regarding the welfare of geese used for down in Canada Goose’s products.

It has also urged the company to stop selling down immediately, which may prove to be tough for a company known for its warm coats.

“We use down because it’s recognized as the world’s best natural insulator, providing approximately three times the warmth per ounce as synthetic insulators,” states Canada Goose, a founding member of the Down Association of Canada. “Each ounce of down has approximately two million fluffy filaments that interlock and overlap to create insulating pockets of air, which is what keeps you warm.”