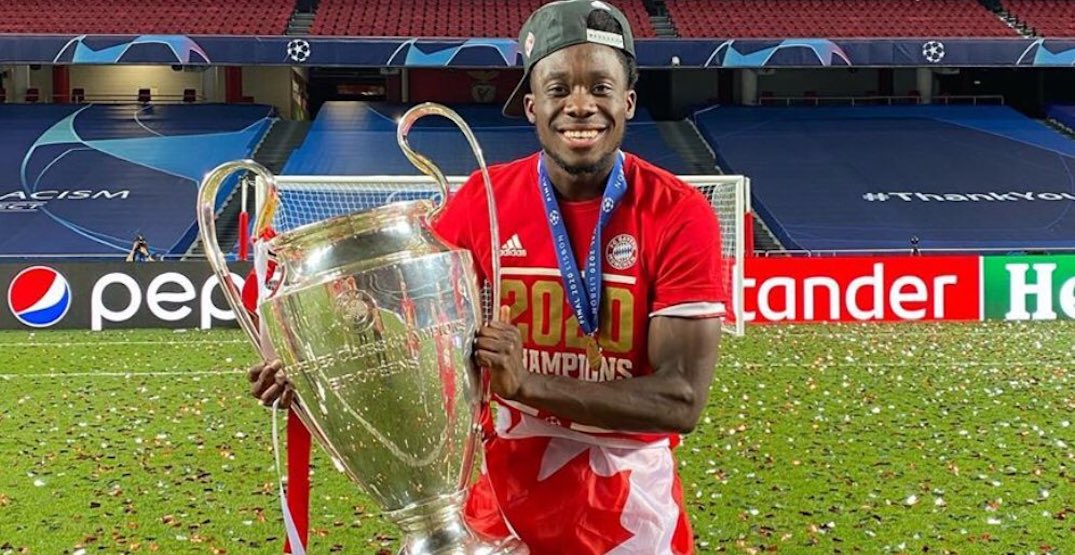 Alphonso Davies hasn’t forgotten where he came from, which is a more complicated journey than most Canadians.

Born in a refugee camp in Ghana to Liberian parents who fled a civil war in their country, Davies’ family moved to Edmonton when he was just five years old.

After making his pro debut with the Vancouver Whitecaps at age 15, Davies made the move to soccer superpower Bayern Munich after he turned 18 for an MLS record transfer fee.

The Canadian international has been worth every penny, as he’s already arguably the best left back in the world, and he’s still only 19. On Sunday, Davies helped Bayern capture the Champions League title as the champions of Europe, which is dream come true for Davies.

“I just want to say thank you guys for supporting back home,” Davies said after the match. “I don’t know, this is for you guys, I guess. Who would’ve ever thought — a guy from Canada, playing at a club like Bayern Munich, winning Champions League? Never would’ve guessed it.

“I think two years, if someone had told me this, I would’ve said, ‘Yeah, you’re lying.’ But I mean, dreams do come true. And I just want to say thank you everyone for supporting me back home.”

Davies encouraged everyone not to give up chasing their dreams in a tweet following the match.

This one for everyone who’s chasing a dream right now, take it from me don’t give up it may seem impossible now but just keep working on your kraft keep grinding 🙏🏾

His next tweet would point out how difficult playing soccer in Edmonton during the winter can be.

“Who would have guessed it a kid from Canada, Edmonton Alberta,” Davies said. “Most people don’t even know where that. Where it snows I’m talking -40 weather, he’s now a champion league winner.”

Who would have guessed it a kid from Canada, Edmonton Alberta. Most people don’t even know where that. Where it snows I’m talking -40 weather, he’s now a champion league winner 😌💪🏾🙏🏾 #AD19⚡️

Davies also took time to recognize his pride in being a refugee.

Thank you, it’s an honour to support @Refugees 🙌🏾

The outpouring of support for Davies has come from all over the world, including in the form of a follow on Instagram from Drake that he was very excited about, and a shoutout from Prime Minister Justin Trudeau.

Thank you Prime Minister @JustinTrudeau! Can I please come home for a week 🙏🏾😬

Davies’ victory also benefitted his former team, as the Vancouver Whitecaps will cash in a €500,000 bonus from Bayern Munich, which translates to about $780,000 CAD, for winning the Champions League.