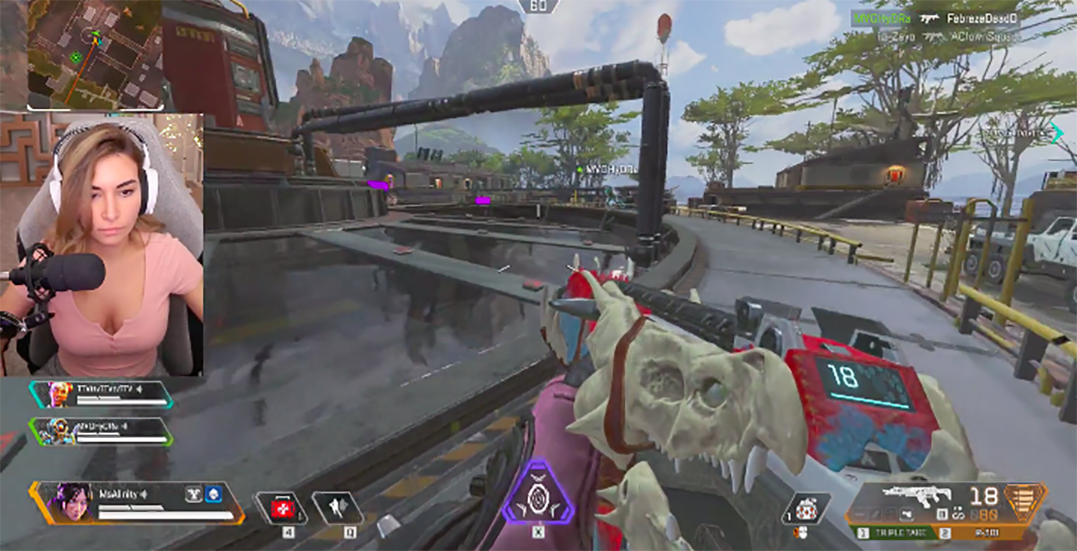 A Canadian video game streamer is being called out for animal abuse after an incident that took place during a live stream.

She streams the game Apex Legends, a popular, free-to-play shooting game made by Electronic Arts, and has amassed a very impressive Twitch following in the process — 892,000 followers.

Currently, however, Alinity is facing a large amount of public backlash and an investigation for animal abuse. Last week, a clip surfaced of what looks to be the streamer throwing her cat during play.

In today’s clown news, @AlinityTwitch throwing her cat on stream. Nothing justifies tossing an animal like this, but even so, she wasn’t even in a gunfight. Makes you really question what Twitch looks for in partners. #Alinity pic.twitter.com/4jtH2lMSNZ

The Twitter clip, which was posted on Thursday, July 18, has received more than 830,00 views along with mixed reactions from fans and other gamers.

Many users, were upset with the streamer’s actions, calling it animal abuse.

If you “game so hard” that you toss animals without any thought, it’s time to stop gaming or stop owning animals. This is coming from a gamer with 3 cats and 2 dogs. Even if cats land on their feet, doesn’t mean you need to fucking throw them like a basketball.. the fuck

They also say that it’s not the first time that she’s committed some form of animal abuse.

Clips of two separate incidents were unearthed. One clip shows her allegedly spit vodka into her cat’s mouth.

Another clip captures what looks to be the streamer kicking her dog.

Some users, however, have argued that the incident is being overplayed, explaining that the animal likely enjoyed being tossed.

Anyone who owns a cat has done this before. She didn’t flat out yeet the thing she just scooped it up and tossed him over the back of the chair to get it out of the way. I feel like a lot of people are just looking for an opportunity to tear someone down.

The incident also gained the attention of several animal protection organizations, who have stepped forward on social media.

For one, the PETA made the request for Alinity to be removed from Twitch, saying that the streamer uses the platform “to post animal abuse.”

Take a stand for cats & please remove Alinity from @Twitch immediately. She is using the platform to post animal abuse, which sends a dangerous message to anyone watching her videos. Cats are not props to abuse for more views 🐱pic.twitter.com/EsIsB5o6Tf

The Saskatoon SPCA has also said that a formal cruelty complaint was filed with their Animal Protection department and is currently under investigation.

A formal cruelty complaint regarding this matter has been filed with our Animal Protection department and is currently under investigation. If you have any further details, you can assist our Officers & add to the file be reporting here: https://t.co/72OVF5Puii. Thank you! #yxe

Shortly after the incident took place, Alinity issued an apology, explaining that she “dropped him on the floor behind [her] chair.” She emphasizes, however, that her animals are all “well-loved.”

“I also understand the desire to report me to pet authorities and encourage to do so if they feel pets are being mistreated,” she writes in a Tweet. “My animals are well-loved, and live in a warm and caring home, and I will comply with any authority that seeks to validate this.”

Hey everyone, I understand the concern and I am sorry for my lapses in judgement. I shouldnt have gotten frustrated with Milo, but I dropped him on the floor behind my chair. I’m not that strong 😛 . The Vodka thing was well over a year ago but it was also a stupid thing to do.

I also understand the desire to report me to pet authorities and encourage anyone to do so if they feel pets are being mistreated, by anyone, anywhere. My animals are well loved, and live in a warm and caring home, and I will comply with any authority that seeks to validate this.

I think a lot of people are doing this because they believe they are doing the right thing, so no salt. I dont pretend to be perfect, and I will always try to do better, and improve myself.
-Alinity pic.twitter.com/XrpJU5jIPo

Most recently, she posted on Twitter asking for upset fans to stop visiting her house “and asking [her] neighbours where [she is].”

Please stop coming to my house and asking my neighbours where I am. Its actually really scary

She also explained that the Saskatoon SPCA would be visiting her home over the next few days.

Called the @SaskatoonSPCA to come check these guys and the home out to clear up the complaints. They’ll be here in a couple days. pic.twitter.com/aDnL12Gw4J

The animal rescue society has yet to issue a formal statement.