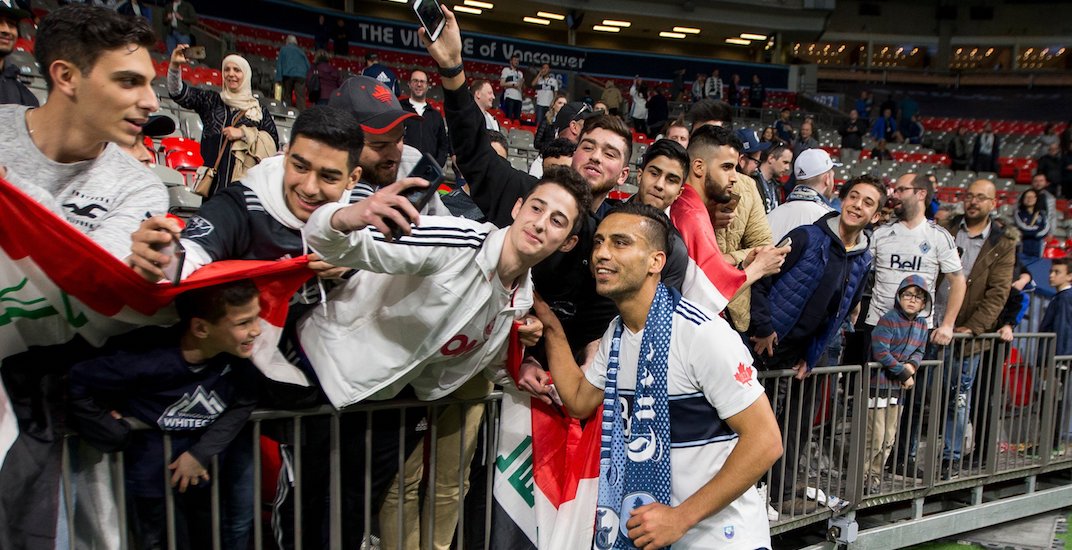 Ali Adnan is a man of the people.

The Iraqi fullback is back in Vancouver, preparing for his second season with the Whitecaps, which begins on February 29.

As a millionaire professional athlete, Adnan didn’t spend his offseason at a posh beachfront resort. Instead, he was back in Baghdad trying to boost the morale of protesters in his home country.

Giving back means everything to Adnan.

“Actually for a long time I’ve tried to help my country,” Adnan explained to Daily Hive this week. “When ISIS was coming there and then after ISIS, we are having problems again. I’m trying to help my country always. I was there six days outside of my house. I was actually just coming home to sleep, take a shower, change, and then go again to give them food. This is all what I have to do.”

We often see images of Iraq through media platforms that show a country trying to rebuild and recover after years of clashes and fighting that’s torn the region apart.

What you see on the news is not the same Iraq that Adnan grew up in.

The 26-year-old sees a warm, loving, and welcoming country. To see the people of his beloved country protesting for a better future is a call for him to reach out and help.

“I feel so good when I’m there,” Adnan explained. “People in the world just watch Iraq from the media, but I think Iraq has many things. Maybe one day you can be in Iraq and see the people there. You’re going to love these people and love this country. That’s why I’m always trying to help my country.”

“They’re so excited to see me because it’s a long time since they didn’t see me,” Adnan revealed. “We play (matches) most of the time outside of Iraq. We don’t play at home. When I’m there, I’m trying to help the people. They like to see me again. I’m going to try and always help my country.”

.@WhitecapsFC and Iraq defender @aliadnankadhem with his father and brothers in the middle of the protests in Tahrir square in Baghdad. 🇮🇶🇮🇶 pic.twitter.com/zyAUAvf2sW

When the Iraq war began in 2003, playing official matches in Iraq was not possible. It would take until May 9, 2017, for FIFA to lift a partial ban on international friendlies for the cities of Basra, Karbala, and Erbil.

The recent protests in 2019 meant that FIFA once again imposed a ban on international matches in Iraq.

“We haven’t played at home in a long time,” Adnan explained. “Every game we play, we’re looking at 30-35 million who are looking at our game. This gives us a lot, we have a big country, they support us a lot so we have to give them everything.”

“Every game we win it’s a like a gift to our country. We work in the field, fight in the field, just to win, to give a gift for the people. The people love football.

“When we play a national team and we win. All the people go out and they forget all the problems there.”

As an organization Adnan says the Whitecaps have supported him one-hundred percent.

“I want to say thank you to Marc, (Dos Santos) to all the staff, the team, the president. They all texted me and called me and told me if I need anything they are there to help. That’s a good thing to hear. I feel so good when I hear that.”

Adnan has gone above and beyond to offer his assistance to the people of Iraq. It’s easy to see why he has such a special connection and bond with fans all over the world.