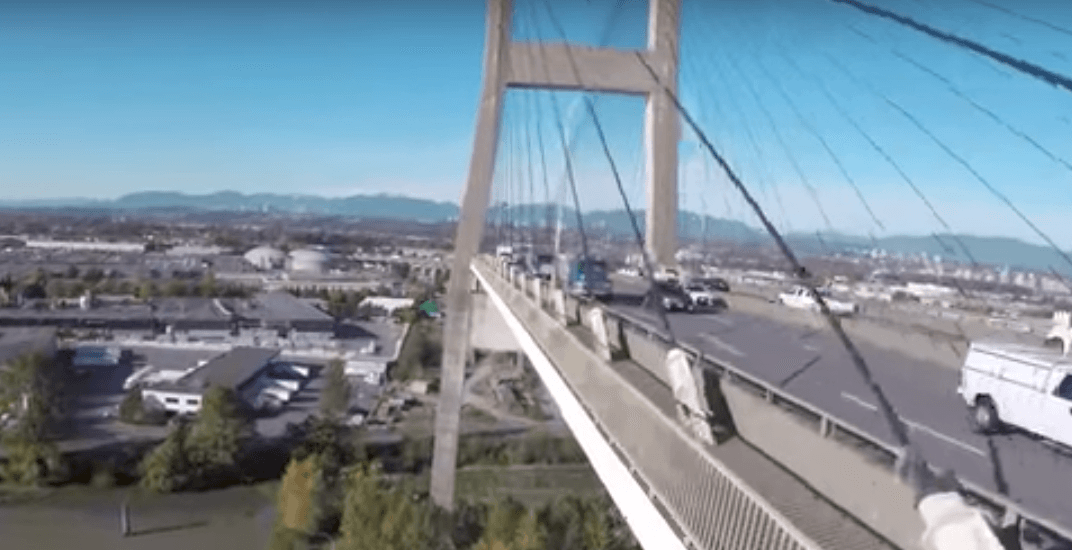 A drone video featuring the Alex Fraser Bridge could be illegal under Canadian law. (Youtube screencap)

A section of Highway 91 will have a significantly reduced speed limit — specifically, the Alex Fraser Bridge portion of the highway between Richmond and New Westminster.

The provincial government announced today the changes will occur tonight as part of the project that adds an additional lane of traffic to the bridge, which is controlled by a zipper-like counterflow.

This $70-million project increasing the total number of bridge lanes from six to seven will increase the crossing’s capacity. The reduced speeds are necessitated as a result of the narrower lane widths to accommodate the extra lane, with lanes now 3.55 metres wide — down from 3.7 metres.

To achieve this, construction work beginning this evening will temporarily shut down two lanes to allow crews to remove painted lines and install temporary markers for the northbound lanes. This work is expected to take three nights to complete.

Following the upcoming August long weekend, crews will return to the bridge to transition the southbound lanes and paint permanent lane lines.

The new additional counterflow-controlled lane on the bridge is expected to open later this year.

The Alex Fraser Bridge’s counterflow lane will be similar to the moveable zipper-like barrier system on the Golden Gate Bridge in San Francisco. (Party Of The Third Part / YouTube screenshot)