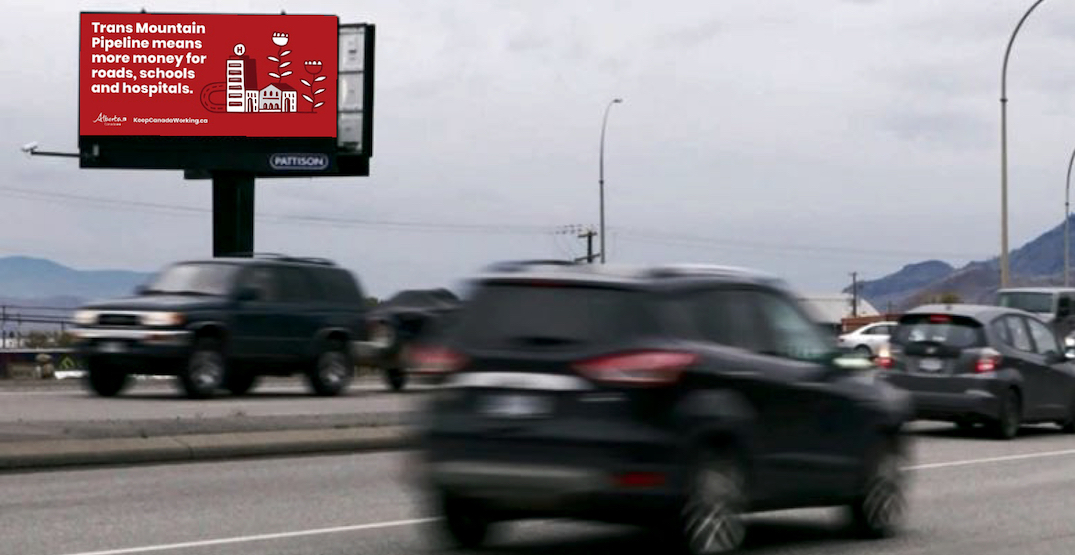 A Keep Canada Working billboard in Kelowna, BC (Province of Alberta)

It looks like the Province of Alberta is taking a page out of Mildred Hayes’ book, though they’ll be putting up a few more than three billboards when all is said and done.

Alberta, BC, and the federal government have been at odds for the past few months, with British Columbia battling for the rights to restrict the amount of bitumen that can flow to its shores — a court case that, if won, could stop the pipeline expansion in its tracks.

The uncertainty created by BC’s actions has already caused Kinder Morgan to suspend all non-essential spending on the project and set a May 31 deadline for a decision on if the project will ultimately go forward.

According to a release from the Province of Alberta, the cost of Alberta’s resources being blocked from BC’s shores — and therefore the international market — is up to $15 billion annually for the Canadian economy.

“It is important that Canadians understand what’s at stake when we talk about the Trans Mountain Pipeline expansion,” Alberta Premier Rachel Notley said in the release.

Alberta has already spent a total of $1.29 million on the ad campaign, and though the advertisements can be seen all across Canada, more than half that funding has gone into advertising in British Columbia — $700,000, to be exact.

Currently, the campaign’s billboards can be seen at locations in Vancouver, Victoria, Kelowna, Kamloops, the west Kootenays, and the airports in Abbotsford and Nanaimo.

Television and radio advertisements are in production, according to the release, and Canadians can expect to hear and see these messages “until the pipeline is in operation.”