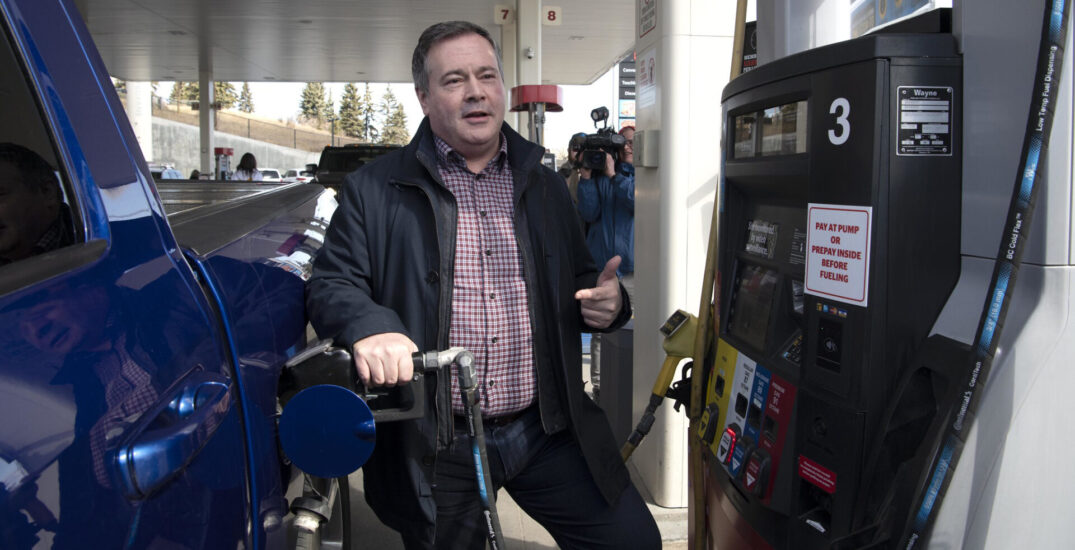 If you’ve been having a hard time at the gas pumps lately, you’re not alone: Alberta Premier Jason Kenney ran into trouble putting fuel in his truck last week in Calgary.

That said, Kenney’s struggle may have been a little different than the rest of the population.

While many Albertans are feeling the effects of high fuel prices and may be avoiding filling up their vehicles as much as usual, the premier had a problem after filling up.

Video shared on social media shows the Alberta premier having difficulty removing the fuel pump from the gas tank of a bright blue truck on Friday, April 1. Kenney was at the Co-op Gas Station Mission location at 3623 Macleod Trail SE in Calgary, following a press conference announcing the Alberta government’s lifting of fuel tax in the province.

From earlier today, Premier Jason Kenney had some issues after filling up his truck with gas. Yet another reason why I would never want to be a politician and surrounded by cameras. pic.twitter.com/Jsgxz1f31p

Of course, the Internet had plenty to say about the premier’s mishap, with some making fun of him (“This man has never pumped gas in his life ⛽️”) while others offered words of sympathy (“I had one of those Rams. And the nozzles get stuck a lot. Its a really shit design.”)

My 80 year old mother who lived in NJ most of her life doesn’t know how to pump gas. Now she lives down the street & every so often I have to take her to the gas station & fill up her car.

I think she could learn to do it but that PLUS the credit card computer is just too much. pic.twitter.com/ewvuMwUIEj

I really, really want to see who came to his rescue. He’s looking off camera right at the end of the clip, with pleading eyes.

No that’s just uh, our Secret Method, of doing it the right way! Honest! 🤣

We all gotta start somewhere, but MAYBE do a pre-show or systems check before starting the photo op. 🤣

Nothing says ‘Man Of The People’ like a guy who has clearly never pumped his own gas before. I do enjoy the tradition of Alberta conservatives embarrassing themselves at gas stations, though. #ABLeghttps://t.co/LZiuvrAx4x

It’s amazing that he can dress himself every morning.

Starting to understand why there’s no Mrs Kenney.

Even Kenney and his team got in on the joke, sharing a meme to the premier’s Instagram on Sunday profiling an “Instagram vs. reality” situation.

No matter what kind of trouble you’ve been having at the gas pumps lately, hopefully, the fuel tax break that kicked in in Alberta on Friday offers a little bit of relief!

In addition to the tax break, the province also announced on April 1 that the Alberta government will provide $150 in electricity rebates to more than one million eligible homes, farms, and businesses across the province that have been affected by above-average consumption costs over the past several months.

Additionally, a natural gas relief program, announced as part of the province’s Budget 2022, will see eligible consumers receive a rebate when natural gas prices exceed $6.50 per gigajoule starting in October.

Further details about both programs are expected to be announced in the coming weeks.